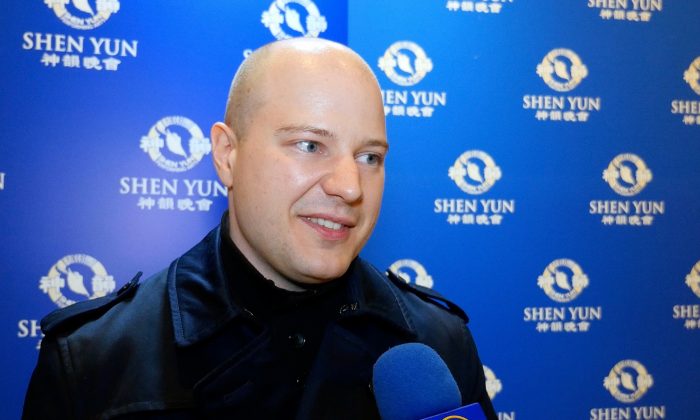 NEW YORK—Clarinet virtuoso Alexey Gorokholinsky was, until just recently, at the Juilliard School just around the corner from Lincoln Center, but hadn’t ever set foot into the David H. Koch theater.

To his delight, his first experience of the theater’s acoustics was during a performance that had a unique ensemble—an orchestra that included the ancient Chinese instruments of the pipa and erhu as permanent members.

Mr. Gorokholinsky had just seen opening night of Shen Yun Performing Arts, and he wanted to tell his colleagues: “Go see the show! Drop everything, stop practicing and go see the show. It’s just across the street.”

At age 7, Mr. Gorokholinsky picked up the clarinet and has since won various awards in the United States and recorded multiple CDs. At 28, he is considered one of the most versatile virtuosos and has interests in exploring new possibilities for the clarinet.

“Really love the music,” Mr. Gorokholinsky said about Shen Yun on March 2. “The entire string section sounds very mellow and warm, like warmer than traditional symphony orchestras, and the brass section is excellent too, so, really love the sound.”

As for the clarinet, he noticed the instrument used to create interesting characterizations.

Depending on which dance was performed, the clarinet was used in different ways, he said. In a story-based dance about the Monkey King, it “actually has that bit of a cartoonish character.”

“The actual arrangement fit the clarinet so well, especially when there were a number of spots where the clarinet [was] on its own soloing, with the instruments accompanying. So the balance was perfect. It was very good.”

In about 20 vignettes, the New York-based company covers 5,000 years of Chinese history. Through music and dance, audience members visit the snowcapped Himalayas in a Tibetan folk dance, witness the testy ascension of an emperor in the Qing Dynasty, and are taken back in time as a Chinese creation myth unfolds. According to its website, Shen Yun was formed with the mission of reviving the authentic traditional Chinese culture not found in China today.

Mr. Gorokholinsky was impressed on many levels with the dance.

The scene would darken and four seconds later—he counted—new dancers in new costumes were in their places. “In a perfect pose. Four seconds. Unbelievable.”

Another thing that came to mind was how still the dancers are at the end of a physically demanding dance, as the curtain starts to fall and one might expect them to wilt, be out of breath but with a smile.

“But with them it’s like a frozen picture,” he said. After impossible leaps and endless flips, “you can’t even see them breathe. That takes a huge control.”

And the dancers weren’t just working together with the music, but they also coordinated with a digitally animated backdrop. “When they throw something, it just flies away. So well done,” he said, describing how action onstage seemed to literally become an animated figure.

“The coordination, the dancers, the very elegant movement of all the dancers, which again comes from the culture, incredible elegance, flow,” were all things that “will stay with me for sure,” he said. “So elegant and flawless.”