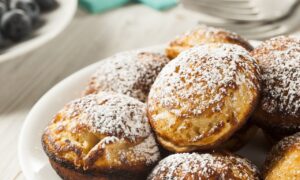 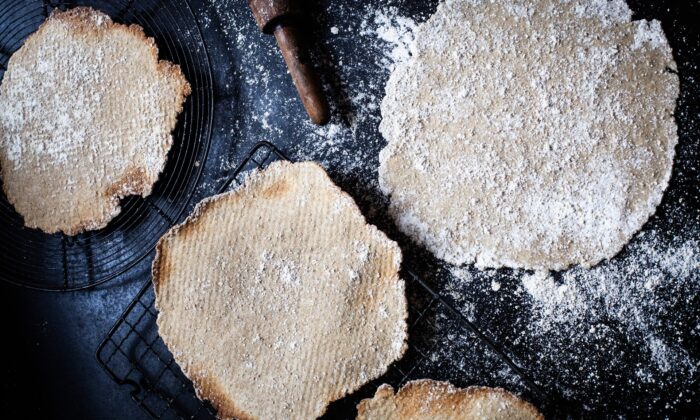 Clapcake, clapbread, or havercake from Cumbria, northern England, and clap scones from Scotland, resemble the thin crispbread we usually associate only with Scandinavia. “The Diary of Celia Fiennes” from 1698 tells us how these clapcakes were made in Cumbria:

They mix their flour with water, so soft as to rowle it in their hands into a ball, and then they have a board made round and something hollow in the middle riseing by degrees all round to the Edge a little higher, but so little as one would take it to be only a board warp’d, this is to Cast out the Cake thinn and so they Clap it round and drive it to ye Edge in a Due proportion till drove as thinn as a paper and still they Clap it and drive it round, and then they have a plaite of iron same size with their Clap board, and so shove off the Cake on it and so set it on Coales and bake it…

After being baked, the clapcake was dried in front of a fire on a special wooden rack called a “havercake maiden,” which looks like a miniature bench. Celia also writes that people dipped it in milk, ate it with meat, or simply smeared it with butter, and that it was the only bread eaten in this region unless you lived close to a market town where there were regular markets.

Novelist Elizabeth Gaskell described the drying of clapcakes in 1863: “The great rack of clap-bread hung overhead, and Bell Robson’s preference of this kind of oat-cake over the leavened and partly sour kind used in Yorkshire was another source of her unpopularity.” Historian Peter Brears found a later reference to clapcake in the 1940s, when a Dr. Henry Bedford recorded them still being made in the Lake Counties.

Today clapcake is, unfortunately, largely forgotten. It’s a shame, because it is a versatile oatcake suitable for various applications, great for breakfast or lunch with cheese, jam, or even chocolate spread, but it’s also perfect to serve with a cheese platter or dips. I regularly bake a batch of clapcakes, and they keep for up to a month in a sturdy brown paper bag—they become rather like cardboard when kept in an airtight container. Clapcakes can be revived by putting them in a hot oven for a few minutes.

Although not traditional, rolling different types of seeds, such as caraway, into the dough as they do in Scandinavia makes for a nice variation. I add a little regular flour to this batter because it makes for an easier batter, but feel free to use all oat flour.

Makes 4 individual 8-inch clapcakes, or 1 to 2 larger ones

Preheat your oven to 450 degrees F.

Melt the lard in the boiling water. Mix in the flours, baking powder, and salt to make a smooth dough. Mix with a wooden spoon and, once it is cool enough, knead well by hand. If the dough remains too wet (this will depend on the age of your flour), add a little more flour until the dough is no longer sticky.

Divide the dough into portions or leave it whole if you are making one large clapcake. On a sheet of parchment paper generously dusted with oat flour, roll out the dough to a thickness of 1/16 inch (or as thin as possible). Use a Scandinavian knobbly rolling pin if you have one.

Using the parchment paper, slide the clapcake(s) onto a baking sheet. Bake in the middle of the oven for 15 minutes, then turn and bake for another 5 minutes. Let the clapcakes cool on a wire rack. Clapcakes keep for a very long time in a sturdy brown paper bag.

Reprinted from “The British Baking Book: The History of British Baking, Savory and Sweet” by Regula Ysewijn, with permission from Weldon Owen Publishers.