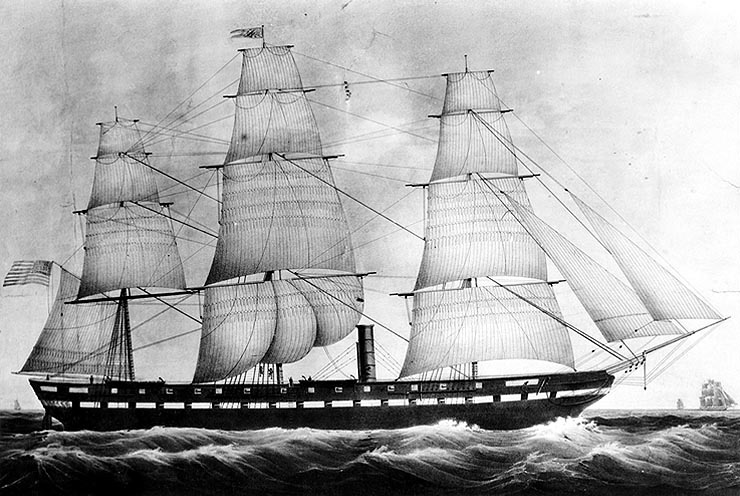 Participating vessels in the historic 1862 battle have been given various names—so has the battle itself
BY John Quarstein TIMEJanuary 27, 2022 PRINT

The battle that changed naval warfare forevermore, the Battle of Hampton Roads, is one of history’s 10 greatest ship-to-ship engagements. No longer would wooden warships rule the waves. Armored, turreted ships with heavy rifled guns would dominate the seas for the next 75 years. Despite all the battle’s acclaim, the names of the ships and of the engagement itself are numerous and various.

The March 8–9, 1862 Battle of Hampton Roads, similar to many other Civil War battles, has many titles. Nevertheless, no matter what you might call it, the battle is always recognized as a change agent. Often it is called “Clash of Iron,” “Monitor vs. Merrimac,” or “Battle of the Ironclads.” This naval engagement was really two distinct battles: the sinking of the wooden warships USS Cumberland and USS Congress by CSS Virginia on March 8, and the March 9 fight between the Monitor and the Virginia. Since it was fought in the harbor of Hampton Roads, Virginia, over two days and changed naval warfare forever, the battle’s name should be the Battle of Hampton Roads.

This somewhat confusing choice of names raises another question: What is the proper name of the Confederate ironclad that sank two Union capital ships and fought USS Monitor to a standstill? Is it Merrimac, Merrimack, or Virginia?

USS Monitor does not suffer from this type of identity crisis. The Union ironclad inventor, John Ericsson, was asked by Assistant Secretary of the Navy Gustavus Vasa Fox to give the new ironclad, referred to as “Ericsson Battery” while under construction, a proper name. Since Ericsson believed that his innovative ironclad’s “impregnable nature and aggressive character … will admonish the leaders of the Southern Rebellion,” as well as prove to be a monitor to the British Navy’s ironclad production, he proposed to name the new battery “Monitor.” The ironclad was such a success that “Monitor” became the name of an entire class and type of warship.

The Confederate ironclad’s name, however, is consistently inaccurate. The most common usage is “Merrimac.” This reference, used by Civil War participants and historians ever since, is incorrect. The steam and sail powered forty-gun frigate with a screw propeller built at Charlestown Navy Yard was named USS Merrimack by John Lenthall, Chief of the U.S. Bureau of Naval Construction, on September 25, 1854. Naval constructor E.H. Delano, who designed the frigate, noted the ship’s name as “Merrimack” in his plans. This warship was the first of a class of six frigates built during the 1850s. Each of the ships was named for an American river: Roanoke, Wabash, Colorado, Minnesota, and Niagara. President Franklin Pierce—who was a native of Concord, New Hampshire, the county seat of Merrimack County, located on the Merrimack River—approved the construction of this class. He signed the act approving the appropriation and the ship names on April 6, 1854. The frigate to be built at the Charlestown Navy Yard in Boston was spelled “Merrimack.”

Even though this evidence clearly documents that the frigate’s name should always be spelled with a “k” as it was named in honor of the Merrimack River, confusion concerning the river’s spelling is commonplace. The first written reference dates to 1691 during the reign of William and Mary, noting the northern boundary of Massachusetts as 3 miles north of the Merrimack River. Other references to the Merrimack spelling include Governor Thomas Hutchinson’s 1764 “History of the Province of Massachusetts.” “Merrimack” is a Native American word said to mean “swift water.” By the mid-19th century, many writers, Henry David Thoreau excepted, had begun to drop the “k.” It appears that the spelling Merrimack with the “k” is more often used at places along the river above Haverhill, Massachusetts, a city located at the head of navigation.

Merrimac without the “k” is the popular spelling below Haverhill. The river formed the Merrimack Valley, which is often referred to as Merrimac Valley. This region was a major textile manufacturing area. One town in the region is named Merrimac, Massachusetts, but was not established until 1876. This circumstance, and the fact that it is easier to spell Merrimack with just a “c” rather than a “k,” is perhaps why so many Civil War contemporaries used the term Merrimac when writing about the frigate. The Boston Evening Transcript on June 15, 1855, referred to the frigate as “Merrimac.”

Once the Confederates raised the burned hull of the frigate, it was configured into an ironclad christened on February 17, 1862, as CSS Virginia. Confederate Secretary of the Navy Stephen R. Mallory and Flag Officer Franklin Buchanan, whose flagship was Virginia, both referred to the ironclad in all of their correspondence after this date as Virginia. Consequently, from February 17, 1862, the ironclad should always be called Virginia. Unfortunately, few immediately recognized this technicality, as even both the ironclad’s executive officer, Lieutenant Catesby ap Roger Jones, and its chief engineer, H. Ashton Ramsay, called the vessel “Merrimac.” Both of these men served on the frigate prior to the war, which may have caused the continued usage of Merrimac as the ship’s name. The Southern publications usually referred to the vessel by its rechristened name CSS Virginia; however, Northern newspapers constantly used the name Merrimac without the “k.”

And Virginia was her name, not Merrimac, which has a nasal twang equally abhorrent to the sentiment and to melody, and meanly compares with the sonorous sweetness of Virginia. She fought under Confederate colors, and her fame belongs to all of us; but there was a peculiar fitness in the name we gave her. In Virginia, of Virginia iron and wood, and by Virginians she was built, and in Virginia’s waters, now made classic by her exploits, she made a record which shall live together.

The Confederate ironclad CSS Virginia will forever be indiscriminately called Merrimac, Merrimack, and Virginia. Whatever name is used, CSS Virginia should always be remembered as the vessel that proved once and for all that iron ships would rule the waves.