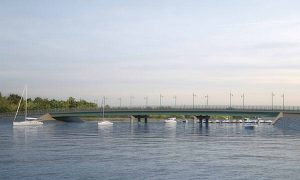 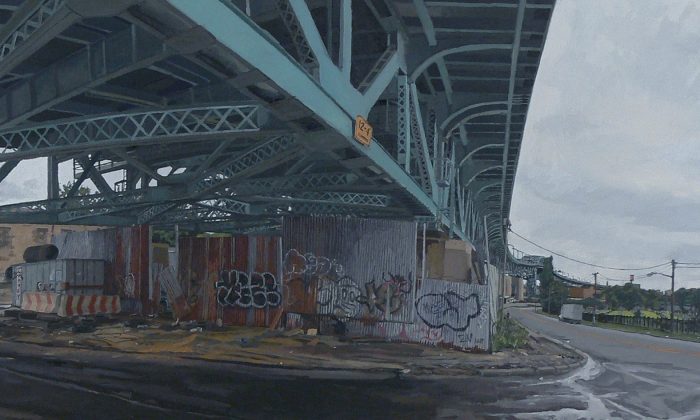 NEW YORK—The five boroughs of New York City are crisscrossed by a whopping 789 bridges, the undersides of which often mesmerize painters, judging by this year’s cityscapes show at the George Billis Gallery.

This year, nearly 30 artists are represented in the exhibit. Surprisingly, though many also paint other genres, the vast majority focus on cityscapes, according to Billis. Many are New Yorkers, but some hail from cities across the nation.

“Even if they are not native New Yorkers, or displaced New Yorkers, everybody loves New York—it resonates with them,” Billis said.

The geographical diversity of these artists, who are unconnected by any school or style, makes one wonder if cityscapes will rival landscape as a major genre in representational art as America continues to urbanize.

Do bridges make a good subject for an exhibit? The bridge is an extremely narrow focus, but a powerful one—one that acts as a metaphor for connecting people, as a symbol of industry, and where they extend over bodies of water, as an object of meditation.

Bridges, perhaps more than any other single urban structure, have the ability to capture the moods of a city.

Anyone who has ever taken a walk early on a Sunday morning and finds himself cloaked in a mist so thick it that dampens all sound will connect with Nicholas Evans-Cato’s “Dragon.” In it, the Brooklyn and Manhattan bridges are bathed in a violet fog.

Derek Buckner’s “Factories, Evening Light” is built of dancing clouds and blocks of vibrant color. With brushwork reminiscent of Eastman Johnson, the Brooklyn artist juxtaposes rusty factory neighborhoods next to skies so glorious, they ought to hang over idyllic pastures.

Beñat Iglesias Lopez, known for his whimsical, sometimes eerily realistic figural sculptures (http://www.benatiglesias.com/b/work_The_Bathers_2.html), presents a series of seven small paintings of the George Washington Bridge, Brooklyn Bridge, and Queensboro Bridge. Their rich umbers warm our perception of these otherwise underrated locations with a touch of nostalgia.

Three watercolor pieces from Tim Saternow provide a welcome reprieve from the works in oil so heavily represented in the show. Painting his street scenes on raw-edged paper and then splattering them with watermarks, Saternow captures the feel of crumbling, ancient overpasses as seen through sooty windows.

Other artists trained their eyes on form and architecture.

Dennis D’Amelio, in a crisp, almost illustrative style, paints the industrial areas around the East River. His training in welding and metal design at the Pratt Institute is apparent in the precise lines of buildings.

James Oliver’s paint-by-numbers, blocky style works well for his subject of skylines, whereas Roland Kulla’s “Queensboro” explores the rhythm and geometry of a cantilever bridge’s complex angles. Shadows play upon its trusses and rivets, creating an intricate jungle gym that the eye wants to climb over and over again.

At heart, New York is a town of worn roads and roughened spirits, one upon which shiny glass condos and ever-posher storefronts are overlaid. New Yorkers know this fact, but sometimes become so desensitized to it that we need the lens of art to reveal its obviousness to us.

Detroit artist Stephen Magsig captured this succinctly in a subterranean view. Framed by the dark concrete of a subway exit, a square of blue sky welcomes us as we reappear in a different neighborhood as if by magic. It’s revelatory to see this familiar scene articulated in painted form.

There are very few pedestrians or other human figures here. All in all, this exhibit of cityscapes is really about revelations gained while walking in an urban landscape—whether alone at the water’s edge hurrying through a sketchy part of town, or crossing the street on a rainy day. A sense of deep communion with an impersonal city permeates all of these works.

After the current exhibit closes, George Billis Gallery will open Industrial Beauty, from which visitors should expect the same grit, minus bridges.