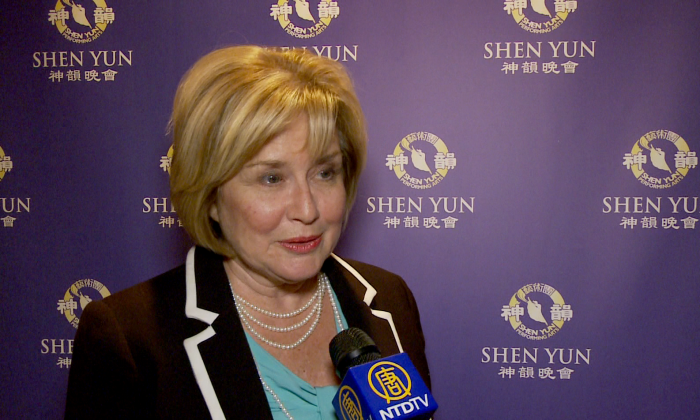 Blair Lancaster, Ward 6 city councilor of the city of Burlington, saw Shen Yun Performing Arts for the first time at Hamilton Place Theatre on May 11, 2016 and found that it was exactly as wonderful as what others had told her. (NTD Television)
Canada

City Councillor: Shen Yun’s ‘Message Is a Very Beautiful One’

HAMILTON, Canada—Blair Lancaster, Ward 6 city councillor of the city of Burlington, saw Shen Yun Performing Arts for the first time at Hamilton Place Theatre on May 11 and found that it was exactly as wonderful as what others had told her.

“It’s interesting because I did talk about it a lot and let people know that I was coming, and a lot of people had seen it before and all they said is, ‘You will love it. It’s really enjoyable.'”

After seeing the renowned classical Chinese dance and music production for herself, accompanied by her mother, Ms. Lancaster had the same high praise to give.

You heard the audience gasp sometimes because the dancers were so high and so creative.
— Blair Lancaster

“It was wonderful, it was great,” she said. “The dancing was absolutely amazing, and the movement was so beautiful. … It was really, really pretty and beautiful, and it made you feel very light.”

An element of the performance that stood out for Ms. Lancaster was the technical skill of the dancers. They are masters of some very difficult jumping and tumbling techniques that are part of classical Chinese dance, one of the most comprehensive dance systems in the world.

“You heard the audience gasp sometimes because the dancers were so high and so creative,” she said.

Another highlight for Ms. Lancaster was the unique Shen Yun Orchestra, which blends the sounds of East and West, with traditional Chinese instruments leading the melodies while a Western orchestra plays the foundation.

“Reading the program, it gave you that background so you understood what you were hearing, so I thought that was really helpful,” she said.

“But hearing the instruments and being able to find them and then understand a little bit about the history was really neat, too, and combining them both was great. It made it very exciting and fun.”

The solo of the erhu, known as the Chinese violin, “was very special,” Ms. Lancaster said. “I closed my eyes and I just listened, and it took you to another place, I think. It was very relaxing, very beautiful, but the sounds really had an impact on you.”

Ms. Lancaster found the show to be a great introduction to Chinese culture, and indeed the mission of New York-based Shen Yun is to revive the traditional culture of China, an ancient heritage whose essence lies in a deep belief in virtue and faith in the divine.

Among the pieces are stories and legends that span China’s 5,000 years of history. Part of this history is unfortunate events unfolding in contemporary China under communist rule, such as destruction of the traditional culture’s spiritual essence, and peaceful resistance by people of conscience against persecution.

“I have a better understanding of a culture, and to understand really what the current state is, all of those things combined brought another sort of sense or meaning to what we enjoyed tonight,” Ms. Lancaster said.

That moral and spiritual essence of traditional Chinese culture was something that Ms. Lancaster found inspiring.

“The message is a very beautiful one, one in which we should all be living [in] our lives,” she said.

What we aspire to be in Heaven is what we should aspire to be on Earth, Ms. Lancaster said. “That’s what we’re all trying to be as better people, and if the inspiration is Heaven, then the closer you get to being a better person, the more heavenly you become.

“I love experiencing other cultures. I love learning to understand them and to really see how they express themselves, and that’s what we saw tonight,” she said.

“It is beautiful for sure.”