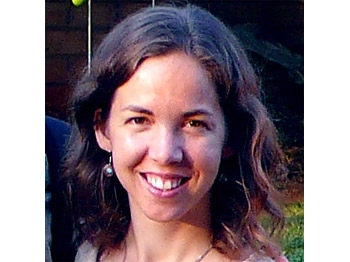 Citizens of the World: Aaron and Celeste Froehlich, Part I

Her undergraduate semesters at Friends World College started when she was 18. Her college semesters were in Palestine, Israel, Jordan, India, and Japan.

A touchstone experience came during the semester in Jerusalem.

She says, “It was a mystical city. A palpable sense of walking on sacred ground was ever-present. I walked the twisted cobblestone streets of the Old City, never knowing where I will find myself—hiking the hills or camped in the Negev desert or floating in the immense silence of the Dead Sea.

“I felt blessed to be seeking my own spiritual path in a land sacred to many generations and peoples.”

No doubt her personal history and education at Exeter had done the groundwork.

Celeste was born in Phoenix. Her mother’s background was Episcopalian, and the father’s was Irish Catholic. When she was 5, her parents divorced.

For a while, the father continued to live in their yellow house in Phoenix. Celeste remembers the smell of the peaches and plums in their garden.

Her mother settled in a red brick house in downtown Phoenix. Celeste remembers the smell of mulberries around the house.

Celeste’s stepfather is a Sikh. All her life, she had heard from him of the Golden Temple of Amritsar, most sacred to Sikhs.

“In India, I remember the stark juxtaposition of human suffering and the contrasting spiritual grandeur of temples, mosques, and churches.”

She remembers in particular the Golden Temple in Amritsar. She says, “When I saw it, it was even more magnificent. But the human side was an experience new to me.

“I would go to the temple, at 4:30 in the morning, bathe in the resounding chanting over the misty water, and then go home to eat and sleep with the girls in the orphanage who had been through so much.”

Celeste did not feel the prejudice of the North to the South, or vice versa, as if she knew A. L. Basham’s book, The Wonder That Was India (Oxford University Press, 1998).

She saw the ancient South Indian Temple on the shore at Mahabalipuram and the four granite temples rising from the sea … and she remembers the carvings of gods, beasts, and people on granite walls of temples.

From Kerala, she remembers the ancient churches, the Jewish temple in what is still called Jew Town, the Chinese fishing nets of the fishermen, and the palm-lined backwaters.

Of the semester in Kyoto, Japan, city of magnificent temples, she says, “I had never dined so well on traditional Japanese meals every night as I did in Kyoto.”

Later, in graduate school in Chicago, she worked on the language and culture of the Native American Lakota Sioux Indians with the Catholic Union Theological Seminary.

She trained as a therapist at the University of Chicago’s Social Service Administration, specializing in Trauma Healing and Reconciliation for refugees and survivors of torture.

She says, “I went to Rwanda and worked with Friends Peace House. I will never forget the stories of the survivors and what they taught me about the incredible resilience of the human spirit.”

In the end, Celeste and Aaron started looking for a place to put down roots and raise their boys, David and Eli.

“We have been interested in community for a very long time. EcoVillage looked like the place we had been dreaming of. Now I hope our journey will be into the heart of deep relationships,” she says.

She works halftime as a therapist at a family-service agency, and she home schools her sons at EcoVillage.

After I met Celeste, I found one more reason to be grateful to the Quakers. In 1959, they invited me and another faculty person from Delhi University for an afternoon of quiet, soft-spoken conversation with Martin Luther King Jr.