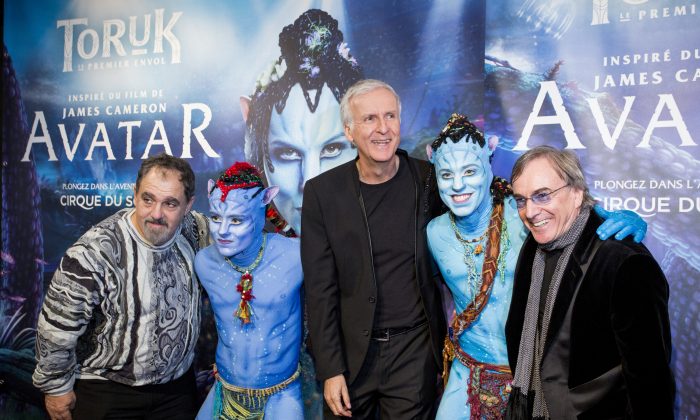 TORONTO—It’s been six years in the making, and now Cirque du Soleil’s “Toruk” is setting up camp in North American stadiums, bringing audiences the magical world of the moon Pandora and its inhabitants from James Cameron’s blockbuster “Avatar.”

Having had its world premiere in Montreal from Dec. 21–Jan. 3, “Toruk – The First Flight” plays in Toronto from Jan. 7–10 and will then go on to other cities in Canada and the U.S.

“If you’re a Cirque fan or an ‘Avatar’ fan, go there with an open mind to see something inspiring, which is very much a new direction for Cirque du Soleil,” says Fabrice Lemire, the show’s artistic director.

“The ‘wow’ factor will be there, but it’s not just going to be based on the acrobatics.  We have a beautiful marriage of the new technology—the projections, which are phenomenal—with something classical like puppetry.”

“It’s a beautiful exercise for the performers,” he adds, explaining that the artists are asked not only to do tricks but also to interpret a character, sometimes even vocally. In those cases, they are asked to speak in the Na’vi language of the Pandora inhabitants first introduced in the film.

To guide the story along, Cirque has brought in a narrator—also a first for the internationally renowned Canadian performing arts company that has put together 37 distinct shows since its founding in 1984.

Lemire believes audiences will be transported into the world of “Avatar” through the new show. Cameron himself has been involved throughout the creation process, contributing to the vision of “Toruk,” which calls for respect for nature and humanity.

“I’m looking at it as if you were going for an excursion to an island like Madagascar, and you explore the fauna and flora and the life on that island. It’s pretty much what you do in the film,” Lemire explains.

“You have this exploration of the environment and the way those tribes co-exist and live together.”

The story of “Toruk” is set 3,000 years before “Avatar,” long before humans set foot on Pandora.  It tells of a quest to find the mysterious creature Toruk, the only one who can save the sacred Tree of Souls from destruction.

Lemire believes that at the heart of both Cameron’s film and Cirque’s presentation is the idea that if people come together, they can succeed in whatever they need to accomplish.

“We all dream of getting together and fixing the world, and that’s what this is about,” he says, noting “Toruk” delivers the message that people should embrace differences in society and not hurt those who think differently from themselves.

“Why always look at the wrong in people, while there is always beauty in front of us—and this show is all about beauty.”

For Lemire, the concepts of optimism and cooperation reflected in “Toruk” resonate with his own joyful approach to life.

“I need to see smiles on my team’s [faces] every single day when I go to work. I’m not asking them to smile because they have to smile, I just want them to really feel it,” he says.

Fundamentally, his wish is to grow old with the mind of a child.

“The child will be fascinated by everything he sees around himself and he will ask questions,” he says, adding that he wants to continually inspire himself and not fall into rigid patterns.

“Every time you go out the door you should have inspiration, and the inspiration should start within yourself when you get up in the morning.”