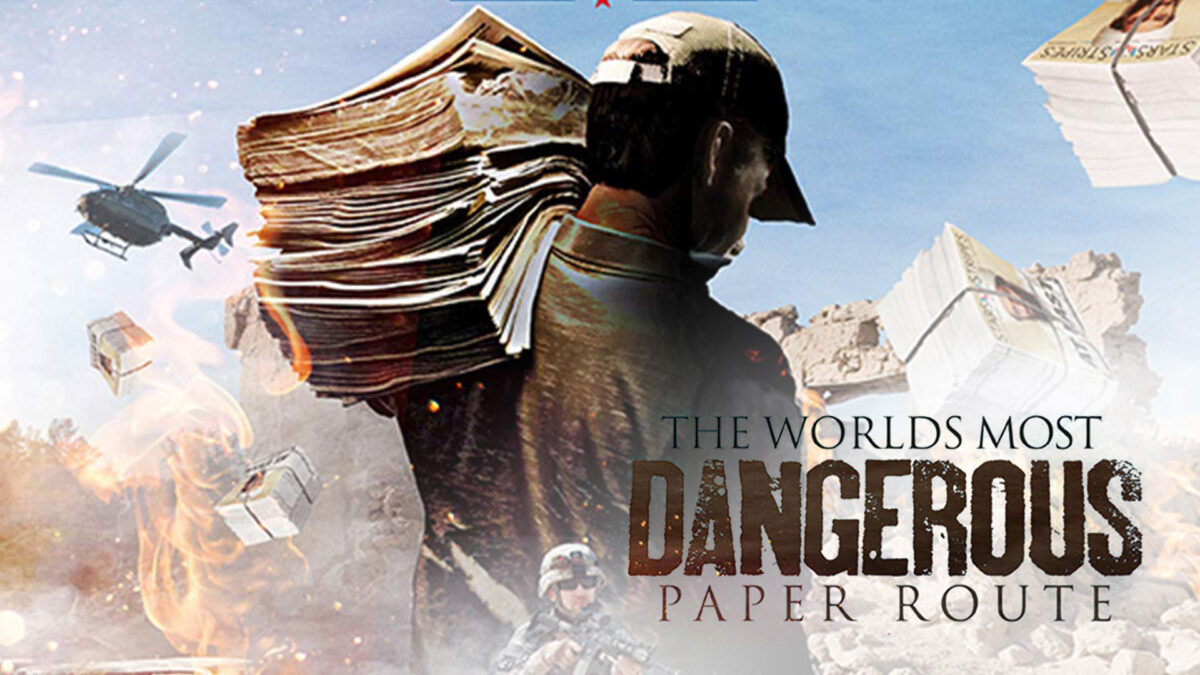 Chronicling a newspaper that serves as a vital link for military personnel.
BY Ian Kane TIMEMay 23, 2022 PRINT

It doesn’t matter what branch of the U.S. Armed Forces you’re in; being assigned overseas can make you yearn for home … badly. Especially if you’re a young buck and it’s your first time being far away from home. Being in a combat zone on top of that can exacerbate things because now you not only miss your loved ones dearly (and everything familiar to you), but also have to worry about getting filled with bullets or blown to smithereens, and therefore not making it back home at all.

In many cases, military personnel overseas don’t have access to the usual forms of communication those back in the states do. So, printed materials may be all that some troops have access to. This can come in the form of snail mail, or a newspaper called the “Stars and Stripes.”

Vanilla Fire Productions recently produced a documentary on the storied newspaper titled “The World’s Most Dangerous Paper Route,” which details the history of this military publication and provides insights from the numerous journalists who have worked for it.

The film is narrated by Steve Kroft, a former CBS News “60 Minutes” reporter who was a journalist who was embedded with combat troops during the Vietnam War. His narration style is perfect for the film—sometimes dry, and others snarky. The Stars and Stripe newspaper has been around for more than one hundred and fifty years, and although it is officially part of the Department of Defense, it is an independent newspaper that has to raise much of its funding through its readers.

Thus, as one journalist describes it, the Stars and Stripes isn’t a mouthpiece for the military, but rather quite the opposite. It’s a nonbiased newspaper that believes in delivering the facts, no matter what those facts are. That isn’t to say that at some points in time, the newspaper’s independence hasn’t been threatened from time and time, by both political pressures and censorship.

One humorous example of this is when a young rifleman named Bill Mauldin created a serial cartoon called “Willie and Joe” during World War II. Mauldin’s cartoon depicted a couple of unshaven, grubby-looking soldiers in wrinkled uniforms and poked fun at Gen. George Patton’s insistence that soldiers maintain spartan uniforms and cleanliness standards, even while in rough and dirty battlefield environments.

Gen. Patton eventually became incensed with Mauldin’s cartoons and ordered him to stop creating them. However, Gen. Eisenhower pulled rank over Gen. Patton, clearing the censorship of Mauldin, who joyfully continued on with his wildly popular strip.

The film also touches on more serious matters, such as the dangers many journalists take to cover unfolding action in the field while embedded with combat units. At certain points, some of them traversed into very dangerous territories and reported feelings of exhilaration—one even says he felt a “high” after being shot at.

Audiences also get an upfront view of the grit, selflessness, and bravery of not only the troops who risk their lives to protect our freedom but also the journalists who cover what’s happening on the frontlines. The latter are those who also are tasked with also delivering the Stars and Stripes newspaper to troops in combat zones; hence the film’s title.

“The World’s Most Dangerous Paper Route” is a well-rounded documentary that I really enjoyed watching. Each of the stories that are told throughout the film gives unique, and sometimes humorous, insights. It’s also expertly shot and historically informative. This documentary is a great watch for anyone, particularly Veterans, journalists, and military historians.

‘The World’s Most Dangerous Paper Route’