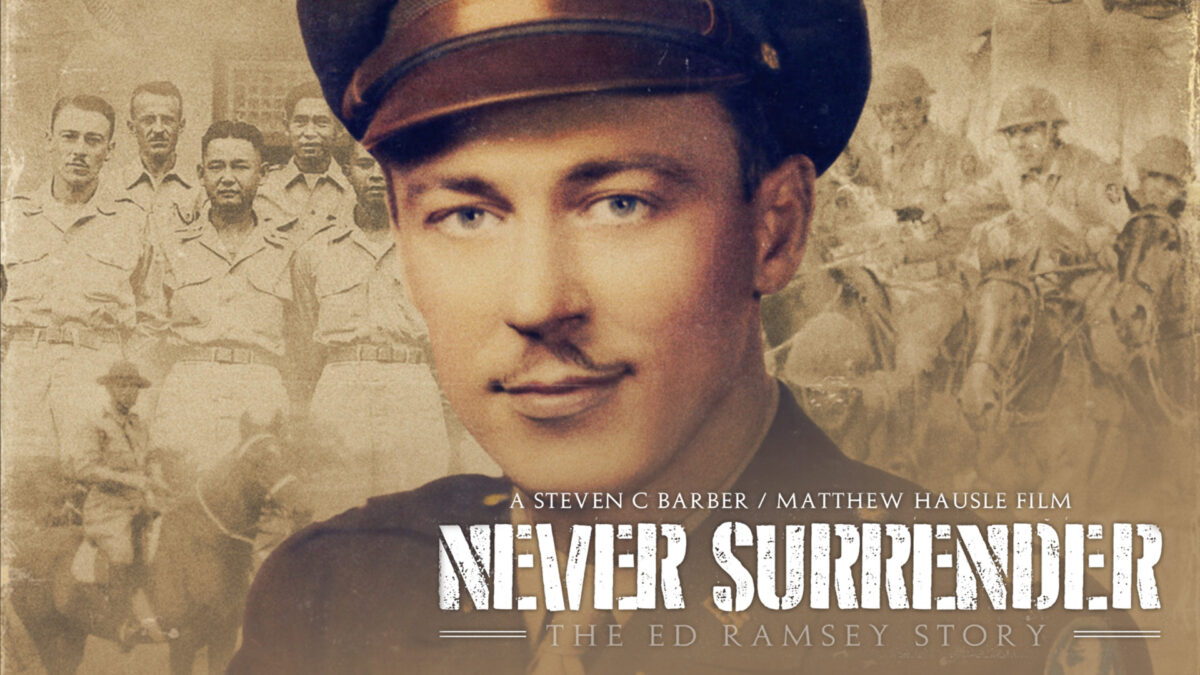 A heartfelt documentary about heroism, survival, and reconciliation.
BY Ian Kane TIMEJune 14, 2022 PRINT

Like many World War II biographical films, “Never Surrender: The Ed Ramsey Story” is an extraordinarily riveting production that covers uncommon valor in the face of danger and potential death. However, one of the elements that make this one even more unique is not only the incredible story of its subject, Ed Ramsey, but also its main location. Whereas many of the World II films I’ve seen take place in one European theater or another, this documentary is set in a lesser-known, oft-ignored locale—the Philippine Islands.

Set up in a typical biographical style and narrated by Josh Brolin, the bio showcases Ramsey’s childhood and moves forward from there. Ramsey was born in 1917 in Carlyle, Illinois. His father was a hard-working oil worker who followed the oilfield work wherever he could find it—which often meant constantly moving to different states. When Ramsey’s family moved to Wichita, Kansas in 1929, his father snapped mentally and committed suicide, changing his twelve-year-old son’s innocent demeanor.

By Ramsey’s mid-teens, the scandal of his father’s death caused Ramsey to develop into a rebellious “hell raiser.” He became involved with bootlegging during the Great Depression and was on the “fast track to nowhere.” His life changed dramatically when his mother enrolled him at the Oklahoma Military Academy. That led to him eventually signing up for Active Duty U.S. Army service upon graduating from the academy. And as a person who always loved horses, Ramsey had become a military cavalryman.

Ramsey wanted to be stationed at a particular unit in the Philippines, not only because it was warm all year round, but it also had a superb cavalry unit. He lived the life of a somewhat coddled cavalry officer, rubbing elbows with the rich and famous at swanky establishments and being invited to many of the area’s exclusive parties. However, everything changed when the Japanese attacked.

After their ambush of Pearl Harbor, the Japanese military forces quickly moved on to take the strategic Philippine Islands—all of them. Ramsey and other officers commanded over 40,000 Filipino guerrilla troops. But many of Ramsey’s fellow officers were either whittled down by the Japanese or ambushed and killed by Filipino communist sympathizers. Eventually, Ramsey was the sole officer in command of the resistance movement against the Japanese. Even though he suffered from a number of jungle-borne maladies, Ramsey bravely soldiered on, never surrendering.

Although I enjoyed this biographical documentary, I did find it rather fast-paced. Perhaps it was because there were so many people that were interviewed. Whatever the case, it could have easily been 20 or so minutes longer, and thereby, a little less exhausting.

What is great about it is the many pictures from both Ramsey’s younger years, as well as those from when he was stationed in the Philippines—both before the war broke out and after. However, it must be mentioned that some of the photos of the Japanese committing atrocities on captured Allied soldiers are pretty graphic, and therefore not suitable for younger eyes.

Whereas many films begin to fall apart during their third acts, this documentary finishes up strongly. Much of it focuses on Ramsey’s later years and the numerous challenges he faced after the war. Like much of the previous part of the film, Josh Brolin describes the various situations Ramsey found himself in, and Ramsey himself, along with many friends and family members also provide dialogue.

Other than moving a bit too quickly, “Never Surrender: The Ed Ramsey Story” is an extraordinary documentary about an extraordinary man, patriot, and war hero. Watch it for yourself and you’ll see what I mean.