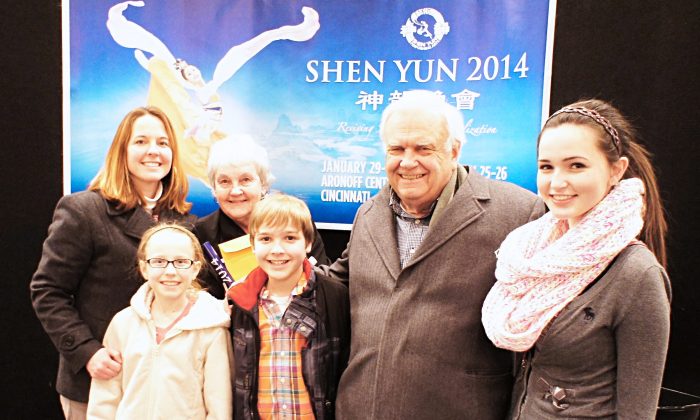 Julie Wentzel [L] with her parents and children at the Shen Yun Performing Arts performance in Cincinnati, on Jan. 30, 2014. (Bo Qin/Epoch Times)

CINCINNATI, Ohio—Julie Wentzel found the Shen Yun Performing Arts performance she saw with her family, on Thursday evening, to be beautiful.

“I liked the combination of the different arts being used: with the orchestra, the dancing, also the soloists, the pianist, and also the more classical dancing mixed in [with the folks dances],” said Ms. Wentzel.

Ms. Wentzel is the president of the local Cincinnati company Accent Signs. She came to see the show with her children and her parents.

Ms. Wentzel described the performance as “a good combination of different arts that tell a story, as well as help you learn about Chinese culture and history.”

New York-based Shen Yun aims to do just that. The company was founded in 2006 by a group of leading classical Chinese artists with a mission to revive China’s divinely inspired culture. At the heart of Shen Yun is classical Chinese dance, but the company also features ethnic and folks dances from china, as well as other aspects that make it unique, including an orchestra that combines Western and Eastern instruments, animated digital backdrops, award-winning vocalists, and colourful hand-made costumes.

Ms. Wentzel’s father, Earl Johnson, who used to be a comptroller at a bank before retirement, also praised Shen Yun.

“The dancing and the costumes, just the grace and beauty of the dancers. The grandchildren here at least [got] exposed to Chinese culture in some way.”

Shen Yun is known for its impeccable classical Chinese dance which, through its expressivity, is able to tell stories—simply through dance. Thus, Shen Yun dancers “tell” of ancient Chinese myths and legends, as well as some troubling aspects of Chinese society today.

The performance gave Ms. Wentzel insights into China’s current plight under the communist regime. “I knew that there was persecution of the Christians in China, but I didn’t know that there were others.”

Ms. Wentzel was reacting to the persecution of Falun Gong, whose adherents practice truthfulness, compassion and forbearance, and whose persecution is depicted onstage through dance.

After watching Shen Yun, audiences are invariably left with the sense of beauty and grace that permeates the show.

With reporting by Joan Wang and Sharon Kilarski