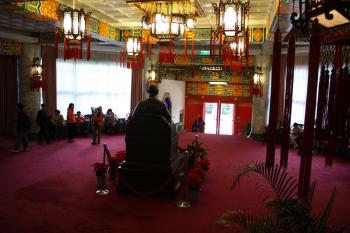 By Matthew Robertson
Print
TAIPEI—The first thing one notices when approaching the former Taiwanese seat of parliament, Chungshan Hall, is the smell of sulfur. The building and its surroundings were conceived 50 years ago with the utmost attention to Fengshui, the ancient Chinese tradition of geomancy. It required that the Hall be erected both in a mountain range, and near a naturally occurring sulfur pit. This is a rarity.

Chungshan Hall was Sun Yat Sen’s idea originally. A place was needed for the parliament of Taiwan to unite, hold meetings, discuss policy, and run the country. In 1956, after overcoming a great many troubles, architects and builders announced the 34 metre high, two-buildings-in-one, complete.

Chungshan Hall is made up of a separate front and back part. They have different foundations, and are essentially two different structures, but are connected to each other seamlessly from the inside. The original architect, Hsiu Tse-Lan, feared that the high clay content of the ground in the area, on top of a sulfur pit and a former volcano, was too unstable. By splitting the building in two, they hoped that if the back part collapsed into the abyss it would not take the front part with it. The presidential suite was located in the front.

The foundations of the building were also sunk seven metres underground to ensure stability.

Upon entering the building one is greeted with a plush lobby area. A giant Chiang Kai Shek sits on a chair, his gaze fixed on the entrance. Around him are ornate wooden lights with dangling red threads and intricately patterned rafters in multifarious colors, which suggests a very pronounced Chinese aesthetic. Visitors mill around and take photos, or sit down into the wide, wooden chairs.

To the right is the Eastern style greeting area, to the left the Western style. A tour will often take visitors through both—though the right, as expected, harbors greater mystery and hidden meaning. It is here that foreign dignitaries were invited for tea and discussions, back when Chungshan Hall was used for official business. Dozens of couches, chairs, sedans, stools, benches and tables are sprinkled around the room in stately patterns.

The inside of these rooms are embellished with palace lanterns, mother-of-pearl inlaid furniture, and color drawings on pillars—all are fine exemplars of elegance and delicacy, “highly acclaimed by artistic and intellectual circles,” according to the official brochure.

There is a clear central area with a beautiful Chinese painting on a board that extends across the back, behind the couches. Each large chair has a small tea-table beside it. There is a then a smaller tea table inside the largest, with a smaller one inside that one, and then a smaller inside again—four steps, in total, when unfolded entirely. The purpose was to save space, and allow for the compact arrangement of all items in a tea session.

These innocuous tables present a microcosm of the symbolism found throughout the whole building, where on them dwells a picture of a bat. Why the bat? Because the pronunciation for one of the two Chinese characters that make up bat, fu, is a homonym for one of the two characters that compose the word fortune. Chinese culture is riddled with plays on words like these.

Bat images aren’t the only symbolic elements at Chungshan Hall, though. Before even arriving at the building, one sees traces of this symbolic language. For example, every vertical railing on the bridge leading to the Hall has an engraving of the character for longevity, 壽, shou. Nearly every stair in the building is flanked by two imprints of this character as well, and it appears on the doors and other ornaments. The concept is important in Fengshui, and in traditional Chinese culture generally.

Going up one level and entering the second building, one finds the main dining hall. On the walls of either end sit two enormous gold-plated plum blossoms, which also carry symbolic meaning. The plum blossom, which comes to life in winter while other flowers wilt, are supposed to represent the resilience of the Chinese people through tough times. They span one metre, petal to petal.

On the same side of the building, one floor directly underneath, is the large parliamentary auditorium. Both it and the dining hall hold over 1000 seats. The parliamentary floor is shaped like a parabola, so even those at the back can see everything; the journalist area is at the back, with a now defunct postoffice, bank, and place to buy nibblies before sitting down and watching the show.

An enormous mural of Chiang Kai-Shek hangs in the middle of the stage, and where, as a tour guide will point out, the heart of the sulfur geyser lies inside the mountain. The mention of the geyser is often a launching point to give a more in depth explanation of the famous sulfur situation.

At the beginning of construction, the architect and his team had 19 tubes implanted in the ground, as a way of expelling the sulfur and stopping it from overwhelming the Hall. Staff now joke that while 19 tubes is fine, it still means that 81 percent of the sulfur manages to make it in.

This is quite fortuitous, they say, because sulfur is supposed to be good at killing germs, and ground staff of Chungshan Hall now all have longer life spans because of it—fitting for a building dedicated to the concept of longevity. Tour groups invariably laugh at the quip, though the guide adds that the veracity of the claim has not been scientifically verified.