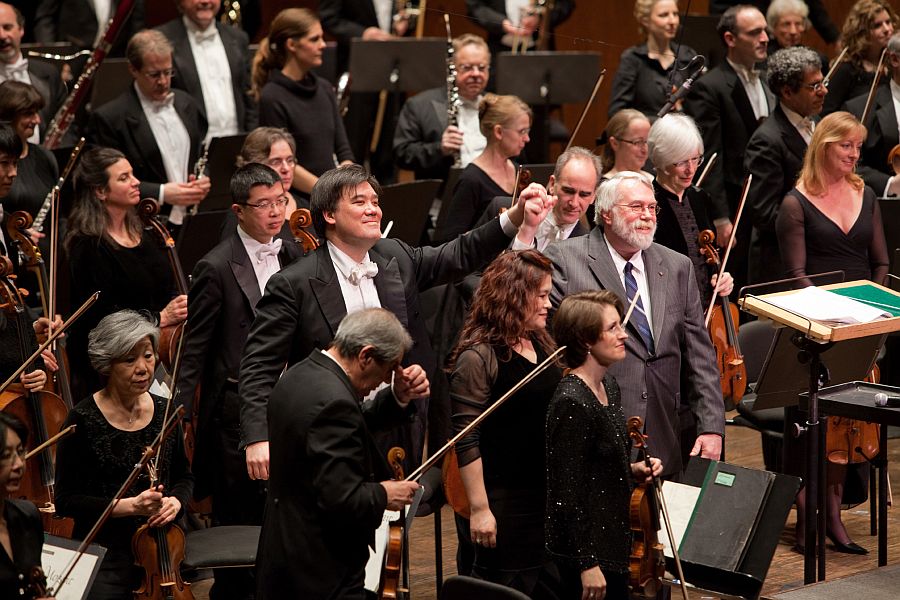 NEW YORK—The inaugural concert of this season’s Spring for Music Festival at Carnegie Hall started with the New York Philharmonic and added forces playing the local premiere of composer-in-residence Christopher Rouse’s Requiem. The massive piece, written about a dozen years ago, requires a symphony orchestra, baritone soloist, and two choirs. With the energetic Alan Gilbert conducting and the composer in attendance, the work was a resounding success.

Rouse has said that he was inspired by the Berlioz Requiem and wrote the work in part to mark the bicentennial of the French composer’s birth. Another influence is Benjamin Britten’s War Requiem, which mixes the Latin text with 20th century poems.

The score calls for a bass-baritone to sing the poetry and the choirs to sing the Latin words. At the concert the soloist was South African Jacques Imbrailo. To my ears, he doesn’t sound like a bass-baritone but a lyric baritone. With his pure voice and choirboy appearance, it’s understandable that he is a highly praised Billy Budd. His enunciation was clear and his singing emotionally powerful and able to be heard above the orchestra.

The work started with Imbrailo singing Heaney’s autobiographical poem, “Mid-Term Break,” in which a college student is sent back home upon his brother’s death. In a later section, he sings Ben Jonson’s poem about the death of his 7-year-old son, while the Michelangelo piece concerns the loss of a father, and the Milton, a wife.

The Heaney section was followed by “Requiem aeternam” (eternal rest) from the Westminster Symphonic Choir.

The third part, which starts with the gloomy “Dies irae,” about the Day of Wrath consuming the world in ashes, was a bit heavy on the percussion. The work calls for various types of drums, cymbals, gongs, maracas, and the like and sometimes they all seemed to be banged at once.

Siegfried Sassoon’s World War I poem describes a “simple soldier boy” who “put[s] a bullet through his brain.” The incorporation of the Sassoon poem is a link to the Britten War Requiem, which contains a poem by Wilfred Owen, a friend of Sassoon’s and a fellow soldier during World War I.

The work ends on a hopeful note. The Brooklyn Youth Chorus (placed in the balcony) entered with the hymn “Es ist ein Ros entsprungen” (A rose has sprung up from a tender root). Michelangelo’s proclamation, “I am not dead” sung by Imbrailo was followed by the choirs singing of the blooming of “a floweret in the middle of the cold winter.”

Rouse’s splendid work deserved the standing ovation at the end, proving that audiences are receptive to modern works that are this well crafted and performed.