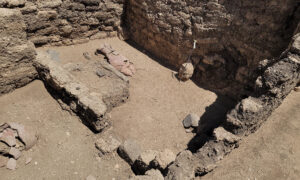 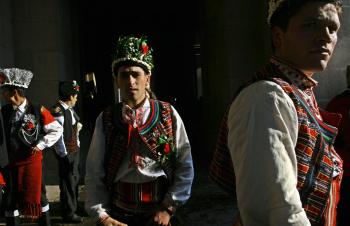 Bulgarian dancers from the town of Yambol wait before performing a pagan traditional dance named Koledari (Koleduvane), in central Sofia. Koledari is an important ancient pagan festival that coincides with the Winter Solstice in December and celebrates th (Valentina Petrova/AFP/Getty Images)
Life & Tradition

There is something special about Christmas in Bulgaria. When the last day of fasting ends, several groups of young men head east in the dead of night. These Koledari (meaning Christmas), wear special folk costumes and sing ethnic seasonal songs to every single house in town.

For 15 years, the town of Yambol, situated in the southern part of Bulgaria, which is in Eastern Europe, has hosted the National Koledari Feast on Christmas Day. For this year’s celebration, 37 Koledari groups will gather from various parts of the country for a contest in the town’s main square.

According to tradition, every family waits for them around the fireplace and then invites them to the festive table left untouched all night. The menu includes an uneven number of dishes (usually seven)—bread, wheat, dried fruits, and other dishes. On Christmas Day, a new life begins; and like the day that starts to grow, so the dishes, too, should contain ingredients that swell, like beans and rice.

The feast at Yambol is expected to be ever more splendid than last year’s. Dozens of children, youths, and the elderly will match their skills in four categories: ritual songs, blessing songs, winter dances, and children’s group performances.

The annual contest sponsored by Yambol Municipality aims to promote traditional Bulgarian folklore customs related to winter holidays and to demonstrate the wealth of national song and dance arts. Participants will be judged by a jury of the most reputable folklore experts in the country. The best groups will be awarded special trophies and recognition. This year the award fund has doubled.

Koledari songs are typical in Bulgarian folklore tradition, which mingles Christian rituals with pagan legends. The song texts cover topics like wishing one good health, long life, an abundant crop, luck, love, happiness, and joy. Some tell stories about age-old professions: about the farmer, the harvester, the shepherd, the mayor, the tailor.

There are many Koledari songs, but among the favorites are those about beautiful young maids who out-shine the sun, who out-sing the nightingale, and who long for their first love. A good part of Koledari songs is devoted to blessings.

Exactly at midnight, Koledari groups consisted of unmarried or recently married men start their ritual. They rehearse Christmas songs every day from Dec. 20, in order to be prepared for the visits during the holy night. That day is known as Ignazhden—the day that heralds the arrival of winter. According to an ancient belief, next year’s fortune will depend on who comes to your house first on that day.

Koledari have to visit all houses until dawn. They usually wear festive clothing, tall caps decorated with strung popcorn and flowers; some of them are dressed like animals and carry peculiar clubs in their hands. In some regions, one in the group pretends to be a cat and meows to announce their arrival.

When Koledari knock on the door, the host invites them to come to the table and gives them wine, food, or money. In return, they sing songs of blessings and praise every single member of the family—from the oldest to the youngest. They wish the hosts rich harvest, fortune, happiness, and luck.

In the past, people believed that Koledari songs had the power to drive away evil spirits. One of the main goals of this ancient ritual was to announce the birth of a new state in the universe, with new rules and a new order. That is why most Koledari songs symbolize one’s fate or promise a new beginning.

Surva, Surva,*
Merry year!
Big wheat spikes in the field,
Large grapes bunch in the vineyards,
Yellow maize in the bed,
Full house of silk,
Red apples in the garden,
Healthy till next year,
The whole year!

*A word usually used when Koledari recite their wishes to the hosts.