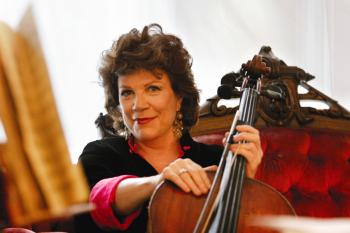 GODDESS OF THE CELLO: Christine Walevska and her beloved instrument. (Photo by Dayin Chen)
Arts & Culture

Christine Walevska ‘Goddess of the Cello’ in New York

BY Annie Wu TIMESeptember 14, 2010 PRINT
NEW YORK—Long after she drew the last bow and left the notes lingering in the air, the audience continued to applaud enthusiastically, signaling for her to play more. The “Goddess of the Cello” herself was here. Indeed, the slightly under-two-hours recital felt too short, leaving us yearning for more.

Listening to Christine Walevska play is truly a wondrous treat—her virtuosity is simply stunning. Born into a musical family, she began taking lessons from her father at the age of 8. At 13, she began studying with the great Gregor Piatigorsky and performed the Saint-Saëns Concerto with the National Symphony Orchestra. By the age of 18, Walevska began touring the globe, wowing critics and audiences alike.

The celebrated pianist Arthur Rubinstein said of Walevska’s playing, “Christine Walevska has the most sensuous tone I have ever heard on the cello … she is the only cellist who takes my breath away.”

At 20, she won a scholarship to study with Maurice Marechal at the Paris Conservatoire and became the first American to ever win the First Prize in cello and chamber music there. A year later, she made her first recording under the Philips label, performing the Schumann Concerto to critical acclaim. She also recorded the Dvorak Concerto, regarded by many, including Dvorak’s great-grandson Josef Suk, as the greatest interpretation ever heard of the concerto.

In conjunction with pianist Simon Mulligan, Walevska delivered an amazing recital, demonstrating the wide range of the cello through her playing. She seamlessly transitioned from the rich, deep low notes to the mournful high notes in every piece.

At times melancholy and serene (Bolognini’s “Cello Prayer”), and at times fierce and charged with emotion (Bolognini’s “Serenata del Eco,” Chopin’s “Sonata for Cello and Piano in G minor”), Walevska’s interpretations were impeccably meticulous and best of all, simply beautiful.

Of particular significance was the American premiere of Bragato’s “Milontan,” a piece that the Argentine cellist and composer wrote for and dedicated to Walevska.

Bragato, who was a close friend of Astor Piazzolla, also frequently performed in Piazzolla’s “Nuevo Tango” ensembles, performing cello solos for the first time in tango music. In addition, Bragato wrote many arrangements of Piazzolla’s tangos for various instruments and ensembles.

Walevska first met Bragato in 1967 when she held her first performances in Argentina at the Teatro Colón in Buenos Aires. There, Bragato was so impressed with Walevska’s playing, he said to her: “I will be your life-long friend and always at your disposal.”

In the program notes for the recital, Walevska wrote: “I was the first person to whom he gave all of his piano trio arrangements of the Piazzolla tangos.”

Bragato gave Walevska “Milontan” in 1983 for her to perform on her European tour just as she was preparing to leave for the tour from Argentina. Composed in one night, the title of the piece indicates milonga and tango.

Walevska also had a great friendship with Bolognini, whom she met when she was 9 years old. She recounts a story in the program notes about when her father was helping Piatigorsky translate a review of his concert. Piatigorsky was coined the “John Barrymore of the cello.”

Bolognini, who frequently vacationed with Walevska’s family and became a close family friend, taught her to play his works. Later, he wished for Walevska “to be the only one to play them beyond his lifetime,” she wrote in the program notes.

In celebration of Chopin’s 200th birthday, Walevska ended the recital with Chopin’s “Sonata for Cello and Piano in G minor” and “Introduction and Polonaise brillante,” two of the few pieces Chopin ever wrote for an instrument other than the piano. “Polonaise brillante” was written when Chopin was 19, and is bright and lyrical, befitting his young age at the time of composition.

The sonata was written for and dedicated to French cellist Auguste Franchomme. It was premiered by Chopin and Franchomme at the composer’s last public concert in February 1848.

For more information on the New York Chamber Music Festival, which runs from Sept. 10 to 16, please visit www.newyorkchambermusicfestival.org. Order tickets at www.symphonyspace.org.

Annie Wu
Annie Wu joined the full-time staff at the Epoch Times in July 2014. That year, she won a first-place award from the New York Press Association for best spot news coverage. She is a graduate of Barnard College and the Columbia University Graduate School of Journalism.
SHARE
Friends Read FreeCopyFacebookTweet
SHARE
Friends Read FreeCopyFacebookTweet
You May Also Like