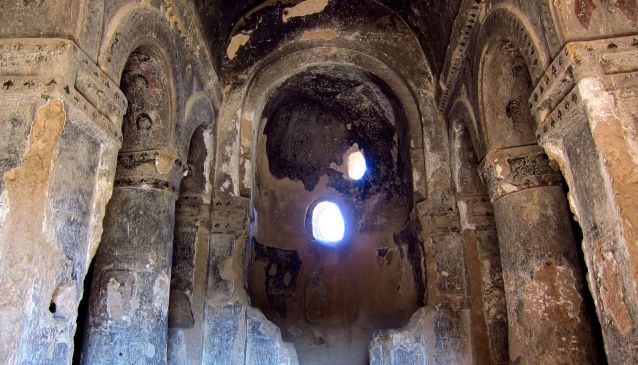 By Natalie Sayin, My Destination.com

Throughout the world, man has built majestic buildings emphasising their religion. Examples include Saint Peters Basilica in the Vatican City and the Masjid al-Haram mosque of Mecca. Turkey is a predominately-Muslim country but the Cappadocia region is abundant with Christian history and although the religious structures left behind are neither majestic nor grand, they are just as impressive.

Cappadocia was one of the first areas to embrace the new religion of Christianity, despite followers facing persecution for their beliefs. They met in secret and three of its citizens (The Cappadocian fathers) spread the word further throughout Asia and later became official saints.

The natural rock formation of the landscape of Cappadocia was soft yet sturdy, so citizens used them to carve houses, churches, and monasteries. Goreme open-air museum is one such example of simple, yet intriguing cave churches. Formed under the guidance of the Saint Basil the Great, in other places, believers built churches underground in case communities had to hide for months from invading forces. Derinkuyu Underground City is the most widely visited of them all.

The most widely visited of all monasteries in Cappadocia; this structure is not for anyone with walking difficulties or a fear of heights. Situated on the outskirts of Ihlara valley in Guzelyurt, the exterior appearance is bland and anyone could easily assume it was just another rock!

Inside though is a winding collection of narrow tunnels leading to large rooms intricately carved with columns. The frescoes have mostly been destroyed, damaged by soot from fires but the excavated architecture is outstanding, considering there was no modern machinery at the time of construction.

Monks inhabited it during the 13th century and historians have discovered kitchens, bedrooms, prayer rooms, and communal quarters. After the area was conquered and converted to Islam, the monastery fell into disrepair until it was restored in the last century to become a major attraction of Cappadocia.

Additional Info: Wear good walking shoes, pack a bottle of water, and avoid visiting in the mid-day heat. The panoramic view over the Cappadocia landscape from the top rooms is definitely a camera moment.

This long, deep, and extremely fertile gorge was a haven for Christians during times of persecution. Cave churches and monasteries carved into the side of the valley were out of view and the rock face made for easy painting of frescoes so illiterate believers could still learn about Christianity. Even today in some churches, the frescoes still display their vivid yellow, orange, and green colours. There are many to see but two of the best include…

Karanlik Kilise means dark church and it is a 11th century one-dome structure with Byzantine frescoes displaying themes from the New Testament, last supper, betrayal of Judas and the crucifying of Christ. Sadly, after Christianity declined, it became a pigeon shed but archaeologists spent many years scrapping off pigeon droppings and natural elements to reveal the original frescoes.

The Church Beneath the Tree sits at the bottom of the official touristic entrance into Ihlara Valley. After walking down 720 steps into the valley, its small entrance becomes visible. The largely intact 10th and 11th century Byzantine frescoes intricately detail Saint John, the Virgin Mary, Christ, and an angel. This church is not very large and depending on the size of your tour group, there may be a queue waiting.

Additional Info : While visiting these churches, it is worth employing a local guide with expert knowledge because signage often lacks in-depth information. Alternatively buy guidebooks that are widely sold throughout Cappadocia.

Copyright © 2014 by My Destination. This article was written by Natalie Sayin and originally published at My Destination Cappadocia