Choreographer: Shen Yun ‘Has Everything You Want’ 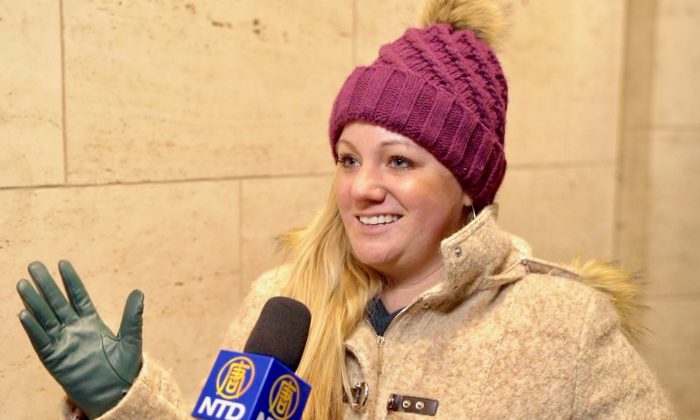 NEW YORK—Dancer and choreographer Kimberly Fitch had waited years to see Shen Yun Performing Arts, and when she finally did—”it was mind blowing.”

“I thought it was absolutely amazing,” Fitch said on Jan. 11 at Lincoln Center. “The staging was actually stunning.”

Fitch, whose long list of credits includes dancing on stage with Britney Spears on MTV, New York theater including “West Side Story,” training with Julie Andrews, and choreographing for ballet companies, is artistic director of her own dance company.

Coming out of the theater, she had immense praise for New York-based Shen Yun’s classical Chinese dance production, from the overall effect to the painstaking effort put into every detail of the choreography.

She said the staging was stunning, the dancers incredible, and the technique amazing.

“Whenever I perform or choreograph something, you want to make sure people know what you’re dancing about or know what you’re creating,” she said. She felt Shen Yun accomplished that in spades. Fitch said there were so many moments in the performance where, though seemingly subtle and lasting just a second, they did something deliberate and incredible.

She recalled a moment in a story-based dance where, upon the death of one character, another dancer performed a high leap.

“Usually when you do [that jump] it’s very joyful. But because of his acting it completely changed the dynamic of what that movement was, just because he was so passionate, as an actor,” she said. “That’s not an easy feat, to make a movement that’s typically joyous to have that kind of heartfelt [effect].”

“Those moments [on stage] are so specific, and you can tell they took the time to know what they’re dancing about. It’s not just facially, it’s with every part of the body,” Fitch said. “That definitely comes through, that they spent time learning about what they’re performing.”

What Shen Yun aims to convey is 5,000 years of China’s divinely inspired civilization. This rich culture flourished continuously for five millennia, and is unique in that the historic records that survive cover every dynasty and era.

To that end, Fitch added that Shen Yun was impressive because on top of fulfilling the audience as entertainment, it was also educational and shared with people a wonderful culture.

“They’re holding onto that part of culture that is often lost,” she said. “That’s a beautiful thing to have.”

Fitch said the performance really was an emotional journey.

“There’s so many beautiful moments and I think it really does touch on all the emotions,” she said. “It really does have, it has everything you want in a performance.”