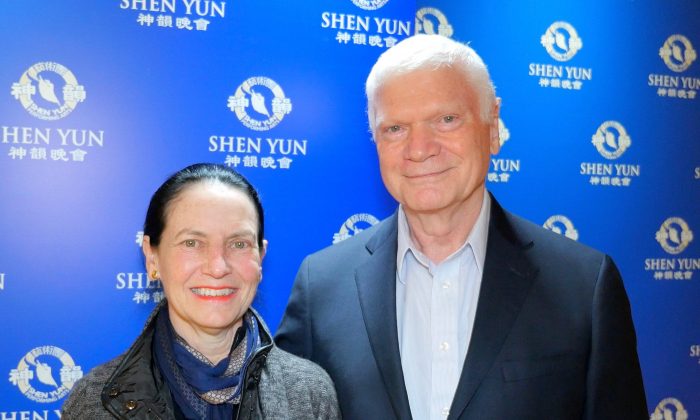 Margot and Bill Parsons enjoyed Shen Yun down to the little details. The couple from Boston caught a performance in New York at Lincoln Center on March 9, 2016. (Courtesy of NTD Television)

NEW YORK—Bill and Margot Parsons had seen Shen Yun Performing Arts advertised all over Boston, but had missed the chance to see it. On a Wednesday afternoon in New York City, the couple decided they would try Lincoln Center.

Just hours before the performance, the Parsons secured tickets for Shen Yun.

“Well it was an extravaganza. It was a spectacle. It’s full of wonderful energy,” said Mrs. Parsons, the choreographer and artistic director of DanceVisions, a non-profit dance company committed to producing original ballet-based choreography.

Yet she was blown away by the dancers of New York-based Shen Yun, perhaps in a way only one who had experienced a similar commitment could be.

“The dancers are clearly trained and committed, and it was lovely to see how classical work can come and be so accessible to an audience. It was not something that anybody in the audience would have to work at. It just comes at you and is just pure entertainment and is pure joy. But obviously from a very skilled level,” Mrs. Parsons said.

She keenly observed, and had much to share about the details.

“First off, the unison work is remarkable. They’ve been been drilled, clearly, heavily. The way the dances move in their flat footed way is unlike ballet but so elegant and so beautiful. I think the use of the technical work—the leaps, the jumps, the acrobatic work was well integrated into the more subtle and beautiful use of costumes and movement,” she said.

Shen Yun performs classical Chinese dance. As the emcees explained, it is a comprehensive dance system of thousands of years that is still little known in the West. It had developed through the dynasties, becoming an independent form of dance with unique postures and movements, plus the difficult aerial techniques Mrs. Parsons noticed—techniques that are actually the predecessors of modern sports like gymnastics and acrobatics.

It’s amazing how each dance has it’s own character and is different and is intriguing.
— Margot Parsons

Those unique movements, new to her, were lovely. “It’s amazing how each dance has it’s own character and is different and is intriguing,” Mrs. Parsons said. She enjoyed the build of the program, which included about 20 pieces, structured in a way that held the audience members’ interest throughout, she explained. “The repertoire was well presented.”

Mr. Parsons, artistic in his own right as a photographer, zeroed in on the details as well.

The female dancers take quick half-steps that make them appear to float. The hand postures and movements are exact down to the very placement of the fingers.

“I like the precision, the energy, and the absolute clarity of all the lines. It’s very beautifully done,” he said. He was watching the footwork of the dancers, and thought it always surprising.

“It’s very precise, it’s very intricate, and it’s full of surprises. I like that,” he said. “Little changes in the feet.”

“That was the most interesting to me, the small details.”