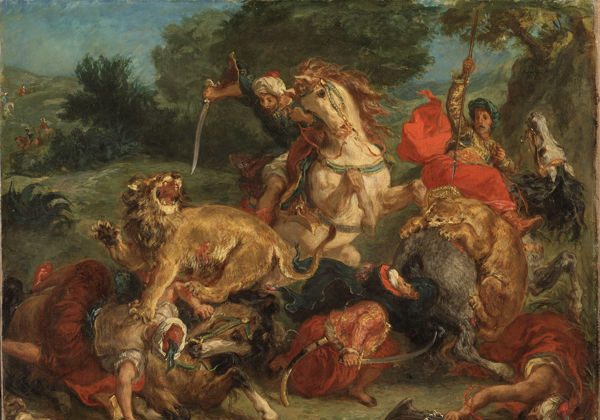 Chopin and Delacroix: How Romanticism Grapples With Past and Present

Nestled between the 18th-century Age of Reason and 19th-century realism, Romanticism was a movement that gripped the most passionate of artists and intellectuals in our Western canon, giving us lasting works that glorified the past, nature, and the depths of human emotion and creativity.

Romanticism, at its purest, seeks the unattainable ideal.

Artist Eugène Delacroix, whose work is currently featured at The Metropolitan Museum of Art, was a leader in the French Romantic school. On Nov. 18, visitors are invited to explore his work in depth with the addition of Frédéric Chopin’s music and a lecture presented by conductor Leon Botstein and The Orchestra Now, in the museum’s ongoing “Sight and Sound” series.

Delacroix and Chopin, as well as many other Romantic artists and wordsmiths like composer Hector Berlioz and poet Charles Baudelaire, were contemporaries during a tumultuous era. Delacroix (1798–1863) was born less than a decade after the French Revolution, saw the founding of the Second French Empire under Napoleon III, and died just before the Paris Commune and the permanent end of the French monarchy.

Delacroix, an unconventional spirit, was not interested in painting contemporary subjects or in impressionism, as other famous artists like Courbet and Manet were known for around his time. Instead, he copied the old masters, like Rubens, in order to learn to paint, and focused on historical subjects and works—Apollo, Christ, and even scenes from Shakespeare.

Yet his bold use of color and brushwork broke form.

“It’s a question … of how to respond to the heritage of formal conventions that have been inherited from classicism, and how a picture is made, whether adhering to classical expectations still gives the modern artist an opportunity to express their distinctive originality,” Leon Botstein said by phone. He will be conducting the program at the Met Museum.

In 1831, Chopin arrived in Paris. He rented a furnished room in a walkup in the city center. From his window, he could see from Montmartre to the Panthéon.

“Many will be jealous of my view, but no one of my stairs,” he later wrote in a letter.

It was in this city that Chopin would spend roughly half his life.

Chopin, indisputably a Romantic, was a composer who held on to the past, drawing influence from classical giants like Haydn, Mozart, and Bach, rather than his contemporaries Berlioz, Liszt, and Schumann.

But the pianist, who disliked giving large concerts, often met with and performed with his contemporaries in salons and in his Paris apartment.

He and Delacroix were both artists that have now been defined as figures who took the legacy of tradition to create something entirely meaningful for their present time.

“During the day [Chopin] told me about Music, ” Delacroix wrote one April near the end of Chopin’s life. Chopin then explained harmony and counterpoint. The complexity of logic and order in music, such as a fugue, shocked Delacroix, leading him to write that this was a science as well as an art.

“It’s the Reason itself adorned by the Genius, but that follows a necessary journey, governed by higher laws,” Delacroix wrote.

While Delacroix took an interest in Chopin’s work, writing about their conversations in his journals, Chopin didn’t quite understand Delacroix’s work.

So the question this music program explores, Botstein said, is whether there was a connection between what Delacroix was doing as a painter, and what the composer Chopin as well as Berlioz, who was close to Delacroix but not to Chopin, were doing in Paris in the mid 1800s.

The ideas these Romantic works convey, Botstein said, have a lot to do with the idea of the work and its relationship with the viewer or listener.

Romantic literature, for example, embodies such feeling that the author and protagonist merge in the reader’s mind. How might that idea translate in painting, or music? And how do the artists render the world in the first place, so that their own creativity becomes inseparable from what they seek to portray?

More than just portraying the external world, or even how an artist feels about it, it’s about getting “under the skin of external reality,” Botstein said.

For Botstein, a highlight of this period of art and music history is the incredible passion—which we might take inspiration from.

“The making of art was indispensably essential to their life. It was related to their politics, to their person, and they believed it was a powerful medium, whether painting or music, in the world they lived. Something we don’t believe today,” Botstein said.