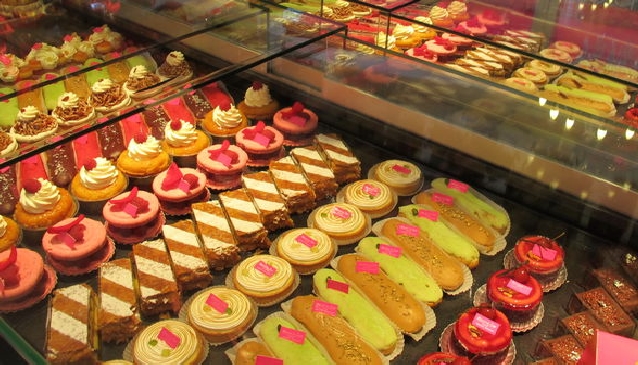 Chocolate – Stealing the Show in Bordeaux

It is virtually impossible for me to pass by the window of a patisserie. Patisseries or pastry/sweet shops dot the landscape of Bordeaux restaurants and indeed these tempting destinations are also to be found in small villages such as Saint Emilion. I’m drawn to the displays of buttery sweet and sometimes colourful little art pieces that are so delicately and cleverly constructed. It’s as though they’ve been created with the flair of an avant-garde architect and arranged in the windows by a professional stylist. On the other hand, maybe it’s the chocolate that draws me to the glass, or the macaroons.

The real significance of chocolate to the French palate was beginning to dawn on me recently. It was the invitation to the Salon du Chocolat exhibition in Bordeaux in early March that triggered my epiphany. The history of chocolate in France is long and rich – yet another treasure that the French are keeping secret? I’m sorry Belgium and perhaps Norway, but my loyalties have crossed the floor.

The cocoa pods containing the beans at the Salon du Chocolat looked to me like mini watermelons and a bit cucumber shaped. As one chocolate historian related to me, cocoa trees producing these pods were first cultivated by the Mayans and then by the Aztecs. The former group considered the beans sacred and expensive and used them as a source of payment as well as a fortifying drink – not too much has changed. It still takes ten years before a first harvest yields a decent crop.

In 1502 Columbus landed on the island of Guanaja, making him the first lucky European to taste chocolate. But it was Hernan Cortés who brought chocolate back with him to Spain. During the 17th century chocolate captured the palates and hearts of France. The first chocolate factory opened in Bayonne in 1776, a few hours south of Bordeaux near Biarritz. Still celebrating the early beginnings of chocolate in France are the Planète Musée du Chocolate in Biarritz and a chocolate museum and factory, La Puyodebat, in Cambo-les Bains about 25 minutes north of Biarritz.

During the 19th century the popularity of chocolate really took off, a fact proven by such notables like Meunier in France, Suchard, Nestlé and Lindt in Switzerland, Fry, Roundtree and Cadbury in England and Van Houten in the Netherlands. Though Rotterdam became the trade centre for the beans, it was Bordeaux where the experts were creating and developing the best chocolate treats – they still are. A fine and popular example of an early 19th century chocolatiers, still going strong, is Cadiot-Badie on the Alleé de Tourny. But there are exciting new kids on the block too!

Copyright © 2014 by My Destination. This article was written by Ruth Boughner and originally published at My Destination Bordeaux