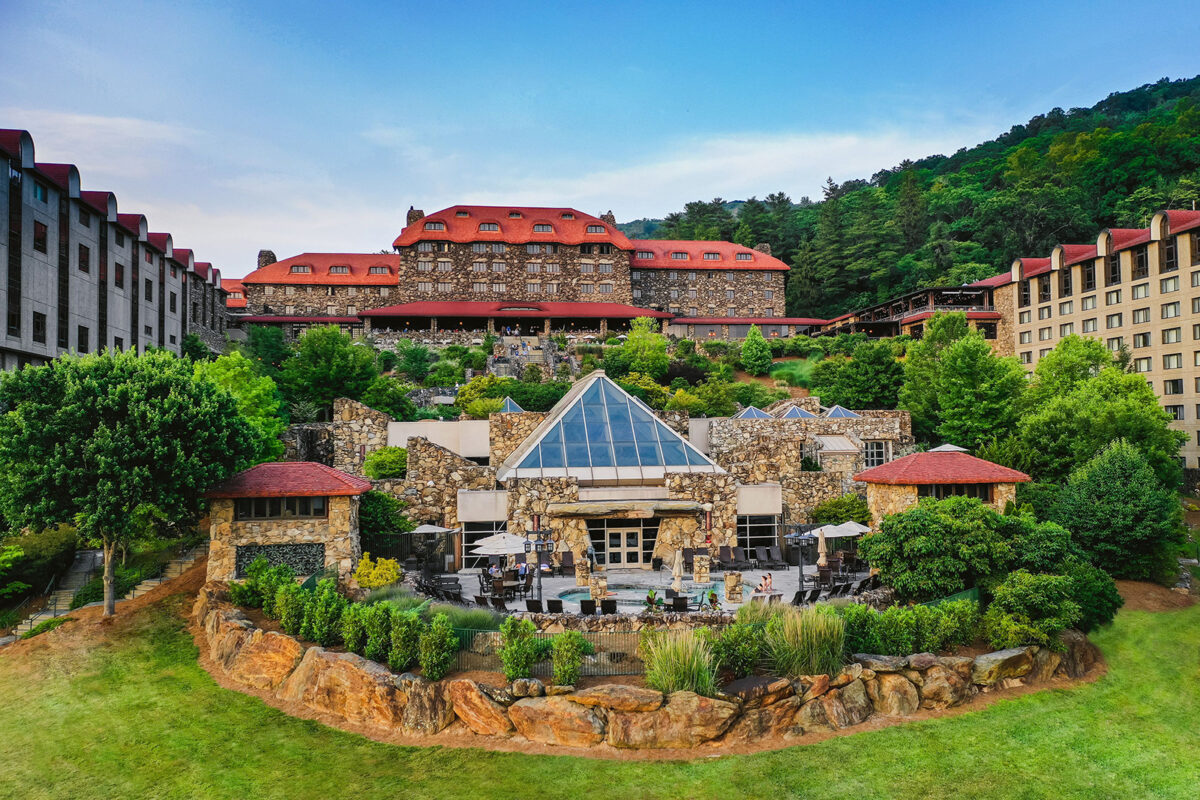 The Omni Grove Park Inn opened in 1913 and has transformed since then into one of the most historic and grand hotels in the South. Its subterranean spa is one of the best in the U.S., its golf course links sought after for play and its views of the Blue Ridge unparalleled. (Omni Grove Park Inn/TNS)
Travel

Asheville—With summer just getting started and heat and humidity practically smothering most of the country like a fat wool blanket, now is the time to plan a romantic getaway to higher, cooler elevations. The historic, stunningly serene Omni Grove Park Inn, in the heart of western North Carolina’s Blue Ridge Mountains, has been welcoming guests to the clean, pristine air of its slope-side retreat for more than a century.

The iconic Grove Park has long been a symbol of the Blue Ridge, probably as well-known as other local landmarks of the Biltmore House, Chimney Rock and the Blue Ridge Parkway. The hotel, literally chiseled into the granite wall of Sunset Mountain, opened in 1913 after Edwin Wiley Grove and Fred Seely, both in the pharmaceutical industry, and their crews quarried the rock from the mountain’s massive boulders. Using only one steam shovel, it took roughly 400 men and a team of mules and wagons less than a year to hew the boulders from the rocky terrain and build the inn. It is, to state it plainly, a remarkable feat that resulted in an architectural wonder.

From the outside, the main lodge looks similar to a rustic, oversized gingerbread house capped with red frosting. Then you step into the Great Hall, noted not only for its impressive stone walls, rich woods and hand-stenciled ceilings, but also for its two massive fireplaces, one at each end of the cavernous room. At 8 feet high and 14 feet wide, a grown man or woman can stand inside one — if the fire isn’t blazing, of course — and still have room to spare. Like the inn itself, they are carved from granite, and they’re so immense that it seems mere logs aren’t burned in them but entire lengths of trees. Watching the fireplaces has all but been named an official pastime in Asheville, so popular is it that the Grove Park added rocking chairs for guests to while away the hours with a good book while snuggling to the warmth of the toasty, crackling fire.

Since it opened in 1913, the Grove Park, at its heart the consummate romantic champagne-and-chocolate-covered strawberries resort, has metamorphosed into something of a Southern legend. Guests from around the South are drawn to it likes bees to nectar. Set amid cascading gardens of stone, the rambling old inn is known not only for its walls of mountain rock but also for scenic beauty. The forces of nature are at work here with mountain views, vibrant flower-filled pathways (think: hydrangeas, roses and magnolias) and brilliantly sparkling sunsets fluttering in jeweled tones of amber, ruby and amethyst against the crest of the Blue Ridge.

The Grove Park certainly inspires the soul, as its mountain atmosphere is reminiscent of the grand resort era of the early 1900s, sort of the Adirondacks, Southern-style. It has drawn simple folk like me as well as celebrities, writers, artists and politicians to its fresh mountain air. F. Scott Fitzgerald spent two summers at the inn, and later other literary scribes visited, including Thomas Wolfe and Pat Conroy. If you like sleeping where the famous have slept, you’ll love it here. Dan Akyroyd, Burt Reynolds and Beau Bridges have been guests, as have George and Barbara Bush and the Clintons, Obamas and Eisenhowers. Tom Landry, George Gershwin, Will Rogers, Alex Haley, Mikhail Baryshnikov have been here, and, well, the list goes on and on.

When it comes to good eats, the inn is known for its innovative culinary bistros and restaurants. At the Sunset Terrace, it’s as much about the sunset views as it is the cuisine, including Miyazaki beef, known for its signature marbling, but hubs and I settled on seafood, mine the absolutely decadent pistachio-crusted and bacon-wrapped scallops and his the shrimp scampi, one of his all-time favorite meals, where here, he declared it “divine.” You have a choice of several other restaurants and bars, too, including Blue Ridge, Vue 1913, the Great Hall Bar and Elaine’s Dueling Piano Bar.

The Grove Park’s spa is among the most unusual in the U.S., if not the world. The spa is truly a sanctuary in every sense of the word, as it is hidden almost entirely underground and complemented by indoor waterfalls, the most melodious of music and the sweet, almost fizzy aroma of rose petals and lavender. The subterranean design was purposeful, as it gives you a complete sense of isolation where you’re cocooned in quietness and serenity, away from the world and all its troubles.

While the massages, with apropos names like the Blue Ridge Symphony, Grove Stone and Mountain View, are among the most popular treatments, I am, let’s just say, of a certain age and chose the reversive facial that promised to turn back the hands of time by smoothing fine lines and wrinkles. During the treatment, I was so relaxed I was soon adrift in a peaceful, blissful sea of semi-consciousness. Afterward, my skin was soft and glowed like a Blue Ridge sunset.

The inn includes tennis courts and its own 18-hole, par 70 golf course whose links have been played by golfing greats Bobby Jones and Jack Nicklaus. But if tennis, golf and spa don’t tickle your fancy, Asheville, five minutes away, is strongly rooted in the arts and history. Visit wonderful places such as the French chateaux-styled Biltmore estate, the Thomas Wolfe Memorial, the River Arts District, the Botanical Gardens at Asheville or the North Carolina Arboretum. Just a 35-mile drive away, Great Smoky Mountains National Park awaits in all its picturesque glory.

But then again, doing nothing except absorbing the beauty of the Grove Park is absolutely endorsed.

At the end of the day, it’s almost a requirement to pull up a deck chair on the tiered spa terrace or a rocking chair on the veranda of the Great Hall and watch the sun slide beneath the mountains. Just at dusk, the alchemy of the setting sun transforms the Blue Ridge into something spectacular, and the mountains, all golden and lazy, collide with the sky in dramatic, captivating fashion, and suddenly home, wherever it may be, is far, far away

For more information, visit https://www.omnihotels.com/hotels/asheville-grove-park, call reservations at 1-800-438-5800 or call the concierge at 1-828-252-2711. Current rates are from $349 per night. The resort is pet-friendly. Self-parking is $20 per night, while valet parking is $30 per night. More information on Asheville is found at www.exploreasheville.com. Asheville Regional Airport, about 17 miles from Omni Grove Park Inn, is served by Allegiant, American, Delta, JetBlue, Sun Country and United.