On Monday, the restaurant chain Chipotle stopped serving food with genetically modified ingredients, becoming the first major American chain to do so.

In 2014, 93 percent of all corn and 94 percent of all soy grown in the United States was genetically modified, according to data collected by the USDA (Department of Agriculture).

Now, the chain has opted to use non-GMO (genetically modified organism) corn, and replace soy oil with rice bran oil and sunflower oil. Its flour tortillas are fried with non-GMO canola oil, according to information on Chipotle’s website.

In 2013, the company was the first national chain to disclose which of its ingredients were genetically modified. On its website, the company explains that it is now committing to 100 percent non-GMO ingredients because studies have shown that the growth of GMO crops harms insect populations and leads to the proliferation of herbicide-resistant weeds.

As for whether genetically modified food is safe for human consumption, the company said that because scientists are still researching whether GMOs have long-term effects on humans, it wishes to “take a cautious approach toward GMOs” until more studies are conducted.

The company’s focus on natural food is making gains with consumers. In the first quarter of 2015, Chipotle made $1.09 billion in revenue, an over 20 percent increase from the same period last year. By comparison, the country’s biggest fast food chain, McDonald’s, saw a 2.6 percent decrease in U.S. sales, resulting in its operating income falling by 11 percent in 2015’s first quarter.

Since 2012, the number of annual customers visiting McDonald’s has been falling, while customers at Chipotle have been increasing steadily since 2010, according to Trefis, a financial data analytics firm.

“Fast casual” restaurants like Chipotle, which emphasize high-quality food that can be served up quickly, are also gaining more market share in the restaurant industry. In 2013, sales in U.S. fast casual chains grew by 11 percent, while fast-casual total store count went up by 8 percent, according to Technomic, a food industry research firm.

Chipotle said it doesn’t expect many cost increases as a result of the changes in ingredients, though it noted that finding enough non-GMO supplies took “substantial effort.”

Earlier this month, some Chipotle locations had to stop serving carnitas, or shredded pork shoulder meat, due to a supply shortage. A major pork supplier was found to be in violation of Chipotle’s standards for responsible animal raising, which require suppliers to give pigs access to the outdoors, deep-bedding pens with plenty of straw, as well as an antibiotic-free, vegetarian feed.

While Chipotle isn’t using GMO soy and corn, it will for the time being still use animal products—meat and dairy—that come from animals raised on GMO feed. The company said it is still trying to find non-GMO sources, but that it could present a challenge since most animals are fed with GMO crops. The exception is Chipotle’s beef, some of which is grass-fed.

CORRECTION: A previous version of the story said Chipotle’s beef was 100-percent grass-fed. Grass-fed beef is offered at some of Chipotle’s restaurants, but not all. Epoch Times regrets the error. 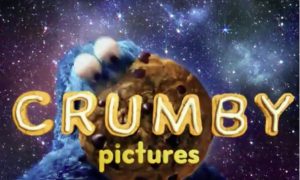 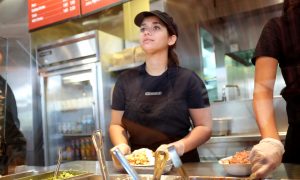 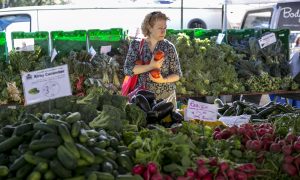 FoodBy Annie Wu
US Organic Food Industry Is Celebrating Success, but Is That What the Numbers Say?
04-27-2015
sharecomments 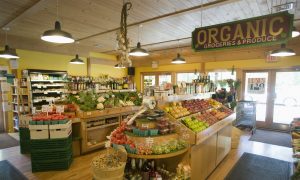