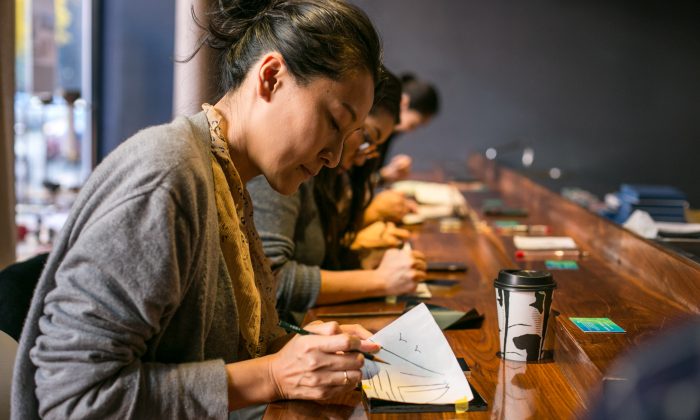 A woman uses a pattern to create lacquerware at a workshop class at the Japanese restaurant Kosaka in New York on Nov. 13, 2016. (Benjamin Chasteen/Epoch Times)
Arts & Culture

NEW YORK—Lacquerware—wooden objects that are hand-painted, carved, and embellished with high attention to detail—has a long history, dating back to objects found in China in the Neolithic period. Over the centuries, artisans have developed intricate techniques for the purpose of creating beautiful works.

One of these techniques is chinkin, a method for creating gold-inlaid lacquerware.

Indentations are carved into the lacquered object to create a design. Then raw lacquer is applied as an adhesive, and gold or silver powder is sprinkled over the surface to create a gold- or silver-inlaid effect.

It is a technique that has its origins in China, but it was perfected and elevated in Japan during the 16th century. Today, it is a dying art.

Yoshinori Shibayama, a gold-inlaid lacquerware artist, says this tradition is passed on from teacher to apprentice, generation to generation.

“The most important thing for me is to teach  it to the next generation, so as to not stop this technique,” Shibayama said. “There are fewer and fewer [artisans of this craft].”

In addition to teaching and creating lacquer art in Ishikawa Prefecture in Japan, Shibayama has held workshops at the Victoria & Albert Museum in London and for the Imperial Family of Japan.

Shibayama was interested in painting as a child, and by chance took a chinkin workshop. The act of creating such a design from carving was very interesting to him, Shibayama said, so he stuck with it.

He looks to his surroundings and nature to find images that can become beautiful designs. Then he carves them to suit the lacquered object’s shape. Maybe it’s a squirrel curled on a round lid, or leaves folding around the corners of a box.

“The most important thing for me is actually to think nothing,” he said. “Otherwise the lines might come out weird.”

On Nov. 13, Shibayama hosted two workshops at Kosaka, a local Japanese restaurant, explaining the details of the craft and helping attendees create their own designs on lacquer panels.

“When I was around 15, I participated in a workshop like this,” he said.