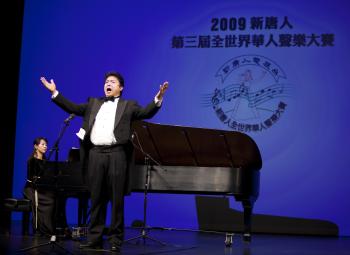 NEW YORK—Vocal professionals and students from all over the globe gathered at the Gerald W. Lynch Theater at John Jay College in New York for the third annual NTDTV Chinese International Vocal Competition.

This bel canto competition is part of a series of nine held by international satellite television station New Tang Dynasty TV, whose mission is to promote traditional culture through the arts. The vocal competition aims to “foster cultural exchange and promote traditional vocal arts of pure authenticity, pure goodness, and pure beauty,” according to its charter. The competition is the first one ever that is open only to Chinese and Chinese descendants.

Over 100 vocalists applied from more than 10 countries, including the United States, France, Italy, Australia, Japan, China and Taiwan. Forty-four of them were invited to New York as preliminary contestants.

“The competition is meant to introduce the Chinese language to the vocal community,” said judge Yang Jiansheng, a critically acclaimed alto who began her career with China’s Central Philharmonic Orchestra and later studied with Italian operatic masters.

“It's very difficult to sing Chinese songs in a Western style. It takes great skill on the vocalist's part and they need to enunciate. But because not many contestants choose to sing in Chinese today, it's hard to tell how good they truly are,” she said.

All contestants will be required to sing two songs each of their own choosing—at least one of which must be in Chinese.

Speaking of the semi-final round on Saturday, Yang said, “Tomorrow will be a better measure of their skills.”

Contestants will be judged on the range of their voice, their use of volume and projection, how well they control their voices, and fluency in the languages they sing in, according to Yang.

Contestants may choose to sing Chinese traditional, folk, and classic songs, television and movie theme songs and arias—but all pieces must be performed in the bel canto style, which originated in 18th and early 19th century Italy and is recognized for its flexibility in the use of vocal range.

In its three years of existence, the Chinese International Vocal Competition has served as a unique platform for Chinese artists to share their skills.

“This competition is for Chinese people all over the world and I think that’s what attracted me,” said tenor Alvin Tan from San Francisco, California—now a semi-finalist—who has a degree from the San Francisco Conservatory of Music.

“I think a true artist serves the music and not him or herself,” Tan said.

Another semi-finalist, mezzo-soprano Lee Yu, is participating in the competition for the third year. For her, it's about personal growth.

“Arts are related to a person’s personal experience,” she said. “For me, technical improvement has a limit, yet inspiration is unlimited. One might sing the same song differently at different ages, because he or she would have a different understanding of the song.”

Semi-finalists will move into the next round of intense competition on Saturday 10 a.m. at the Gerald W. Lynch Theater.

For tickets and other information, please see vocal.ntdtv.com/en