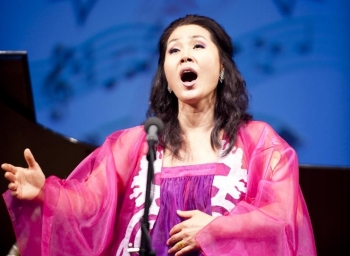 NEW YORK—A group of 32 elite Chinese bel canto vocalists from around the globe sang in the semi-final round of the 2009 NTDTV Chinese International Vocal Competition at the John Jay College on Saturday, August 1.

By the end of the day, half of the contestants—10 semi-finalists from Asia and 22 from Friday’s preliminary in New York—were eliminated. Most contestants chose one song in Italian, German, Latin or French and the other in Chinese. They were diverse in style and topic.

For the semifinal and final rounds, contestants are required to perform two songs, each of their own selection. At least one of the songs must be sung in Chinese, and finalists must not repeat any song from a previous round.

Bel canto is an operatic singing style distinguished by full, even tones, and a brilliant display of vocal technique. Because of the need for enunciation, using the bel canto style presented a challenge for many contestants.

Soprano Min Kai Yi from Taiwan is now studying choir conducting and vocal studies at Maastricht University in Holland. “It’s very different to sing bel canto in Western languages than in Chinese. Actually, my Chinese articulation improved dramatically while preparing for this competition,” she said, adding that she appreciates an emphasis on delivering the lyrics clearly.

“Nowadays, many people emphasize more on quantity and speed rather than quality. Yet if this trend goes on, many valuable things, such as culture, will be gradually lost. And that will be a pity. So I think the nine series of competitions is very valuable, because these will retrieve the nearly lost culture.”

Lee Wen, Min’s cousin and a hospital credentialist in the United States, said that the caliber of the competition was “so much higher” than she imagined.

“I didn’t expect so many contestants to be both young and talented. I am a bit overwhelmed by the standard of Chinese vocalists nowadays,” she said, noting that traditional singing is worthy to be preserved as it brings people to a “calmer realm.”

In preparation for the final stage of the competition judges further explained their expectations: “We must look at performance at the final round as well as that in the previous two rounds,” said Guan Guimin, a world renowned tenor. “And we need to look at their understanding of the songs, and their outlook on life. You can tell it in their eyes. Their character comes out in their stage presence.”

“You must have a good handle on pronouncing the words,” said music educator and vocalist Han Suqiu, who serves on the panel of judges. “Because the Chinese language has a very deep meaning. If you cannot enunciate, then you cannot convey the inner meaning of the lyrics.”

Judges are keeping an eye on the authenticity of the singing style, too—points are taken off if an ethnic style is used instead of bel canto. “There are 56 ethnicities in China, and each has its own systematic and characteristic singing styles that cannot be combined,” said Han.

Soprano Chou Hsiao-Chien from Minneapolis, Minnesota thinks the contest provides a good platform for this kind of exchange. “I think bel canto is quite important for its wide acceptance in the Western world.” she said. “It’s harder for Westerners to understand Chinese ethnic songs. Bel canto kind of decreases the cultural gap.”

Wu Min, former music professor in mainland China, was among the audience of the competition.

“Majority of the contestants were absolutely amazing. Their voice quality was great while their fundamental skills were also solid,” he said.

“What was most precious was that their inner self and outer appearance were consistent. None of them tried to show themselves off. I think in this competition, they are carefully trying to convey beautiful and good things to the audience—that’s their wish.”

Finalists will move into the next round of intense competition on Sunday 10 a.m. at the Gerald W. Lynch Theater. Award Ceremony will be held at the end of Shen Yun Performing Arts performance at the SUNY Performing Arts Center in Purchase College, Westchester, New York.

For tickets and other information, please see vocal.ntdtv.com/en and shenyunperformingarts.org