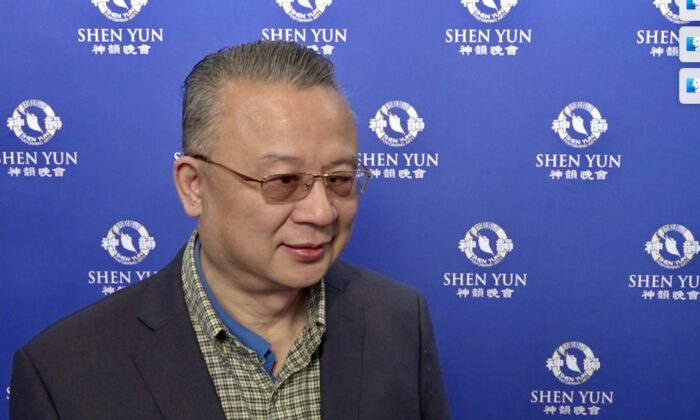 Violinist Guangxun Hua is a longtime fan of Shen Yun Performing Arts and enjoyed his fifth performance at the Jones Hall for the Performing Arts in Houston, on Dec. 31, 2019. (NTD Television)

HOUSTON—Violinist Guangxun Hua is a fan of Shen Yun Performing Arts—he has seen the classical Chinese dance company in performance five times and plans to see it again and again. Hua says the renowned performing arts company’s secret to success is tradition: by honoring their roots, these artists have created music and dances that can be enjoyed indefinitely.

“From the dancing to the music to the set design, it is spectacular. The performers were so precise, and their talent is of such high level. And most intriguing perhaps is that the performance seeks to bring out the ancient culture that spans so many millennia,” said Hua at the Jones Hall for the Performing Arts in Houston where he celebrated New Year’s Eve with another performance.

New York-based Shen Yun was formed in 2006 by artists who wanted to share the authentic traditional Chinese culture with the world. A dozen years later, it has burgeoned into a world-renowned group with seven equal-sized companies that this season will bring performances of China’s 5,000 years to people in 750 performances.

“Many shows modernize at the expense of throwing out tradition, but what Shen Yun does is preserve the treasures of tradition and bring it to our time, and bring it to the next level,” Hua said. “It gives the audience something so enjoyable that every time you see it you want to see more of it. It is because Shen Yun seeks to bring out the beauty of tradition, a culture 5,000 years deep. This is what I think.”

Hua commented that the audience that afternoon was indeed warm and lively, as the performers had made a connection with them. There was something magnetic about what was happening on stage, and the audience responded.

“Every time I come, there’s something fresh about the performance, without straying from tradition of the 5,000 years of Chinese culture,” Hua said. It’s a rich heritage from which there is much to draw on, he added.

“This is the beauty and the arts of 5,000 years, there is something very deep about this culture that makes it so you can never tire of it,” he said.

Shen Yun’s music is famous for its blend of East and West, with ancient Chinese instruments like the pipa and erhu used amid a classically Western orchestra.

Hua, who was the chief violinist of the Zhejiang Provincial Symphony Orchestra in China before opening his own violin school, had high praise for this blending arrangement. He noted how deftly Shen Yun music used the compositions and arrangements to tell stories and create an understanding of, for many, an entirely foreign culture.

“One of the most unique things about this performance is that all of the music is originally composed. The sound is truly beautiful and also expresses the traditional Chinese culture,” Hua said.

“Of course, it’s more difficult like this because Chinese instruments have very different sounds. Western instruments are more familiar and they blend together easily. If you want to blend in an instrument like the pipa or erhu, it’s a tremendous feat they’ve accomplished,” Hua said.

Hua says it’s thanks to this that Shen Yun’s music can communicate and transmit the authentic traditional Chinese culture to audience members. The Chinese instruments have a unique timbre and character that cannot be completely captured or replaced with Western instruments, he said, so the difficult undertaking Shen Yun has accomplished was well worth the ingenuity.

Hua said that the 5,000 years of China represents a very ancient culture. The Western audiences may be familiar with American culture, the German-Austrian musical heritage of classical music, and the high culture of Europe, still, there are not many people who know much about traditional Chinese culture—and the music has been key in conveying this rich civilization.

“To let people really feel the content of the culture, the character of the culture, to let people enjoy this year after year, this is a tremendous undertaking, and I think Shen Yun has succeeded completely. People from the Western culture are able to connect to and understand the Chinese culture,” Hua said. As such Hua recommends Shen Yun to those in his circle, especially families with children because it is a wonderful opportunity to experience the traditional culture.

“You rarely—rarely get an opportunity to experience something that shows the richness of 5,000 years. To have something like this land on your doorstep, of course, we should appreciate it,” Hua said.