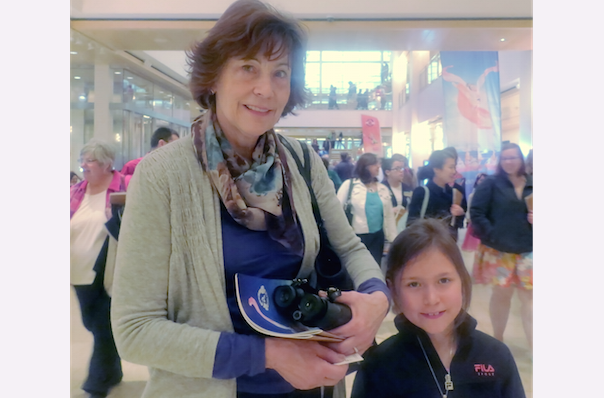 “I came with my seven-year-old granddaughter because she wanted to see the dance and costumes. I think it was really inspiring for her” too, she said in an interview after the performance.

For two nights, Shen Yun performed at the Overture Center for the Arts as part of its 2014 worldwide tour, which includes 18 Midwestern cities.

Shen Yun’s mission is to revive traditional Chinese culture through the performing arts.

“Sophisticated dance techniques, an orchestra joining instruments from both the East and West, beautiful costumes, and a stunning back drop—this is Shen Yun at first glance,” states the company’s website. “But digging deeper, one discovers a sea of traditional Chinese culture.”

She found Shen Yun to be inspiring as well as engaging. “Oh, this performance, well, it is very interesting, said Ms. Boulter, a retired marketing specialist for Boelter & Lincoln, an advertising company.

According to Shen Yun’s website: “Audience members are often surprised to hear that Shen Yun cannot be seen in China today. In fact, there is no other performance like it in China today. … The explanation dates back to the Cultural Revolution and systematic attempts to wipe out the heritage of 5,000 years of civilization.”

Ms. Boulter shared that despite oppression “it sounds like the Chinese spirit survives.”

Through folk dance and classical Chinese that depicts myths, legends, and past and current history, Shen Yun is restoring this divinely inspired culture.

What impressed Ms. Boulter the most was “the creativity and the will to live on and the spirit,” she said.

“The color and the expression are inspiring” as well, she noted.

For philosophical value, what stood out for Ms. Boulter was “probably the truth and beauty win out.”

Truth was felt by her “when the individuals triumphed over all.”

“I found it inspiring and uplifting. It was very nice, yes,” she concluded about Shen Yun.