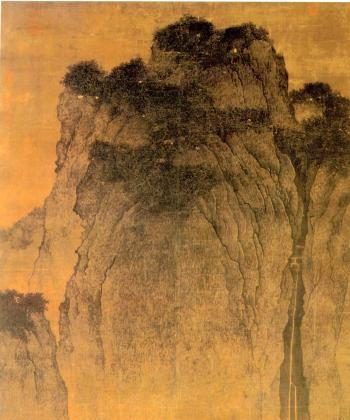 The minuteness of people and animals in Fan Quan’s expansive landscapes is reflective of the Daoist ideal of becoming one with nature. (Painting by Fan Quan)
Arts & Culture

Chinese Painting of the Week—Fan Kuan

Fan Kuan (范寬 990-1030) is known to be one of the leading artists of the Northern Song landscape painting. He began by studying the work of another Song painter, Li Cheng. Later, he concluded that nature was the only true teacher.

Fan Kuan spent the rest of his life as a recluse in the Shanxi mountains. After working in nature for years, Fan Kuan took another step to find his muse in a deeper layer of existence. He created imaginary landscapes that were different, which stressed the importance of imagination and the detachment from reality.

The most famous painting by Fan Kuan is titled “Travelers Amid Streams and Mountains.” It is one of the greatest example of the traditional Chinese landscape paintings and a model for all Chinese artists. This monumental painting is based on the Taoist principle of “becoming one with the nature”（天人合一）.

The painting focuses on the big picture of nature and the world as a whole instead of the individual. Boulders, trees, a mule caravan on the road, walking merchant, waterfall splashing down, and a temple in the forest on the cliff are all vividly depicted in the foreground of the painting. There is a break between the foreground and the central peak behind, looks like it was a backdrop suspended and fitted into a slot behind the foreground.

There are human figures in this scene, but Fan Kuan reduced the size of them in order to reflect the immense power of nature, and it is easy to imagine them overpowered by the magnitude and mystery of their surroundings.