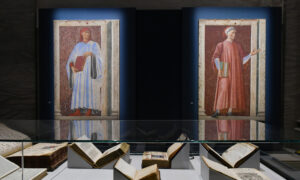 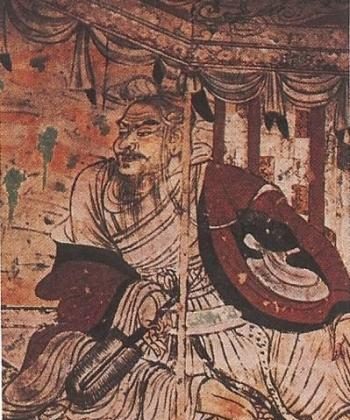 Dunhuang （敦煌）was the gateway to the Silk Road and located in the deserts of Gansu Province in China, far away from the bustling cities of the coast. It made a prefecture in 117 BC by Emperor Hanwu (漢武帝), and was a major point of interchange between China and the outside world during the Han and Tang dynasties.

The caves that Dunhuang are famous for are filled with one of the most extensive and exquisite collection of Buddhist paintings and sculptures in the world. They hold more than two thousand painted statues. The most famous cave in Dunhuang is called Mogao Grottoes. It contains priceless paintings, sculptures, some 50,000 Buddhist scriptures, historical documents, textiles, and other relics that first stunned the world in the early 1900s. The walls of the Mogao Caves include murals that together cover more than 45,000 square meters.

The most famous murals are from Tang Dynasty, depicting graceful heavenly fairies scattering flowers, while dancers and musicians celebrate the beauties of the Buddhist Pure Lands. Tang murals in Mogao Grottoes range from huge paintings depicting scenes from the sutras to vivid portraits of individuals.

One of the most popular Tang murals is the “Visit of the Bodhisattva Manjusri to Vimalakirti.” On the left, the ailing old king Vimalakirti is attended by a host of heavenly beings, eager to hear his discourse. Above him is a seemingly limitless landscape, with the Buddha surrounded by Bodhisattvas on an island in the center. This mural is rich in colors of various kinds and degrees. The painter of it has proved his mastery of the brush with firm landing, heavy pressure and swift movement.