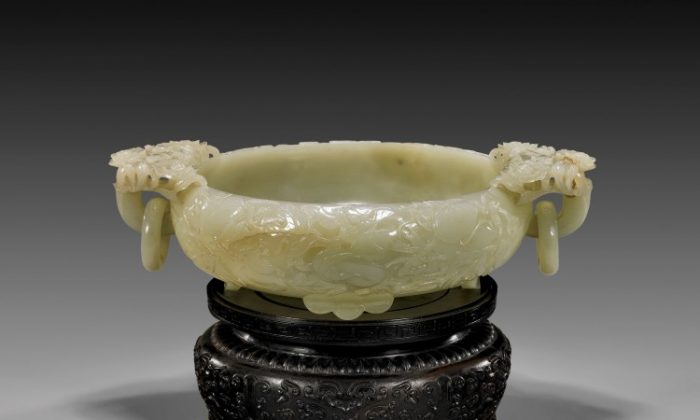 “Anciently superior men found the likeness of all excellent qualities in jade. Soft, smooth, glossy, it appeared to them like benevolence; fine, compact, and strong, like intelligence; angular, but not sharp and cutting, like righteousness. … Its flaws not concealing its beauty, nor its beauty concealing its flaws, like loyalty.”—Confucius

In these words the sage encapsulated how the Chinese have felt toward jade for thousands of years. Not only is the stone itself beautiful, but it represents good conduct, virtue, and moral aspiration. Among all the precious stones in the world, jade continues to hold a position of reverence, fascination, and mysticism.

From Neolithic excavations, archaeologists have found that jade objects were created and used ritualistically among the early Chinese and bore a unique cultural significance.

Tombs from the Liangzhu and Hongshan cultures, which existed in the Yellow River Basin and in Northeastern China respectively during the third and second millennia B.C. were found to be full of small jade items, from personal ornaments and small figurines to ritual axe blades to body plugs that were inserted into corpses’ orifices. It was believed that being buried with jade could preserve either the body or the soul of the deceased, or both.

While human forms were less common, shapes like the hollow columnar cong, the disc-like bi, hoof-shaped ornaments (probably used to hold knots of hair), and pig dragons make up the primary shapes of ancient jades.

The bi and cong are particularly interesting, as their uses are not known, yet they are incredibly prevalent in burials. A theory exists that the round inner surface of the tubular cong symbolizes heaven while the squared outer surface symbolizes Earth.

After the Stone Age passed into the Bronze Age, styles used in jade working were translated into the new technology, but jades never fell out of favor. The designs became more elaborate, the pieces larger and more ambitious. By the Zhou Dynasty (1046–256 B.C.), sizable jade vessels became prevalent, bearing motifs of mythical creatures such as dragons, taotie (gluttonous ogre), and phoenixes, as well as animals.

The forms evolved along with the development of painting. By the Tang Dynasty, artists succeeded in carving entire landscapes onto the sides of brush pots, large jade slabs, and ornaments. By the Qing Dynasty, jade objects became extremely refined, and jade work achieved a level of fluency that maximizes the natural beauty of the stone.

The Many Shades of Jade

The term “jade” is often loosely applied to any green colored, hard stone and sometimes refers to materials that are not jade at all, such as serpentinite, chalcedony, jasper, amazonite, aventurine, even quartz and glass. Sometimes these pseudo jades are sold with names such as “new jade,” “Henan jade,” and “Soochow jade.”

Nephrite naturally occurs in a variety of colors, including cream, yellowish, grey, green, black, and marbled rust. Excavated jades often take the color of yellowish soil. Jadeite is more commonly the milky green to grass green color we typically think of. This green color is the most prized of jadeite colors, but it also occurs in white, grey, blue, lavender, yellow-orange, reddish, pink, violet, brown, and black.

While there is not an easy rule of thumb to tell the two apart short of viewing the materials’ structures with high power magnification, it is possible to observe a few clues.

In order to determine whether a piece is actual jade, jade expert Eric Hoffman suggests performing a scratch test with a steel blade that is harder than jade. If a scratch is made in the material, then the material is a softer, pseudo jade. However, this test cannot identify pseudo jades that are harder than jade. “And of course, true archaic jades that have undergone millennia of surface degradation cannot be tested this way,” Hoffman writes in an essay on Asianart.com.

Even if you have a real piece of jade though, it could still be treated with heat or chemicals to improve color or luminosity. Therefore the surest way to assure the purity of a piece is to have it certified by a reputable dealer.

Jade can be found in Khotan, Burma, New Zealand, and the Americas. However, Chinese jade was traditionally sourced from specific parts of Asia.

One can roughly date a jade piece if one can tell where it came from. The primary source of Chinese jade until the 16th century was the rivers of Khotan (now Xinjiang) in northwest China. Jade found in rivers is often considered to be of higher quality than quarried jade, since it has withstood traveling miles downstream from its original sites.

“The jade used in China appears to have been exclusively nephrite until the eighteenth century, when jadeite from Burma began to be imported,” wrote Andrew Middleton and Ian Freestone in Jessica Rawson’s anthology of Chinese jade.

Spinach-green jade quarried from the Lake Baikal area of Siberia came after the 17th century though it has also historically been found in the west of China.

With a hardness rating of 6.5 for nephrite and 7 for jadeite, jade takes considerable skill to manipulate.

In Neolithic times, jade workers cut and decorated jade using an abrasion method: using quartz sand, a stick, and a string to spin it. Personal ornaments had suspension holes that were drilled from both sides to prevent shattering, according to curator Michael Knight of the Asian Art Museum in San Francisco. According to Knight, a lot of fakes came onto the market in the ’80s after jade ornaments became popular, but the suspension hole with a ridge in the center is indicative of a genuine archaic piece.

As bronze and iron tools came into use, jade workers were able to achieve precise lines and surface details. In the early 20th century, diamond cutting and polishing tools made jade easy to produce quickly. Jade stones made in this manner tend to carry a glossy sheen rather than a soft, satiny glow typical of sand-abraded jade.

The vast and varied history of Chinese jade offers an endless world for the collector. Ming and particularly Qing jade is abundant on the market and fetches a high price, but older jade make a fascinating study into the changing motifs in Chinese culture.

The ritual objects of Neolithic cultures offer glimpses into a world before “Chinese” became a national identity, before an official writing system, and even before Buddhism became a popular faith. Song Dynasty jade tended to be more elegant and simplified in form.

By the Qing Dynasty, under Emperor Qianlong’s auspices, Chinese jade and other arts experienced an explosion of innovation. A myriad of new forms were done in jade, incorporating literary references and auspicious motifs.

It is important to note that the development and trends in Chinese jade is in no way linear. It is often difficult to put a date on a piece of jade because the Chinese have always loved to reproduce styles from the past. They call it fanggu, imitating antiquity, and it is done out of reverence without intending to deceive.

In the past, Chinese collectors sometimes added their inscriptions or poetry to older jade, so that while the piece itself is ancient, the jade work may span centuries.

Though these practices make jade appraisal and collecting that much more challenging, they are also a testament to the endurance of jade’s appeal.