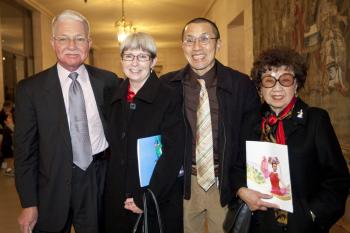 Chinese Dancer Gratified To See Such a Beautiful Performance

BY Leigh Smith TIMEJanuary 11, 2009 PRINT
at the 'Spectacular' in San Francisco (The Epoch Times)”]

Chinese-born Blossom Strong [not her real name] has performed at City Hall many times. She is proud of the dancers and their efforts to present such a wonderful show.

“I enjoyed it very much. … We very seldom see this kind of performance in the United States, and I was really glad that more and more Chinese culture [is shown] to Westerners, which is wonderful.”

“And this show really represents our [traditional] culture.”

Ms. Strong appreciated the traditional Chinese stories performed in the show, particularly Mulan Joins the Battle, a tale in which the heroine Mulan fulfills the twin duties of service to one’s parents and one’s country.

She explained: “Mulan [Mulan Joins the Battle] and the Monkey King [The Monkey King Triumphs], [are stories] which are very, very common in China. We don’t see that very much [in America] except at this [show].

“This is really nice—I am really am proud of this group.”

“I like the music very much and also the costumes—terrific, beautiful.”

This was Ms. Strong’s second time to see this show. She was very appreciative of the DPA performers and the opportunity to see a show of such quality.

The Epoch Times is a proud sponsor of the Divine Performing Arts 2009 World Tour.
For more information, please see DivinePerformingArts.org