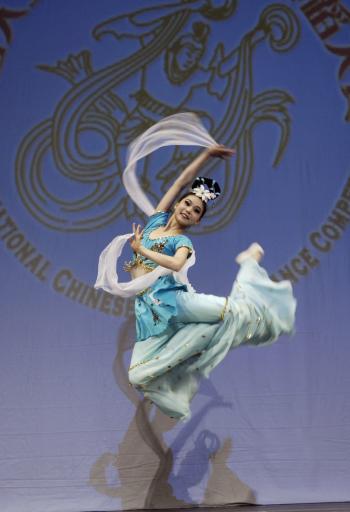 NEW YORK—One Round Down, Two To Go.

Forty-one dancers leapt, spun, and twirled their way into the semifinals of the second annual International Chinese Classical Dance Competition in New York City. The preliminaries were held on Friday, Aug. 22 at the Town Hall Foundation.

The dance competition, hosted by international television station New Tang Dynasty Television, drew dancers from as far away as Australia and Japan. The event aims to revive and promote traditional Chinese dance that became lost in recent Chinese history.

A panel of seven judges consisting of troupe leaders, instructors, and choreographers judged each contestant based on four criteria.

The first criterion is that the performances should be true to classical Chinese dance. “We hope not to see styles from traditional opera, ballet, modern dance or street dance,” said judge Yi Cao.

Judges say that the competition, now in its second year, has helped people to understand what true Chinese classical dance is.

The second criterion is physical bearing, an essential component of Chinese classical dance. One's bearing should express the inner spirit of a subject or character. “Because bearing is the artistic soul of classical Chinese dance, it becomes an important judging criterion,” said Cao. “Dance should convey spirit, character, inner meaning, and even setting.”

Judges assess the third criterion—technique and physical form—differently between the junior and adult divisions. For example, the number of spins a contestant does indicates his or her technique level, according to Cao.

The last criterion is how well the contestant conveys their inner feelings through movement. “Some performances leave you moved by its liveliness and vitality,” Cao said. “This aspect is the most important in the individual choice set portion of the competition.”

“Overall, one big difference from last time is that the contestants are putting more emphasis on conveying the inner meaning and manifesting physical bearing and form, rather than simply demonstrating the techniques,” she said. But technique has not fallen by the wayside, either. “This year, compared to last year, the range of the dance techniques and moves displayed has grown, and so have the topics that are portrayed in the dances.”

In the individual choice set portion of the competition, dancers performed a variety of themes.

“My dance ‘Asking the Heavens’ is about a scholar who searches for life’s meaning and asks why he is in this world,” said Jason Zhu of the junior male division. “In the end, he decides to cultivate and finally finds the Dao.”

Xiya Li, who competed in the junior female division, saw the need to be in a good state of mind while performing. Her piece is called Pure Lotus.

“For me to dance well, I knew I had to make sure I had a tranquil heart,” Li said. “I understood that I was doing this to express the beauty of Chinese culture, and I focused on this instead of focusing on winning or the cash prize.”

For many of the contestants, the competition is a new experience.

“I am so glad to join this competition; it is a great practice,” said Mingye Liu of the adult male division. It is his first time participating in the competition. “Everyone is very hardworking, which is very inspiring for me.”

Liu portrayed an army general in his piece. To play the part, he had to do some research. “We [dancers] have all learned about the Chinese historical figures that we play, because if we want to act out a historical hero, we have to understand that person very well,” he said. “It is necessary to know the exact character and the reason why the person is venerable.

“There are many famous Chinese historical figures in China such as [the hero] Yue Fei and [General] Han Xin, whose loyalty I admire…so I hope to convey this quality through my dance,” Liu said. “I want to act out the process of going through every hardship regardless of the difficulties and obstacles involved, and the determined heart to continue until the end.”

The junior division contains dancers between the age of 14 to 17, and the adult division is from ages 18 to 40.

At the end of the competition, the gold, silver, and bronze winners will claim $10,000, $3,000, and $1,000 respectively. The semifinal round will be held on Saturday, Aug. 23 and the final round on Sunday, Aug. 24. Winners will be announced on Sunday evening following an evening performance at the Manhattan Center Studios at 311 W. 34th St.