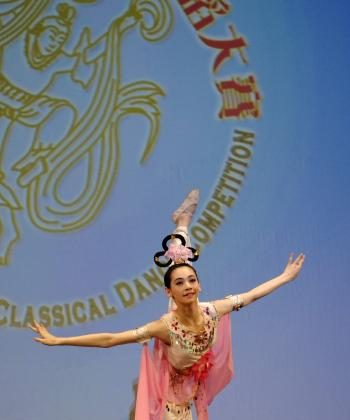 During the competition, an individual routine and a set of required movements were performed by each contestant. Moves such as leaps, turns, and flips, as well as control and tumbling techniques, or, "blanket fundamentals," were all integrated in the contestants’ dance routines. Their dances incorporated the essence of Chinese culture, displaying the splendor of 5,000 years of history.

Cao then offered a simple example on the differences between Chinese classical dance and other types of Chinese dances. “In Chinese classical dance, when dancer sway their long sleeves, it works as an extension of the body,” said Cao. “The overall body figure can appear more open and spectacular or it may also imply a different historical setting. On the other hand, in other types of Chinese dances, dancers may twirl and play with their sleeves as props to demonstrate techniques.”

While scoring each contestant, the judges kept in mind that the essence of Chinese classical dance goes beyond techniques and skill, and is deeply embedded in traditional culture. Instead of focusing on surface elements, the dancers should use their techniques to convey the deeper feelings of the characters they portray.

“In the beginning, it may be hard for westerners,” said Vina Lee, another judge. “Due to distinct cultural elements, the impression of a westerner lifting a leg, raising an arm, and even the gazing of the eyes may differ from that of an easterner.”

One of the finalists from Junior Female division, Miranda Zhou-Galati, is of mixed ethnicity with family from the West. When asked how she became skilled in Chinese classical dance, she said, “My fellow dance classmates are virtually all of Chinese descent. During class, I look at the teacher and try to understand the movements and their inner expressions. I think about why, for the same gesture, the other girls can manifest it more beautifully, and then I just try and do it myself.”

The competitors of this year’s International Chinese Classical Dance Competition came from the world over, with some arriving from as far as Taiwan. The judges and the competitors themselves mentioned that they are very pleased to see so many people interested in Chinese classical dance.

“This is a wonderful beginning,” said Xiu Guo. “The International Chinese Classical Dance Competition will continue in the future, and it will definitely be far reaching.”  The dance contest will be broadcasted globally through satellite and local cable.