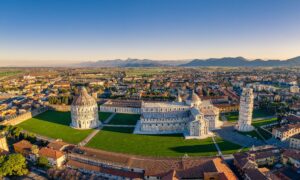 Chinese Business Owner: ‘Everything has so much harmony together’

SAN JOSÉ, Calif.—Ms. Guo, formerly from Beijing, who now lives in San José, owns her own business specializing in bridal image design. She was at the Shen Yun Performing Arts show at the San José Center for the Performing Arts on May 16 with her young daughter and her father-in-law, Mr. Remlinger. He is a department supervisor at a large home improvement retailer.

Ms. Guo, who has a master’s degree in economics, worked for a corporation for a few years as a financial analyst. She then started her own business and also obtained her teaching license from the state of California. She is also a makeup artist.

Enjoying the ambiance in the theater, she and her family commented on the breathtaking show they had just enjoyed.

Mr. Remlinger said he was “very impressed” with the performance. She liked the dance Mongolian Chopsticks and also the drums, saying the show was “really, really moving. [I’m] really impressed. The delicacy of the ladies that were dancing. I haven't seen anything like that in a long time—it was very beautiful.”

Ms. Guo likewise enjoyed the show saying, “I liked the whole thing—I think the whole [show] as it was put together was very beautiful, very graceful. I enjoyed it so much. This is something from my culture—it really touched my heart. So, that’s why I took my whole family here. I bought them all tickets, because I want to share our culture of my country—the traditions.”

“I like every piece. The fans are very nice, very graceful, very beautiful, and very elegant [in Welcoming Spring].

Her young daughter piped up and said she liked Dance of the Yi with the colorful skirts. “I liked the skirts. … I liked that part.”

The Yi people, one of southern China’s largest ethnic groups, are known for their passion for music and dance. As suggested by the colorful movements of this dance, the Yi seize most every occasion to “dance out” their feelings in everyday life.

While it is in Chinese classical dance that the artists of Shen Yun have their foundational training, the New York-based company's performances include Chinese ethnic and folk dance presenting a unique vision of Chinese traditional culture.

Ms. Guo concluded by saying, “I think everything has so much harmony together. The music, costumes, singing, [and] dancing—all beautiful.”