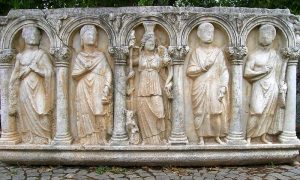 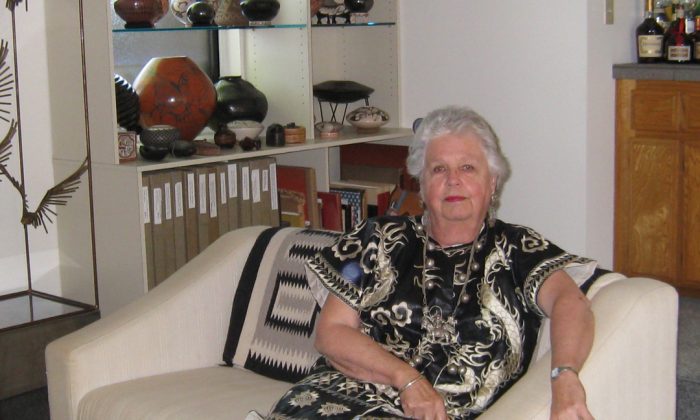 SAN DIEGO—“We went in an old school bus on the main road. Then we had to hike into villages because there were no roads,” said 76-year-old Del Mar resident Bea Roberts, recalling her trip to a remote village in southern China some 16 years ago.

“Sometimes the villagers did not know you were coming, but other times, somehow they knew. They would greet you with their homemade rice wine. As you came up the steps, you are supposed to drink the rice wine. Then you would go into this parade ground where everyone would gather. The men had their Lusheng [bamboo flute]. They would dance and play music.”

While the spontaneous festivities were going on, Roberts and friends would enjoy a display of silver ornaments and handmade cotton and hemp clothing, meticulously embroidered with patterns and symbols representing the history and values of the people, passed down through the generations.

Roberts has long been a cultural anthropologist with a keen interest in adornment and arts. In the meantime, she is a jewelry designer, a textile artist, and an author. Her book “Vanishing Traditions” includes photos and descriptions of the Chinese minorities’ lifestyles. She also developed and chaired the docent program of San Diego Mingei International Museum for 6 years. But above all, Roberts calls herself an “intrepid traveler.”

In an interview with The Epoch Times, she talked about her travels to remote mountainous villages in China over the past decade and her observations on the changes in recent years.

Roberts recalled her first trip to Guizhou: “First of all, that area has very rugged terrain, extremely rugged with steep mountains and deep valleys, and so not easily accessible. That’s why it was great, because the villages were cut off from the outside and they were pure and self-sustained in their own way.”

The group of five was accompanied by a local guide, who also functioned as the translator. “Perched on hilltops, these villages were very small and intimate. There were almost no amenities. We stayed in an old Russian guest house. There were big bunkers, concrete floors, long hallways, one common bathroom, which made a rock look better, maybe water or maybe not. Half of the windows were broken. It wasn’t even near a one star! There were times when we would stay with the villagers in their houses,” recounted Roberts.

Despite poor lodging conditions, Roberts loved what she saw and stayed there for three weeks. Exactly what a true “intrepid traveler” would do!

There was no written language in these villages. So their history and values are embroidered and woven in their traditional clothing, thus making it a very significant part of their identity.

In Roberts’ book, she wrote, “The Miao people have few possessions. It is said that during the Long March, Mao’s Red Army soldiers often came upon these nearly nude people living in caves. What traditional clothing they had, they kept hidden, as the government did not support individual customs and traditions. It is therefore understandable how important these traditions are to them. Their most valuable possessions were their richly woven and embroidered festival costumes, which identify them as belonging to a specific group and also indicate their family wealth status.”

The Dilemma of Modernization

Roberts went back to Guizhou several times, with the latest trip in 2009. Each time she went, she saw changes brought to the villages. Roads were built, guesthouses were remodeled, and tourists poured in. The villagers’ living conditions seem to have improved, but with the cost of their traditions disappearing. To Roberts, this is a tragedy.

“They were pure in their own entity and self-sustaining, that is, up until the roads were built. It is more accessible now and this is the tragedy. Now if you go there, there are only grandmas and kids. The rest are all gone to work somewhere else. No one cares about the traditions anymore,” she said.

“When we went to the villages, they wouldn’t happily dance anymore. Now, because of the way they are being treated, you can just see by the looks on their faces that they are performing because they are paid to do. This is not something from inside. That’s a real tragedy.”

On her last trip, she visited Beijing, China’s capital.

“In 2009, I went to the Beijing Olympic village, where they have a Minority Park, with the Dong Village, the Miao Village, and so on. It’s like Disneyland and I wanted to scream! Because it has nothing to do with how it really was.”

“I see that there could be two totally different Chinas. People who live in major cities have no realistic association with the rural area. I also see this in other parts of China.”

She’s noticed this dilution and commercialization of ethnic culture elsewhere in the country, as well.

“I have been all over the Silk Road in Xinjiang Province. I’ve been to the Dunhuang Caves. Way back when, I took the rumble-dumble train, which didn’t even stop at the Caves. It would only slow down. Now there are hotels everywhere on the Silk Road.”

Xinjiang Province is in the far west of China, with long borders on Mongolia and Kazakhstan, and is home to the Uyghur ethnic group.

“I’ve been out there in the Uyghurs area in the early days. I saw how the Uyghurs had been devastated since the Han Chinese came in. First, they sent dissidents there. Then they discovered rare earth minerals, such as uranium. So they brought in more people and started mining. Then the Han Chinese realized that they had a problem because the area was well established with minorities. So, just like what the Russians did, Han people were sent there and were given a job: you find a wife in 2 months, or we find you one.”

“When we went to Kashgar,” she said, about a city in Xinjiang, “it was fabulous, amazing. But now, you read in the papers, uprisings.”

“Same thing happened in Tibet. I was in Lhasa before the Han Chinese came in. As soon as I saw they were building the railroad, I thought: ‘it’s finished.’”

The Value of Tradition

Roberts wrote the following paragraph to end her book: “Review of the changes in minority China has been both spectacular and troubling. It must be recognized that the minority groups are not museum pieces. They deserve modern conveniences of education, medical treatment, access to markets, and integration into wider society, and all this is proceeding rapidly.

As a Westerner, Roberts has a rare sense of appreciation and understanding of ancient culture. Her Southern California home is filled with “valuables” from all over the world. It is very gracious of her to offer her prized collections for public viewing, free of charge.

Her last exhibition was at the UC Davis Design School. “There are many students from China at the Design School. They came to my exhibition, and I realized that they know nothing about their own country’s minority groups and history. I hope they can learn something from it,” Roberts said.