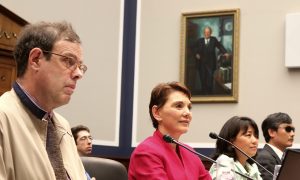 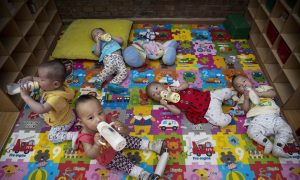 China's New Two-Child Policy: Throwing a Bone to the Public as the Economy Declines
0 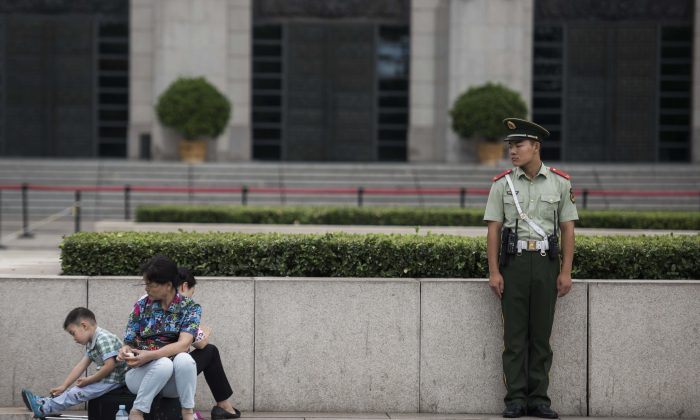 Many pregnant women in China, hoping for a second child, still have to hide to avoid forced abortion, say witnesses at a CECC congressional hearing
By Gary Feuerberg
Print

WASHINGTON—Chinese women and their families are likely to continue to suffer the pain and anguish of forced abortions, involuntary sterilizations, and crippling financial penalties under China’s new two-child policy, just as they have been under the 35-year-old one-child policy. That’s the consensus of testimony given on Dec. 3, at the Congressional-Executive Commission on China (CECC) hearing.

Chairman Chris Smith (R-N.J.) conceded that the new policy may allow for more births, but it doesn’t change the incentive for “local officials to pressure or even force mothers to abort a child if the birth hasn’t been approved by the state and is/or the couple’s third. Chinese families are still not free to determine the size of their own families.”

Reggie Littlejohn, president of Women’s Rights Without Frontiers (WRWF), said the family planning restrictions will still be in force. Women still will have to obtain a permit to have the first and second child or be subject to forced abortion.

Chinese families are still not free to determine the size of their own families.
— Rep. Chris Smith (R-N.J.), chairman, Congressional-Executive Commission on China

“It will still be illegal for an unmarried woman to have a child. Regardless of the number of children allowed, women who get pregnant without permission will still be dragged out of their homes, strapped down on tables, and forced to abort babies that they want,” she said.

Senator Marco Rubio (R-Fla.), who is co-chairman of the CECC, did not attend the hearing but provided a statement for the record. As a father of four, he wrote poignantly that the new policy doesn’t change the past trauma that Chinese families suffered under the old policy: “women still grieving the child they were robbed of, parents adrift after losing the only child the government allowed them to have, families too old to take advantage of this policy change. Sadly these type of stories will continue under the new policy.”

The hearing cleared up another misconception. China’s official news agency, Xinhua, reported on October 29 that two children for all couples would be allowed. However, subsequent statements in Xinhua in early November described the two-child policy as not yet valid and still a “proposal” that would have to be approved by Beijing’s legislature next year, said Dr. Nicholas Eberstadt, demographer at the American Enterprise Institute for Public Policy Research.

The two-child policy is not a reality for Sarah Huang, Chinese mother and activist, who with her husband went into hiding when they realized that the two-child policy would not apply to them for some unknown reason. To protect her identity, Huang spoke from another location outside the hearing room, where she could be heard but not seen. She and her husband wanted a second child for many years, she said through a translator. Thinking that the one-child policy had been rescinded, they thought their problems were solved and were happy for other families that wanted more children too. But the Chinese state, her husband’s employer, told him that an “abortion would be necessary and mandatory.” Her husband “was given threats and a deadline to prove that abortion had been completed.”

Huang said that she and her husband have had to work hard to keep state officials from forcing an abortion. “Because of this reality, I have had to risk fleeing to America in order to protect the baby in my womb.” She said she was “proud to be Chinese” but that she felt compelled “to speak out on the reality of what is happening in China.”

I have had to risk fleeing to America in order to protect the baby in my womb.
— Sarah Huang, Chinese mother and activist

After her baby is born, presumably in the United States, the family will return to China, and probably pay a fine “close to $36,000″—a lot of money for most Chinese people. (According to a 2013 study by Peking University, the average, annual family income in urban areas was US$2,600)

If the new policy is ever enacted, it certainly will not be done out of compassion for the Chinese people, said Steven W. Mosher, president, Population Research Institute. It’s not the over 400 million abortions, or the hundreds of millions of young mothers forcibly aborted and sterilized over the past 35 years, or China’s tens of millions of missing girls that they regret, he said.

“What keeps them up at night is the dawning realization that their misguided policy is crippling China’s future economic growth. For at least the past two years, China’s workforce has been shrinking. Last year, the potential workforce fell by 3.71 million. … At the same time, the over-sixty population is exploding.”

China’s one-child policy involving a system of family planning police, and the government monitoring of births using coercive measures of forced abortion, involuntary sterilization and contraception didn’t just suddenly appear in 1980. According to Mosher’s written and oral testimony, the Chinese Communist Party, under Mao Zedong, developed a “Planned Birth” (“jihua Shengyu”) program that was operational by 1953, which, except for major political upheavals, such as the Great Cultural Revolution, has continued to this day.

The coercive nature of the Planned Birth policy was stepped up in the early-to-mid 1970s before the start of the one-child policy. Mao thought couples determining their own family size was “anarchy” and that family planning with guidance from the state was superior to the old customs and traditional concepts.

Mosher wrote that when he did his first field research in a rural area in Guangdong province in the 1970s prior to the one-child policy, “every women of childbearing age with three or more children was either inserted with an IUD, or given a tubal ligation.” Some women had been sterilized under duress. Mosher concluded that “local cadres had followed their orders to the letter.”

The communique of October 29 announcing the new two-child policy is written in the typical CCP slogans for the occasion: “Thoroughly implement the policy of each couple birthing two children or actively begin to address the aging of the population,” he wrote.

Despite the propaganda, it is apparent that the coercive policies are highly unpopular with ordinary Chinese. Jennifer Li, who is not Chinese, moved with her husband to China seven years ago. She testified at the hearing, “As to the question, ‘do you want more than one child?’ I asked the question of hundreds of people, old and young, during my time in China, and every single time, the answer is ‘yes,’ I wish I could have as many as I want. But I can’t.'”

Li is the co-founder of China Life Alliance, which is a religiously based network of individuals, churches and ministries, who rescue those lives that are threatened with abortion, infanticide, abandonment, and trafficking, according to its website.

Huang said, “In my country, China, we have a saying, ‘a woman’s body is not her own.’ In fact, we have been told this all our lives. This way of thinking has penetrated every aspect of our culture and has forced women like me who are pregnant to be required to abort and abandon our babies.”

Littlejohn reported some feedback she received from villages that WRWF keeps in touch with. The new two-child policy is not viewed as a big improvement because the threat of sterilization doesn’t go away. If a woman has a boy as her first child, she is likely to not have a second child, because if she did, she would be forcibly sterilized. These sterilizations are ruinous to one’s general health.

[New policy doesn’t change the past trauma under the old policy:] women still grieving the child they were robbed of, parents adrift after losing the only child the government allowed them to have…
— Marco Rubio (R-Fla.), co-chairman, Congressional-Executive Commission on China

“They never recover their strength,” said Littlejohn, who cited an example in a village where sterilized women could no longer pump water from a deep well.

On the other hand, if the first child is a girl, under the new policy, Littlejohn was told that women will want to hide their second pregnancy, because they will be automatically sterilized after the second child. Many women will abort their second daughter under the two-child policy because the couple won’t be able to try for a boy after mandatory sterilization following a second child. Alternately, the couple may have the second daughter and keep it hidden and not have it registered, thereby avoiding sterilization and retaining the possibility of having a son.

How Can Chinese Households Spend If Their Incomes Are Declining?

Jennifer Li, who at the hearing described the life of a daughter of a single mother: This girl-child will be denied “hukou,” which means she will be treated as a non-citizen, and “cannot go to [public] school, be treated in a hospital, or travel.” Only married couples are permitted to have children in China. So the daughter was not issued a birth certificate. Lacking an ID card, she will also be denied legal employment, marriage, and state welfare benefits, and could fall victim to exploitation.

The regime’s 2010 census discovered an astonishing 13 million undocumented persons in China, writes Stephanie Gordon in The Diplomat. Parents were encouraged to come forward and were promised that the information would not be divulged to local police or the family planning department. Still, the number is a minimum estimate and undoubtedly doesn’t count them all.