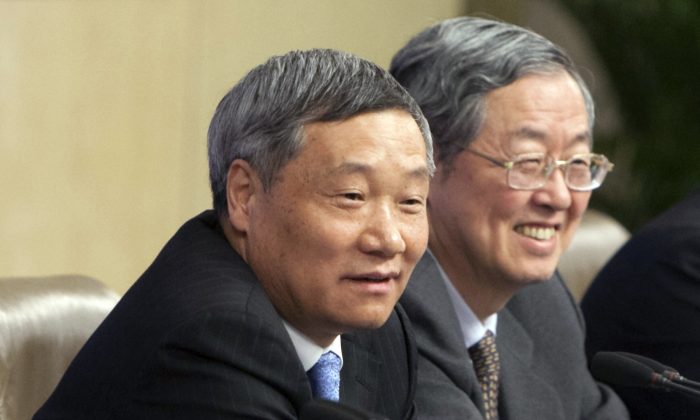 Then head of China Securities Regulatory Commission Xiao Gang (L) and Zhou Xiaochuan, governor of the People's Bank of China, at a press conference in Beijing, China, on March 11, 2014. Xiao who was appointed China's top securities regulator in March 2013 will step down following months of turmoil in the Chinese stock markets, the state-run news agency said Saturday, Feb. 20, 2016. (Chinatopix via AP)
China

BEIJING—China’s top securities regulator will step down following months of turmoil in Chinese stock markets that have battered faith in Beijing’s economic management.

The departure of Xiao Gang, a legal expert with decades of experience in the finance industry, may help assuage public anger at the dramatic boom and bust, but doesn’t address the market’s underlying problems.

State mouthpiece Xinhua News Agency reported on Feb. 20 that Xiao would be replaced by Liu Shiyu, chairman of the Agricultural Bank of China and a former deputy governor of China’s central bank.

His departure will not bring a clean era for China’s capital, but at most a belated consolation for investors who have been hurt.
— Shi Shusi, veteran financial commentator

“Xiao Gang is worth no pity but he is destined to be a tragic figure, caught between pro-government and pro-market factions and left to take care of a mess from an unhealthy system,” Beijing-based veteran financial commentator Shi Shusi said. “His departure will not bring a clean era for China’s capital, but at most a belated consolation for investors who have been hurt.”

The capital market is where China’s rivaling political forces have come into most intense clashes, Shi said. The unusual intervention by the Ministry of Public Security and investigations against securities firms following market meltdowns are proof that covert political forces within the Chinese government had made waves, Shi said.

As China transforms, the capital market is where political forces wrestle with each other and is where the conflicts play out.
— Shi Shusi, veteran financial commentator

“As China transforms, the capital market is where political forces wrestle with each other and is where the conflicts play out,” he said.

Fueled by cheerleading in the state press after officials said Chinese stocks should rise, the Shanghai and Shenzhen markets vaulted from late 2014, reaching a peak in June last year, then crumbled in several waves of panic selling that sent shockwaves around the world.

Officials prolonged the turmoil with draconian measures such as banning major shareholders in publicly traded companies from selling any shares and ordering state funds to buy. The bust hurt millions of neophyte Chinese investors who piled into the market when it was near its peak.

Analysts say Beijing’s moves on stocks, as well as its halting steps to ease currency controls, show the tension between the ruling Communist Party’s desire for market-oriented reform and its overriding objective of retaining absolute political control.

The Shanghai Composite Index closed at 2,860.02 on Friday, a decline of about 45 percent from its peak in June of about 5,178 and barely higher than late 2014, when the market started rising.

Liu, the new chief securities regulator, was trained in engineering at the prestigious Tsinghua University and started a career in the state banking industry in the late 1980s.

Xiao, who was appointed in March 2013, was particularly criticized for the mishandled introduction of a “circuit breaker” mechanism for the markets in January that halted trading when prices fall by a certain percentage.

It was meant to help stabilize Chinese stocks as authorities gradually withdrew their emergency support measures, but only added to the turmoil.