China’s Senior Health Officials Struggle to Answer Questions about Coronavirus, as Another City is Under Full Lockdown 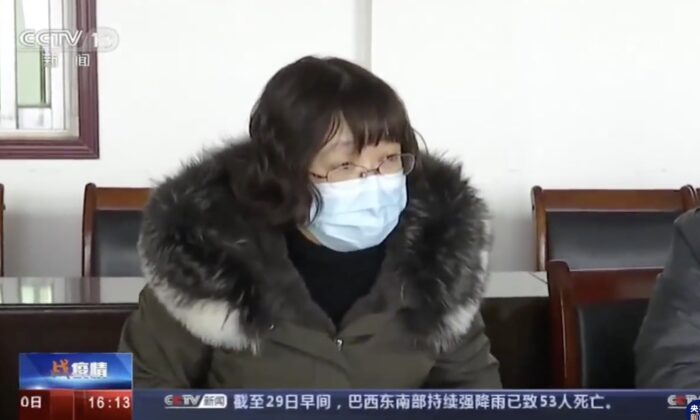 Several Chinese officials recently had media interview mishaps in which their lack of knowledge about measures to contain the coronavirus was on full display.

The outbreak was first reported by Chinese authorities on Dec. 31, 2019, but the disease first emerged in the central Chinese city of Wuhan in early December. Wuhan is the capital of Hubei Province.

It has since spread to all Chinese provinces and regions, as well as more than 20 countries around the world.

Meanwhile, Huanggang City, to the east of Wuhan, decided to enact a ban against vehicles from entering and leaving the city—suggesting that the scale of the outbreak there is far worse than what authorities are reporting.

On Jan. 29, the Beijing central government sent a working team to Huanggang. The team held a meeting with Tang Zhihong, chief of the city’s health commission, and Chen Mingxing, director of the city’s Center for Disease Control and Prevention (CDC).

When prompted with questions by the experts from Beijing, Tang couldn’t answer.

In the CCTV video, the Beijing experts asked the current capacity of hospitals in the city. Tang kept silent. When pressed again, Tang answered: “We have an official who is in charge of this issue.”

The experts asked what was the current number of confirmed cases in Huanggang. Tang first said it was “more than 200,” but Chen chimed in and said: “118.”

They also asked, “How many patients are being treated in the hospitals?” Both Tang and Chen didn’t answer.

This angered Chinese netizens, who commented on the news segment on social media.

The next day, the Huanggang government announced that Tang has been dismissed from her position.

Previously, on Jan. 23, Sheng Wenjun, the Chinese Communist Party secretary of the quarantined Chibi City, inspected the area’s response to the coronavirus. He wore a surgical mask, but the mask only covered his mouth. His nose was exposed to the air directly.

During a recent press conference, some officials also revealed that they could not wear their masks properly.

At a Jan. 26 press conference, governor of Hubei Province Wang Xiaodong did not wear a mask; but Hubei secretary Bie Bixiong did. However, his mask also did not cover his nose. Wuhan mayor Zhou Xianwang wore a mask, but wore it inside out.

According to the new rule, all roads in the Huanggang municipal area would be closed at midnight Jan. 31, with physical barriers and checkpoints.

No vehicles can use the roads except “those for outbreak prevention and control, medical rescue, basic needs, and emergency rescue,” the announcement read.

Taxis will only be allowed for expectant mothers, patients of severe illness, and so on. Only a certain number of taxis are allocated to each neighborhood.

Hubei governor Wang said at a Jan. 29 press conference that the number of confirmed cases are quickly increasing in Huanggang and three other nearby cities—Xiaogang, Jingmen, and Xianning. He said he was worried Huanggang could become another Wuhan.

According to official statistics as of January 2019, Huanggang has 6.34 million residents.

Chinese authorities only began updating the outbreak death toll since Jan. 22. But experts from the UK and Hong Kong have estimated that the true figure of infections could reach 250,000 people in Wuhan alone by Feb. 4.

In recent days, some Chinese officials have made indirect hints at the true scale of the outbreak.

Liu Yingzi, director of the Hubei health commission, said on Jan. 29 that there were more than 170,000 medical staff working on the frontlines treating coronavirus patients.

Meanwhile, doctors from Hubei hospitals told state-run media that they lack the human resources to treat patients. Some of them have worked for more than 24 hours straight.

On Jan. 22, state-run Jiangsu Television reported that a Wuhan doctor was infected with the coronavirus after treating patients for 11 days. He was under self-quarantine and told his family members that he had worked 26 hours straight, as there were too many patients at the hospital.

And at a Jan. 30 press conference, Zhang Wenhong, leader of the outbreak response team in Shanghai, said: “Based on the current situation, this coronavirus will spread more broadly. I’m responsible for my words here and I can tell you the estimation of overseas experts are correct,” he said, without naming which experts he was referring to.

On Jan. 29, Zeng Guang, the chief scientist of epidemiology at China’s CDC, made a rare candid admission about why Chinese officials cannot tell people the truth, in an interview with the state-run tabloid Global Times.

“They [the officials] need to think about the political angle and social stability [in order to keep their positions],” Zeng said.