Coronavirus Could Infect 250,000 in Wuhan in Next 11 Days, Researchers Say 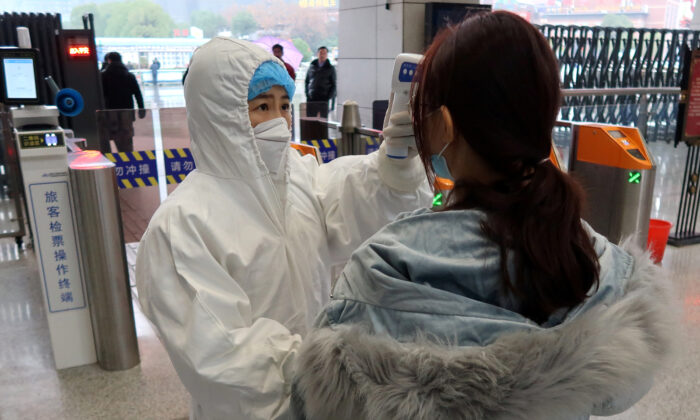 A worker in protective suits checks the temperature of a passenger arriving at the Xianning North Station on the eve of the Chinese Lunar New Year celebrations, in Xianning, a city bordering Wuhan to the north, in Hubei province, China, on Jan. 24, 2020. (Reuters/Martin Pollard)
By Cathy He

The new coronavirus could infect more than 250,000 in the Chinese city of Wuhan alone by early February, according to a new study by researchers.

The study, done by biostatistical researchers in the UK and the United States and released on Jan. 24, projects a drastic escalation of the viral outbreak in China.

“If no change in control or transmission happens, then we expect further outbreaks to occur in other Chinese cities, and that infections will continue to be exported to international destinations at an increasing rate,” it said.

Researchers said their model predicted that by Feb. 4, infections at the disease center in Wuhan will surge to 132,000 to 273,000 people. The central Chinese city, with a population of 11 million, has been put under lockdown in an effect to stem the spread of the virus. Transport lockdowns have also been imposed on 12 other cities in the region, affecting more than 30 million people.

The study, however, said the travel restrictions in Wuhan “are unlikely to be effective in halting transmission across China.”

“With a 99 percent effective reduction in travel, the size of the epidemic outside of Wuhan may only be reduced by 24.9 percent on 4 February,” it added.

The study projected that the largest outbreaks outside the epicenter would be in the cities of Shanghai, Beijing, Guangzhou, Chongqing, and Chengdu.

Researchers also predicted that the countries or regions at greatest risk of importing infections through air travel are Thailand, Japan, Taiwan, Hong Kong, and South Korea. Both Hong Kong and Thailand have five confirmed cases, Taiwan has three, while Japan and South Korea each have two confirmed patients with the virus.

The United States on Jan. 24 confirmed its second coronavirus case in Chicago, with the first confirmed case reported in Washington state on Tuesday. More than 60 patients are currently being investigated in 22 states, the Centers for Disease Control and Prevention said on Jan. 24.

Earlier on Jan. 24, researchers in Wuhan said that infected patients have presented new non-respiratory related symptoms, such as diarrhea, chest pains, and headaches, suggesting that the virus may be harder to identify than initially thought.

Official description of the symptoms of the virus is currently limited to fever and respiratory issues such as coughing and breathing difficulties.