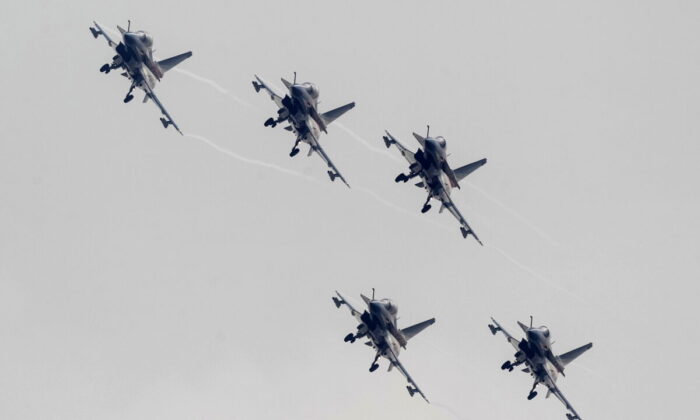 It’s late May and an Australian surveillance plane flies through the azure skies above the South China Sea. The crew of the aircraft is on a routine surveillance mission in international airspace. They don’t expect trouble.

It launches flares and cuts fast and close across the nose of the Australian aircraft. The fighter then deploys its chaff, a bundle of tiny metal strips typically used as a countermeasure to disrupt an enemy’s radar systems.

The innumerable little shards of aluminum are immediately sucked up into the engines of the surveillance plane, damaging the aircraft, putting its crew at severe risk, and cutting the Australian mission short.

While international leadership has refrained from considering the event an act of war, it is just one of a growing number of hostile encounters between the military forces of China’s communist regime and those of America’s closest allies.

“Quite obviously, this is very dangerous,” Australian Defense Minister Richard Marles said after the incident.

Yet it’s just the latest in a long line of aggressive and at times reckless stunts carried out by the Chinese military in its efforts to intimidate Western allies away from the Indo-Pacific.

Tan Kefei, a spokesperson for China’s Defense Ministry, accused the Australian crew of “disregard of repeated warnings from the Chinese side” and of entering airspace over the Paracel Islands, a disputed territory of which China, Taiwan, and Vietnam all claim ownership.

Tan didn’t present any evidence to support the claim.

Nor did he connect the dangerous maneuver to a growing number of incidents conducted by the Chinese Communist Party’s (CCP) military wing, likely intended to intimidate U.S. allies away from engagement in the Indo-Pacific region.

Indeed, Chinese fighter pilots are becoming increasingly aggressive with international encounters to the point of recklessness, frequently “buzzing” allied aircraft and ships, flying so close as to cause turbulence and force allied missions to take detours from their intended routes.

Most recently, Chinese fighter jets flew within 20 feet of a Canadian surveillance plane—close enough that the Canadian pilots could make eye contact with the Chinese pilots, who then presented the Canadians with a middle finger, according to canada’s Global News, which cited unnamed government sources.

According to a separate Global News report, there have been more than 60 such interceptions of Canadian aircraft by Chinese fighters in international waters in recent months, including several in which Chinese pilots opted to play “chicken” with Canadian pilots, forcing them to change their flight path in order to avoid a mid-air collision.

To the questions of why now, why America’s allies, and why like this, there are few exceptional answers that highlight the ambition and strategy of the CCP in the Indo-Pacific.

One reason for such intimidation is that the CCP is seeking to obscure evidence of its own wrongdoing. The CCP is currently suspected to be violating sanctions against North Korea by illicitly transferring oil to North Korean ships at sea, for example. The Canadian planes so closely buzzed by Chinese forces were part of Operation Neon, a U.N. mission to track just such sanctions breaking from North Korea and prevent the hermit state from developing a nuclear weapon.

However, the tactic of using high-publicity stunts and intimidation goes back much further than China’s likely sanction busting and has deep precedent in the past 20 years of CCP propaganda and doctrine.

Back in 2001, a Chinese fighter pilot named Wang Wei, who had his own long history of buzzing Western aircraft, collided with a U.S. Navy surveillance plane and was killed after ejecting from his fighter jet over the South China Sea.

Then-CCP leader Jiang Zemin subsequently declared Wang a “guardian of the seawaters and airspace,” and CCP propaganda celebrated him as a “revolutionary martyr,” forever enshrining his actions in the cultural lexicon of Chinese military tactics.

The granting of martyr status to Wang was also tied chronologically to the adoption of the CCP’s “three warfare” and “unrestricted hybrid warfare” strategy, which sought to maximize the politicization of everything for the sake of propagating communism.

Now, 21 years later, Xi Jinping’s CCP is unloading a new barrage of military psychological operations against the United States and its allies in an apparent attempt to push the Western powers into a retreat from influence in the Western Pacific.

In a tense meeting with U.S. Secretary of Defense Lloyd Austin on June 10, Chinese Defense Minister Wei Fenghe said the CCP was ready for war “no matter the cost.” That meeting was supposed to have focused on setting guardrails for the two powers in an effort to prevent a catastrophic miscalculation that could start just such a war.

Soon thereafter, Xi announced 59 new regulations for the military with the intent of preparing China for “nonwar” military operations, echoing similar language used by its partner Russia to refer to the invasion of Ukraine.

That, in turn, was followed by another announcement that China and Russia would increase “strategic coordination,” including military ties.

In each incident, the CCP followed a well-established pattern of saying post hoc that it was acting in defense of its sovereignty, precisely the language used to justify the needless violence and death of the pilot Wang 21 years ago.

With the exception of one close encounter between U.S. and Chinese fighter jets, the CCP’s campaign of aerial intimidation has focused heavily on U.S. allies, but not the United States itself.

According to one expert, this is deliberate and is most likely an attempt to drive a wedge between the United States and its allies in the region, whom it depends upon as part of its national strategy—and from whom it will desperately require assistance in the event that it’s drawn into a war over the continued de facto independence of Taiwan.

According to Fleming, the frequency and showmanship of China’s aerial aggression ought to be considered within the CCP’s larger campaign of unrestricted hybrid warfare, through which it seeks to erode the capabilities and influence of Western democracies through military, legal, economic, and psychological means.

“Hybrid warfare is based on weakening your enemy through any and all means possible,” Fleming said. “[These] intimidation tactics are meant to show strength and willingness to fight should a ground war take effect in Taiwan.”

As such, recklessness in air-to-air confrontations between the CCP and allied forces shouldn’t be considered isolated incidents. Rather, they’re a key part of China’s strategy to demoralize and weaken U.S. allies and partners whom China’s communist leadership fears may assist the United States in the event open conflict erupts in the Indo-Pacific.

To that end, Fleming said the best practice Australian, Canadian, and other allied forces could implement was to document and publicize each and every encounter and continue to demonstrate their ability to fly freely through international airspace in spite of CCP outbursts.

“Our allies need to record and document these intimidation tactics while continuing undeterred in their legal flights,” Fleming said.