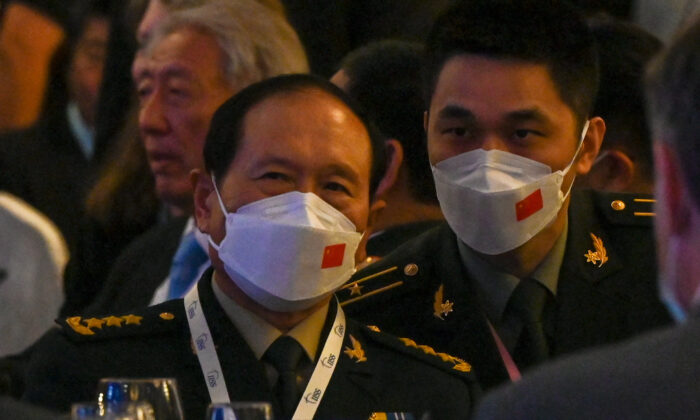 China Will ‘Not Hesitate to Start a War’ Over Taiwan: Chinese General Tells US Defense Secretary

China’s defense minister threatened war over the issue of Taiwan during an intensely heated exchange between top Chinese and American defense officials.

“If anyone dares to split Taiwan from China, the Chinese army will definitely not hesitate to start a war no matter the cost,” said China’s defense spokesman Wu Qian, quoting Chinese Defense Minister Wei Fenghe.

The saber-rattling took place during the first face-to-face meeting of U.S. Defense Secretary Lloyd Austin and his Chinese counterpart Wei, who met on the sidelines of the Shangri-la Dialogue, a major defense summit, in Singapore for about half an hour on June 10.

The Chinese minister also vowed that Beijing would “smash to smithereens” any effort to maintain Taiwan as an independent nation, vowing the island and its territories would be brought into China as part of the “unification of the motherland.”

A statement released by the Pentagon shortly after the meeting did not mention the tenor of the talk or any specifics.

“The Secretary reiterated to General Wei that the United States remains committed to our longstanding one China policy, which is guided by the Taiwan Relations Act, the Three U.S.-China Joint Communiques, and the Six Assurances,” the statement said.

“The Secretary reaffirmed the importance of peace and stability across the Strait, opposition to unilateral changes to the status quo, and called on the PRC to refrain from further destabilizing actions toward Taiwan,” it added, referring to the acronym for the regime’s official name, the People’s Republic of China.

Wu said after the exchange that the talks were a “good start,” and requested Austin meet with Chinese officials again while he was in Asia.

The Chinese Communist Party (CCP), which rules China as a single-party state, considers Taiwan to be a breakaway province. CCP leader Xi Jinping has vowed to unite the two entities, and has not ruled out the use of force to do so.

For its part, Taiwan has been self-governed since 1949 and has never been under the control of the CCP.

Since 1979, the United States has acknowledged the CCP’s government to be the only entity representing China, and has not recognized Taiwan as an independent nation. Washington does, however, maintain a commitment to Taipei, outlined in the Taiwan Relations Act, in which it guarantees it will provide Taiwan with the military capabilities required to defend its autonomy.

U.S. military leadership believes that the CCP is preparing for an invasion of the island, and could launch such an attack by 2027. The question of whether the United States would militarily intervene in such a situation is an open one.