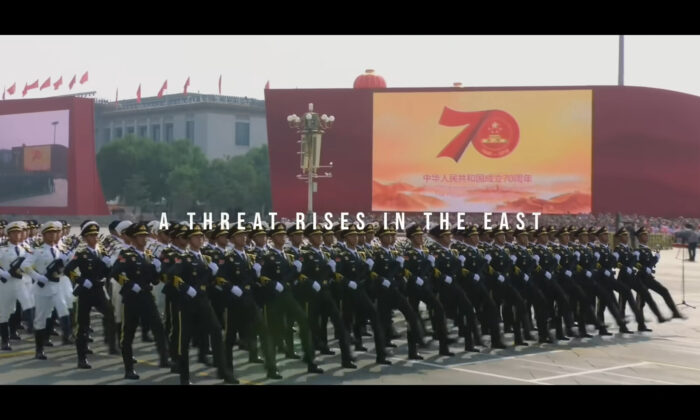 The video "Ghosts in the Machine" by the U.S. Army's 4th Psyop Group displays an ominous warning about the threat from China and Russia. (Screenshot)
US-China Relations

‘Anything We Touch Is a Weapon’: New US Psychological Operations Recruitment Video Casts Spotlight on China Threat

The phrase “A threat rises in the East” is superimposed over rolling footage of Chinese and Russian military parades. Eerie, ethereal music plays as cinematic impressions of the Eurasian alliance between China and Russia are interspersed with images of the past century’s most emblematic struggles for democratic values.

There’s footage of the fall of the Berlin Wall, a free speech protest in Hong Kong, the toppling of a Saddam Hussein statue in Baghdad, and the resolute stand of Tiananmen Square’s “Tank Man.”

This isn’t some documentary about the myriad threats democracy has faced time and time again, but a new video created by the Army’s 4th Psychological Operations Group and shared on social media by U.S. Special Forces Command.

Equal parts recruiting video and actual psychological warfare, the project might best be described as a proof-of-concept for the military’s capability to build confidence at home and instill fear abroad.

The video, aptly titled “Ghosts in the Machine,” opens with a quote from “The Art of War,” written by Chinese military philosopher Sun Tzu some 2,500 years ago:

“If your opponent is of a choleric temper, seek to irritate him. Pretend to be weak, that he may grow arrogant.”

At first glance, one might think the quote suggests that the Chinese Communist Party (CCP) has been pretending to be weak for years in order to lull the United States into a false sense of superiority. By the end of the three and a half minutes of growing unease, however, one wonders whether it hasn’t been the other way around all along.

Indeed, that may be just the purpose of “Ghosts in the Machine.” After all, the video itself is psychological warfare.

To realize the importance of psychological operations such as “Ghosts in the Machine,” one needs to look beyond its visage of cinematic splendor and intentional creepiness, and penetrate to the threat that the video is working against.

According to innumerable reports from the nation’s think tanks and institutions of higher learning, the United States is in a war, although its leadership seems largely unaware of it. It’s a war without conventional weapons, but is nevertheless being fought in hearts and minds everywhere. Indeed, it’s a war on the minds of Americans everywhere.

It’s a psychological campaign of unrestricted hybrid warfare perpetrated by the CCP with the purpose of eradicating the United States’ will to defend itself and preserve democratic values.

According to one report (pdf) published by the Washington-based think tank Hudson Institute earlier this month, this psychological warfare is one part of a suite of so-called cognitive operations used by China’s communist regime to undermine U.S. security.

“Cognitive operations involve using psychological warfare to shape or even control the enemy’s cognitive thinking and decision-making,” the report states.

Indeed, the report quotes directly from the primary propaganda organ of the Chinese military, the PLA Daily, that the ultimate aim of cognitive operations is to “manipulate a country’s values, national spirit/ethos, ideologies, cultural traditions, historical beliefs, etc., to prompt them to abandon their theoretical understanding, social system and development path, and achieve strategic goals without victory.”

In not so many words, it’s a military campaign against the United States to convince Americans to give up their society without fighting.

It is, according to a report by the Johns Hopkins School of Advanced International Studies (pdf), a “long-standing Chinese government strategy to exploit foreign media to deliver Chinese propaganda.” The goal is to destabilize and otherwise interfere in the political processes of the United States by offering a “sugar-coated pill,” something easy to swallow but lethal to consume, often in the form of anti-American propaganda disguised as domestic information and reproduced online.

“According to the PLA, China is already in constant battle over the narrative of China’s rise and the PLA’s intentions with other nations, both inside and outside of China, and, most prominently, against the United States,” the report states, referring to the People’s Liberation Army, or China’s military.

The roots of the CCP’s psychological warfare go deep, and its tendrils can be seen crawling rampant across Western media in the form of Twitter bots, sponsored newspaper articles, and state-sponsored misinformation. And the onslaught has been going on for decades.

The CCP’s current efforts can be traced back to the 1999 book “Unrestricted Warfare.” Written by two retired PLA colonels, the book described the strategy and operations through which China could overcome the United States—without being embroiled in kinetic warfare.

“Unrestricted Warfare” argues that the United States’ weakness was the widespread belief among American military and political leadership that military dominance was solely dependent on technological means, rather than legal, economic, or social factors.

The book, therefore, advocated the use of lawfare, economic warfare, terrorism, and data and supply chain network disruption as various means of undermining the U.S. military.

Much of the book’s proposed strategy was later codified as the Three Warfares Strategy in a 2003 document published by the PLA and titled Political Work Guidelines of the People’s Liberation Army.

Since then, the CCP has worked tirelessly to adapt the Three Warfares Strategy to the social media era, using social networking platforms as tools of war to combat the minds of the Party’s enemies. Moreover, the introduction of Three Warfares has helped to underscore the promulgation of military-civil fusion, a CCP strategy that seeks to erode any boundary between civilian and military spheres, thus accelerating the erosion of distinctions between war and peace.

To that end, it’s vital to understand that the PLA isn’t a military of the Chinese state, but a wing of the Chinese Communist Party. Thus, the entire military apparatus of China is designed to defend and promote communism first and foremost.

How the Chinese military serves the whims of the CCP rather than the interests of the Chinese people was elucidated by retired Air Force Brig. Gen. Robert Spalding during an interview with EpochTV’s “China Insider” on May 12.

“Unlike a national army dedicated to the defense of a state and its people, the Chinese military’s purpose is to create political power for the Party.”

According to a report (pdf) by the U.S.–China Economic and Security Review Commission, U.S. leadership believed for years that the CCP’s psychological warfare efforts were a thing of the past.

Such beliefs were proven wrong, however, with the rise of CCP leader Xi Jinping in 2012, whose rule has overseen a resurgence of Party initiatives pushing psychological operations as a core part of Chinese national strategy.

Xi has referred to the work of organizations that engage in psychological operations for the CCP as China’s “magic weapons.” Those organizations include, most predominantly, the General Political Department within the PLA and the United Front Work Department, the latter of which is charged with overseeing the regime’s overseas influence operations and answers directly to the CCP’s Central Committee.

Indeed, since the ascension of Xi, Chinese state-run news agency Xinhua has gone so far as to explicitly characterize the PLA’s psychological warfare and political work as “thoroughly implement[ing] Xi Jinping’s thoughts on socialism with Chinese characteristics in the new era.”

Importantly, according to the Johns Hopkins report, the CCP’s psychological warfare units under Xi have sought to leverage social media as a key component of “cognitive domain operations” in order to scale Chinese propaganda to a global audience, and to sway, anger, and misinform the citizens of foreign nations to the benefit of the Party.

“China uses the tools of information and finance to advance political warfare on a global scale,” Spalding said.

“It’s a type of warfare that is completely alien to the way that we think of warfare.”

Thus, while U.S. military leaders and members of Congress have harped on budget proposals and the number of ships being built for the Navy, the CCP has already committed itself to winning a war without firing a shot.

At the heart of the CCP’s efforts to assault the minds of the American public, then, is the critical ability of social media and related technologies to create content that can have a real-world effect.

“The PLA is developing technologies for subliminal messaging, deep fakes, overt propaganda, and public sentiment analysis on Facebook, Twitter, LINE, and other platforms,” according to a report by the RAND Corporation (pdf).

“Other articles also suggest that the PLA could blackmail or tarnish the reputation of politicians as well as co-opt individual influential civilian social media users to extend the reach of Chinese propaganda while obfuscating its Party origins.”

It’s through this “hostile social manipulation on foreign platforms” that the CCP can essentially launder state-backed propaganda through proxy channels in the way a mobster might launder ill-gotten gains through a front organization. By obfuscating the origin of social media posts and using technologies such as deep fakes, the Party can more effectively diminish American confidence in the United States’ ability and worthiness.

“What they’ve been able to do is use proxies in the West to have the same control over the narrative in the West that they have within China,” Spalding said.

“We have no institution in the West that is tasked with understanding this form of warfare.”

Spalding’s comments are in line with recent remarks made by U.S. Secretary of State Antony Blinken, who said that the CCP was exploiting the United States’ free and open information channels and social media networks to promote authoritarianism abroad and strike at the heart of American democracy.

‘Ghosts in the Machine’

The sudden appearance of a recruitment video for psychological warfare units in the U.S. military is perhaps not such a mystery, given the battles being waged against the American mind.

The primary objective of the CCP’s efforts is to create doubt, fear, and exhaustion to such an extent that American leadership will make mistakes in planning and executing strategy. Likewise, the U.S. Army’s “Ghosts in the Machine” video lifts the mirror on the effort.

“Anything we touch is a weapon,” the video says, before flashing the motto of the 4th Psychological Operations Group, “Verbum Vincet”—”the word will conquer.”

The message is clear enough, China’s transnational campaign of repression and psychological terror is not without recourse. The psychological warfare apparatus of the American military and intelligence communities have changed history before and can do it again.

It’s surely not by accident that images of the famous Tiananmen Square protests were interlaced with videos of pro-democracy revolutions, or that footage of the PLA marching was juxtaposed with the fall of the Soviet Union.

The United States has toppled great powers from within and from without, the video implies, and can do so again.

As the video so abruptly states, “We are everywhere.”