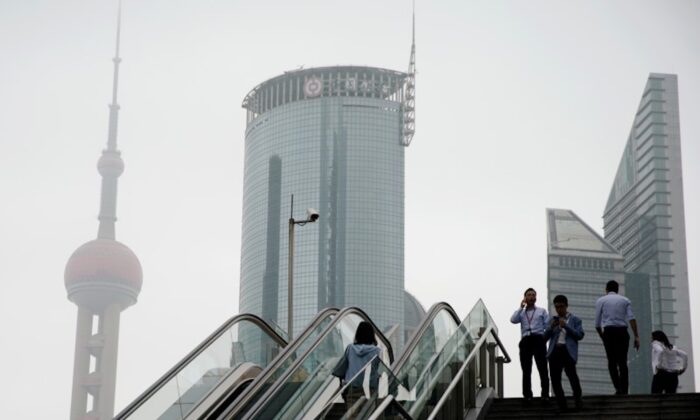 People walk near skyscrapers at Lujiazui financial district in Shanghai, China on May, 16, 2019. (Aly Song/Reuters)
By Reuters

BEIJING—New bank lending in China hit a record of 16.81 trillion yuan ($2.44 trillion) in 2019 as the central bank eased policy to support a slowing economy hobbled by weak global demand and the Sino-U.S. trade war.

The central bank has cut borrowing costs to shore up business activity and more monetary easing and fiscal stimulus is expected this year to spur growth, analysts say.

The signing of an initial U.S.-China trade deal this week will help lower economic risks but won’t stop Beijing from rolling out more policy measures to weather the downturn.

The People’s Bank of China (PBOC) has tried to boost bank lending and lower financing costs in the past two years, especially for smaller and private companies which generate a sizable share of the country’s economic growth and jobs.

Chinese banks extended 1.14 trillion yuan in new yuan loans in December, down from 1.39 trillion yuan in November and falling slightly short of analyst expectations, data from the PBOC showed on Jan. 16.

“Growth in outstanding broad credit was unchanged last month as a slowdown in bank loans outstanding was offset by an easing contraction in shadow credit,” Capital Economics said in a report.

With recent easing measures having little impact so far on credit growth, that could strengthen the case for additional rate cuts, the research firm said.

Outstanding yuan loans grew 12.3 percent from a year earlier, a notch below 12.4 percent growth forecast by analysts and November’s pace, which was also 12.4 percent.

Analysts say faster credit expansion will be key to stabilizing economic growth, which cooled to 6 percent in the third quarter of 2019, the slowest since the early 1990s.

Sun Guofeng, head of monetary policy department of PBOC, told a news briefing that China’s reserve requirement ratio (RRR) was at an appropriate level and there was limited room for further cuts.

To spur lending, the PBOC has cut the amount of cash banks must keep in reserves eight times since early 2018 and pumped out trillions of yuan in liquidity.

China will make timely adjustments to benchmark deposit rates, and should pay more attention to changes in real interest rates when discussing whether to cut interest rates, Sun said.

“Benchmark deposit rates will be kept for a long time,” Sun said. “In the future, the PBOC will make appropriate and timely adjustments by considering economic growth, prices and fundamentals, based the on the State Council’s arrangement.”

The PBOC has also lowered its key lending rate in recent months, with more cuts expected possibly before the end of this month.

Growth of outstanding total social financing (TSF), a broad measure of credit and liquidity in the economy, was up 10.7 percent in December from a year earlier, in line with November’s growth.

China had allowed local governments to issue more debt in 2019 as part of a plan to accelerate infrastructure spending and stoke domestic demand.