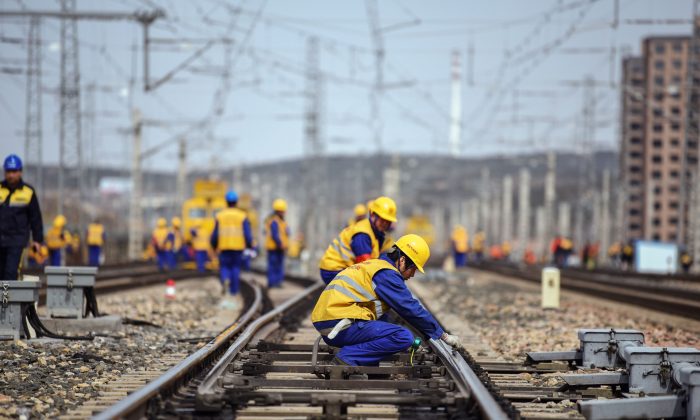 Chinese officials are rolling out 1 trillion yuan ($145.6 billion) in local government special bonds to stimulate the economy and avert mass layoffs. Local governments are expected to spend the money on infrastructure.

The announcement was made by the Ministry of Finance in November 2019. The special bonds come from the 2020 quota and was released earlier this year—ahead of schedule, as these bonds typically are issued in March.

In the first two weeks of January, provincial and municipal governments in Henan, Sichuan, and Hebei provinces received approximately 187.5 billion yuan ($27.3 billion) of the special bonds. It’s expected that total special bonds granted to local governments across the country will exceed 600 billion yuan ($87.4 billion) in January, and these funds are dedicated to major local projects, Yicai Global, a Chinese financial publication, reported on Jan. 12.

Wuhan, the capital of Hubei Province, announced Jan. 11 that a number of major projects funded by the special bonds, including those in the service, industrial, social welfare, infrastructure, and agricultural sectors, have recently begun.

The aggregated investment for all projects reached 271.25 billion yuan ($39.5 billion). Infrastructure projects account for 43 percent of the total investment.

Henan Province named its 2020 project “making up our shortcomings,” and announced a plan to inject 2 trillion yuan ($291.3 billion). Zhengzhou, capital of Henan Province, initiated a series of major projects in January, with a total investment of 30.9 billion yuan ($4.5 billion), according to Yicai Global.

“Traditionally, China relies on international trade, domestic spending, and investment to drive its economy. Now, only one option is left—investment. Chinese authorities are forced to go back to heavily investing in infrastructure,” Wen said. “Although it will indeed help to improve GDP [gross domestic product], the new debt on China’s already high debt levels will eventually lead to a ‘debt explosion.’”

This is especially true for the infrastructure projects, where the return on investment is low. Borrowers will have to keep borrowing money to repay the old debt, which, in turn, will one day burst a big bubble, he added.

Wen also pointed out that with unemployment rising, the Chinese regime worries about social stability and that some insiders in China’s construction industry revealed that 60 percent of construction workers are presently unemployed.

“Investing in infrastructure can not only drive GDP growth, but also help ease the unemployment problem,” he said.