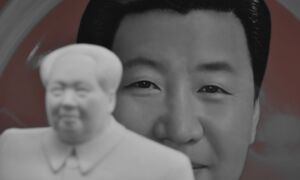 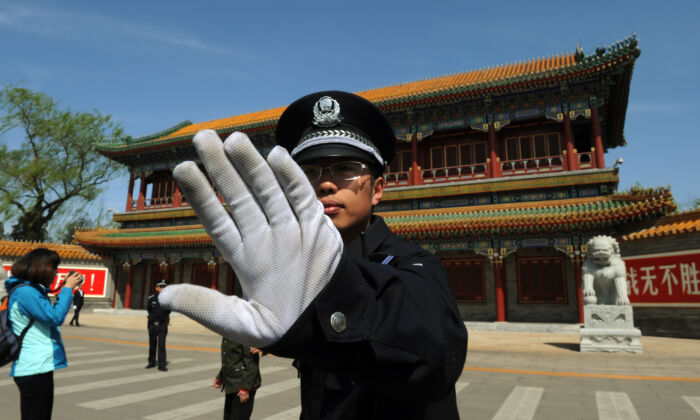 In this file photo, a policeman blocks photos from being taken outside Zhongnanhai, the central headquarters for the communist regime in Beijing. (Mark Ralston/AFP/Getty Images)
Chinese Regime

Dong Jingwei, who has been rumored to be a high-ranking defector to the United States, attended a meeting in Beijing on June 23, according to the Chinese Ministry of Public Security (MPS).

The MPS announced on its website that Dong participated in the Shanghai Cooperation Organization (SCO) security meeting in Beijing on Wednesday, as a member of the China team which was led by Zhao Kezhi, China’s public security minister.

In the announcement, the ministry released a photo, in which Dong was sitting at the right end of the table.

This is the first time that the Chinese regime has released a photo of Dong’s existence in China after the rumors began that Dong had fled China in February and quickly contacted the Defense Intelligence Agency (DIA) after arriving in the United States. An unnamed U.S. administration official, however, has reportedly dismissed the reports.

China’s State Council and the state-run media also reported the SCO security meeting, but didn’t mention Dong’s participation, nor did they attach any photo. The Epoch Times has not been able to independently confirm Dong’s whereabouts.

Dong, 57, has been a Chinese vice minister of state security and head of counterintelligence for the Chinese Ministry of State Security, the regime’s top spy agency, since 2018.

In June, overseas Chinese media and some U.S. outlets reported that Dong had defected and fled to the United States with his daughter. The rumors alleged that Dong handed over sensitive intelligence to U.S. authorities. The reports, however, have been described as “not accurate” by an unnamed U.S. government official, according to a June 22 report by Spy Talk, a newsletter covering U.S. intelligence.

SCO is an organization that China, Russia, Kazakhstan, Kyrgyzstan, Tajikistan, and Uzbekistan set up in 2001, with the purpose of strengthening bilateral and multilateral cooperation.

In 2017, the organization expanded to India and Pakistan. Now, it has Afghanistan, Belarus, Iran, and Mongolia as observer members and Azerbaijan, Armenia, Cambodia, Nepal, Turkey, and Sri Lanka as dialogue partners, according to the Chinese Foreign Affairs Ministry.