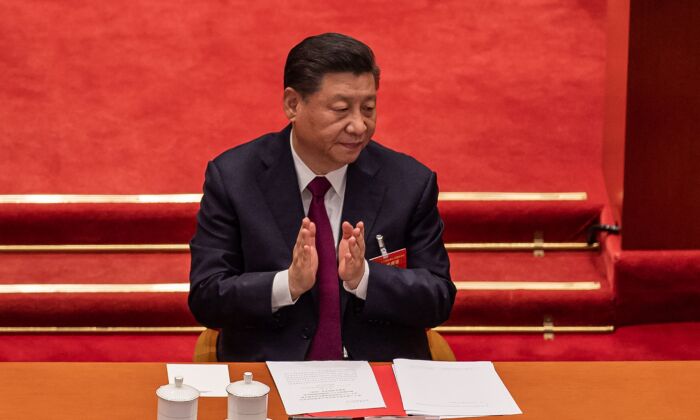 Chinese Communist Party leader Xi Jinping applauds during the closing session of the National Peoples Congress at the Great Hall of the People in Beijing on March 11, 2021. (Nicolas Asfouri/AFP via Getty Images)
US-China Relations

Chinese leader Xi Jinping recently led all high-ranking officials in Beijing to retake the loyalty oath and pledge their allegiance to the Chinese Communist Party (CCP).

The move comes amid rumors circulating on overseas Chinese media and some U.S. outlets about top Chinese security official Dong Jingwei who allegedly defected earlier this year and fled to the United States with his daughter.

All 25 members of the Politburo—the top decision-making body of the CCP—and other top officials such as chairs of the secretariat, state councilors, the president of the supreme court, the chief prosecutor, and senior members of the rubber-stamp legislature (the National People’s Congress) and the Central Military Commission, retook the Communist Party oath at the History’s Exhibition Hall in Beijing on June 18.

The pledge included the statement: “Be ready at all times to sacrifice my all for the Party … never betray the Party.”

Before taking the oath, Xi asked all CCP leaders to “maintain a high degree of consistency with” the Party, in terms of ideology, politics, and action.

On June 19, China’s top watchdog, the Central Commission for Discipline Inspection (CCDI), asked all CCP members to fight against traitors and to never betray the Party.

Tang Jingyuan, a U.S.-based China affairs commentator believed that these actions were a response to “some CCP senior officials who have betrayed the Party recently.”

Beijing recently released information that Dong, a vice minister of state security at the center of the rumors, was still in China. The Chinese Ministry of State Security (MSS), the regime’s top spy agency, published on its official website that Dong hosted a counterintelligence seminar in the ministry on the morning of June 18. But the announcement didn’t mention whether the seminar was held in person or online, or who participated in it.

Overseas Chinese media and several American media reported this month that Dong fled China via Hong Kong and arrived in the United States in mid-February with his daughter. He then contacted the Defense Intelligence Agency (DIA), which is harboring Dong now, according to various reports.

There are different versions of the story about Dong’s defection from various U.S. media outlets. According to one rumor, Dong visited California because his daughter Dong Yang is studying there. Another said Dong used his Chinese private passport and traveled with his daughter who holds a Hong Kong passport. Chinese officials have two passports—an official passport and a private one.

But all the rumors point to the same story that Dong handed over to the DIA a large number of documents, which include evidence that the Wuhan Institute of Virology (WIV) was performing biological warfare research and the COVID-19 pandemic was caused by a virus that leaked from the lab, according to The Daily Beast.

The Epoch Times was unable to verify the rumors.

Dong, 57, has worked at MSS since April 2017. Prior to taking up that post, he served as director of the department of national security of Hebei Province in northern China.

In his first year in Beijing, Dong was director of the political department of MSS. Then he was promoted to deputy minister and became the head of counterintelligence for MSS.

As a senior official, Chinese government and state-run media websites used to have Dong’s photos and resumes. But after the rumors of Dong’s defection began to circulate, his photos, resumes, and related news were removed from almost all websites, but they can be found on archived web pages.