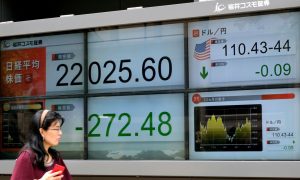 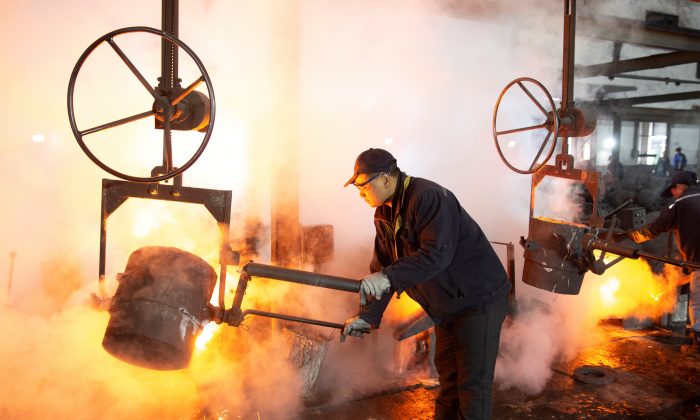 BEIJING—China’s factory activity contracted for a third straight month in February but at a slower pace, helped by improvements in domestic manufacturing, a private survey showed on March 1.

The readings—closely watched by investors as an alternative to the official data and more focused on smaller firms—offered further evidence China’s economy is losing momentum and suggests the U.S.-Sino trade war will continue to weigh on exports as prospects for a trade deal remain uncertain.

The Caixin/Markit Manufacturing Purchasing Managers’ Index (PMI) for February rose to 49.9 from 48.3 in January—staying below the neutral 50-mark dividing expansion from contraction on a monthly basis for a third month.

Economists polled by Reuters had forecast a sharper deterioration for February of 48.5.

The figures were more upbeat than the official survey on Thursday—which showed business sentiment in the sector dropped to a three-year low and export orders fell to their lowest in a decade—indicating a marginal improvement in domestic demand as a flurry of policy stimulus kicked in from late last year.

“Domestic manufacturing demand improved significantly, and foreign demand was not deteriorating as quickly as last year,” Zhengsheng Zhong, director of macroeconomic analysis at CEBM Group, said in a commentary accompanying the data release.

Total new orders edged back to expansionary territory in February at 50.2, compared with January’s 47.3 and ending two months’ of contraction, with output prices growing for the first time in four months.

The stronger-than-expected PMI data gave the Australian and New Zealand dollars a lift.

Zhong said the recovery was due to more robust domestic demand.

But new export orders fell in February after a brief rebound in the previous month, and purchasing activity declined for the second straight month, likely due to still soft demand.

Chinese manufacturers signaled a deterioration in vendor performance during February. Factories also continued to cut costs by shedding staff for the 64th straight month, at a sharper pace than the previous month.

“The pressure on manufacturers’ capital turnover became obvious again, which may reflect that the financing environment was not easing as expected, and the effect of credit expansion is not yet significant,” Zhong added.

President Donald Trump warned on Thursday he could walk away from a trade deal with China if it were not good enough, even as his economic advisers touted “fantastic” progress towards an agreement to end a dispute with the Asian country.

“The upshot is that it is probably too soon to call the bottom of the current economic cycle,” Julian Evans-Pritchard, senior China economist at Capital Economics, wrote in a note after the survey. “Indeed, we expect growth to continue to come under pressure until the middle of this year.”