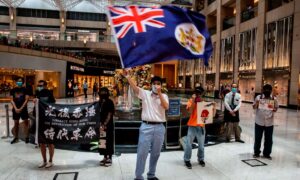 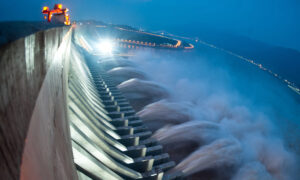 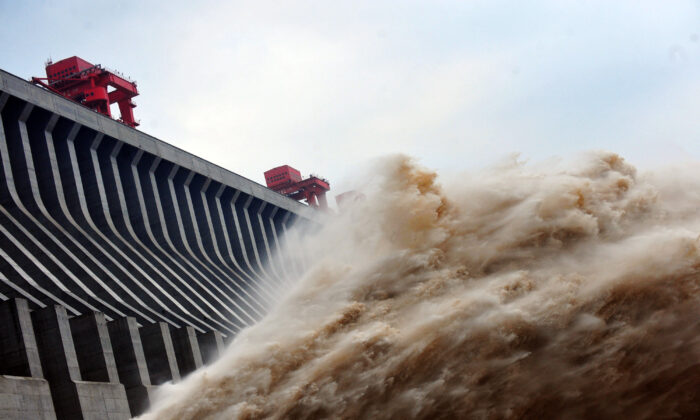 China’s controversial Three Gorges Dam, the largest hydropower project in the world, has drawn scrutiny for its structural flaws and environmental damage ever since its construction was first proposed in the 1950s.

As torrential rainstorms are currently sweeping through half of China, a hydrology expert warns that the dam could collapse under the added pressure, endangering the lives of millions who reside nearby.

Widespread flooding has affected at least 11.2 million people in 26 Chinese provinces and municipalities across central and southern China since heavy rainfall began wreaking havoc in early June. More than 9,300 houses have tumbled and 171,000 others have sustained damage. The financial damage has surpassed 24.1 billion yuan ($3.4 billion), according to local authorities.

The record rainfall is forecasted to continue for another 10 days.

In Guizhou, a mountainous province in China’s southwest, the stormwater at one point rose to 16 feet higher than acceptable thresholds.

The flooding in Yanhe County caused water to cascade over a bridge and wash away houses underneath.

“It’s a hotpot in water,” Mr. Liu, a resident of Qijiang County, in the southwestern city of Chongqing, said in an interview. The flooding, he said, is “sounding a warning to the rest of China.” If the nearby Three Gorges Dam cannot withstand the water right now, the lower reaches of the Yangtze River, one of the country’s most fertile and populous regions, would be in serious trouble, he predicted.

‘Pressed From Both Ends’

Built with the stated objective of taming the flood-prone Yangtze River and generating clean energy, the massive 180 billion yuan ($25.4 billion) project has been plagued by corruption and environmental costs. Authorities’ forced relocation of over 1 million residents further fueled public anger.

“Whether the Three Gorges can play a role in preventing flooding in the current situation, or if the Chinese government has deceived the Chinese public from the beginning—this has been made pretty clear for people throughout the years,” Wang Weiluo, a Chinese hydrologist who is currently residing in Germany, told The Epoch Times.

The Yangtze River runs through 11 Chinese provinces and regions in central and western China, including Tibet, Sichuan, Chongqing, Hubei, and Shanghai. Many regions have a water level below that in the dam’s reservoir, placing them “directly under the water currents” during times of flooding, Wang said.

Authorities have for years hushed voices critical of the dam.

Reached by The Epoch Times on June 23 about the Three Gorges, Fan Xiao, a senior engineer in the state-owned Sichuan Bureau of Geological Exploration and Exploitation of Mineral Resources, said his superiors had instructed him earlier in the day “not to take any foreign media interviews.”

Fan did, however, write extensively about issues surrounding the Three Gorges Dam. One article in 2004, for example, explored the issue of reservoir-induced earthquakes and landslides. Another, in 2016, questioned the dam’s “net capacity” in flood mitigation, after accounting for the cost of destroying local habitats.

There’s also a fundamental conflict between people in the upper reaches and the lower reaches, Wang said. When there’s heavy rain, the former wants the water discharged, while the latter cannot deal with the additional flooding.

“The Three Gorges is pressed from both ends,” he said. Currently, the reservoir has kept a water level lower than normal to ensure the dam’s safety.

A glance at Chinese media reports over the years conveys a diminishing sense of confidence in the dam.

In 2003, an article headline from state media Xinhua said the dam could withstand a once-in-a-10,000-year flood; the wording was changed to 1,000 years in 2007, then 100 years in 2008; and in 2010, a TV anchor at state broadcaster CCTV cited the Changjiang Water Resources Commission, which has direct oversight over the Yangtze River Basin, saying that people “cannot place all their hopes on the Three Gorges Dam.”

The structural integrity of the dam itself triggered widespread debate last year after a satellite image of the dam purportedly showed a curvature, raising fears that it may break.

While the operating company of the Three Gorges dam has dismissed the concerns by pointing to potential inaccuracies with Google satellite images, it later admitted in a social media post that the dam had moved by up to 1.05 inches. The company said it was within acceptable margins.

Authorities said they are discharging floodwater at around 980 water reservoirs along the Yangtze River, while they have hesitated to release the water inside the Three Gorges Dam, despite the level reaching a two-meter excess (6.6 feet)—citing concerns about sudden flooding. But netizens recently circulated a video accusing authorities of secretly discharging the dam water without giving advance notice, worsening their plight.

Wang is urging people living near the dam to prepare emergency kits to protect themselves. “The Chinese Communist Party will never take responsibility for it … Every death is just a number” to the regime, he said.

Mr. Chen, a resident of Sichuan Province, worries that something more catastrophic could befall China in the future under the regime’s mismanagement.

“The government made this [dam] a show project,” he told The Epoch Times’ sister media NTD. “After the disastrous consequences, commoners always foot the bill.”