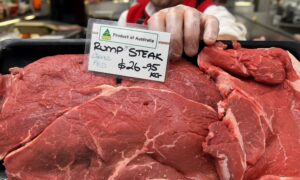 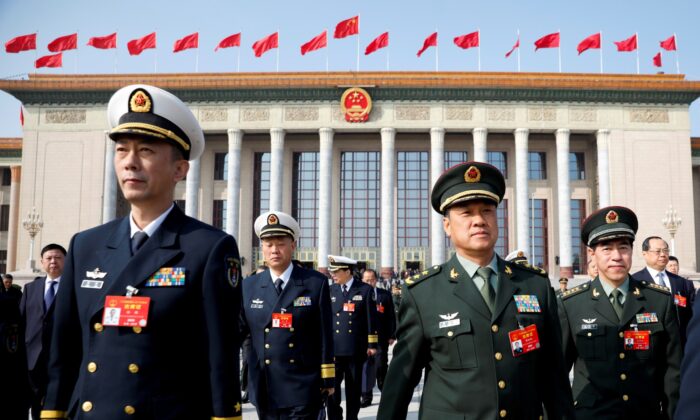 Military delegates leave the Great Hall of the People after a meeting ahead of National People's Congress (NPC), China's annual session of parliament, in Beijing, China, on March 4, 2019. (Aly Song/File Photo/Reuters)
Chinese Regime

BEIJING—China, facing what it sees as increasing military pressure from the United States, is likely to shrug off the pall hanging over its economy from the CCP virus and increase its defense budget again this year.

China’s military spending, due to be announced at the opening of the annual meeting of its rubber-stamp legislature on May 22, is closely watched as a barometer of how aggressively it will beef up its military capabilities.

China set a 7.5 percent rise for the defense budget in 2019, outpacing what ended up as full-year gross domestic product (GDP) growth of 6.1 percent in the world’s second-largest economy.

Its economy shrank 6.8 percent in the first quarter of 2020 from a year earlier, as the CCP (Chinese Communist Party) virus spread from the central city of Wuhan where it emerged late last year, and the government has said economic conditions remain challenging.

Despite the CCP virus outbreak, the armed forces of China and the United States have remained active in both the disputed South China Sea and around Chinese-claimed Taiwan.

Xie Yue, a professor of political science at Shanghai’s Jiao Tong University and a security expert, said that while it is hard to predict if the defense budget would grow at a higher or lower rate than last year, it would definitely rise.

“From the national security point of view, China needs to appear strong to the West, especially the United States, which has been putting more pressure on China on all fronts,” he said.

The CCP virus has worsened already poor ties between Beijing and Washington, with accusations from the Trump administration of a Chinese coverup and delayed release of information about the outbreak.

The Ministry of State Security warned in a recent internal report that China faced a rising wave of hostility in the wake of the CCP virus outbreak that could tip relations with the United States into armed confrontation.

“Even if the government cuts everything else, it won’t cut defense,” said Tang Renwu, dean of Beijing Normal University’s school of public administration.

The Defense Ministry did not respond to a request for comment. China routinely says spending is for defensive purposes only, is a comparatively low percentage of its GDP, and that critics just want to keep the country down.

China reports only a raw figure for military expenditure, with no breakdown. It is widely believed by diplomats and foreign experts to under-report the real number.

Hu Xijin, editor of the state-run Global Times newspaper, wrote in a WeChat post on Monday that he anticipated the defense budget would rise.

“China needs more military power as a deterrent, to ensure the U.S. will not act on its impulses because of unbearable costs,” Hu said.

Hu had previously argued that China should expand its stock of nuclear warheads to 1,000, including “at least 100 DF-41 strategic missiles,” an intercontinental missile capable of striking the continental United States.

China’s 2019 defense spending represented slightly over 5 percent of total government expenditure and about 1.2 percent of GDP for the year.

Xie said China could invest further in home-grown military technology research and development, as tightening sanctions meant it was increasingly hard for China to buy technology on the global market.