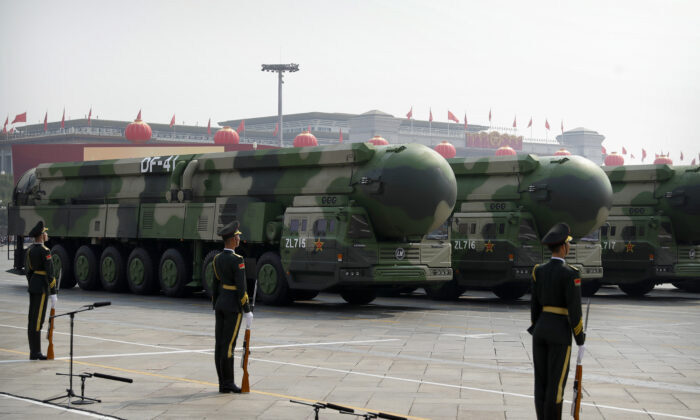 China Needs More Nukes to Counter the US: Editor of Chinese State-Run Newspaper

China should expand its stock of nuclear warheads to 1,000 to counter the challenges posed by the United States, chief editor of the Chinese state-run Global Times newspaper argued in a May 8 social media post.

The communist regime’s nuclear arsenal should include “at least 100 DF-41 strategic missiles,” said Hu Xijin, who is known for his hawkish stance on foreign relations.

The DF-41, unveiled in mid-2019 by the rocket force of China’s military, the People’s Liberation Army (PLA), is estimated to have a 12,000- to 15,000-kilometer range, the longest nuclear operating range in the world, and is capable of striking the continental United States.

“We love peace and promise not to use nuclear weapons first, but we need a bigger nuclear arsenal to suppress U.S. strategic ambition and impulse against China,” Hu wrote in a post on Weibo, China’s Twitter-like social media platform. He posted a similar message, written in English, on Twitter, which is banned inside China.

“Don’t think that nuclear warheads are useless during peacetime. We are using every one of them, silently, to shape the attitudes of American elites toward us,” he said on Weibo.

The Global Times is a controversial newspaper published by the People’s Daily, the Communist Party’s main mouthpiece. It often focuses on international issues, and regularly stirs up nationalist sentiment with inflammatory editorials.

Asked about Hu’s post, Hua said, “I think you should ask him directly. In China, there is freedom of speech.”

But Hu’s latest comments have been given prominent coverage in Chinese state media.

The Global Times published an editorial on Friday afternoon in both Chinese and English, doubling down on the issue of nuclear armament.

“China needs to prepare for a long-term challenge,” said the English-language editorial, adding that “we should strengthen and enhance our core scientific technology and military strategic power.”

“Although the U.S. advantage in terms of conventional military strength in China’s offshore waters is dwindling, its superiority in nuclear weapons remains overwhelming, which is the biggest pillar that bolsters U.S. military arrogance toward China,” it said.

“Therefore, it’s an urgent task for China to expand its nuclear arsenal and strengthen its strategic strike capacities,” concluded the editorial, which was widely re-posted on other mainland Chinese news portals.

The paper’s English-language edition also published a full translation of Hu’s Weibo post, and an article quoting Chinese military experts as saying that “it is possible that China and the U.S. might engage in a regional conflict,” and that “If a nuclear weapon is dropped on China, Chinese nuclear weapons must be sufficient to wipe out the enemy in retaliation.”

Rick Fisher, a senior fellow at the International Assessment and Strategy Center, told The Epoch Times that these actions were likely indicative of the Party’s intentions. “Global Times editor-in-chief Hu Xijin’s Weibo posting, the Global Times verbatim reprint, then an expanded Global Times article on the need for China to significantly expand its nuclear arsenal is about as close to a Chinese Communist Party press release on this subject we will ever get,” he said in an email.

Trump has repeatedly argued for China to join the United States and Russia in an arms control accord to replace the 2010 New START treaty between Washington and Moscow that will expire in February 2021.

The Stockholm International Peace Research Institute (SIPRI) estimated last June that China might have about 290 nuclear warheads. But Joseph Bosco, a former China country desk officer at the U.S. Office of the Secretary of Defense, said the regime may have well over 1,000 nuclear weapons already.

“As Russia and the U.S. have been reducing their numbers (at least Washington has, we can never be sure of Moscow’s cheating either), China has been building up its arsenal, with the apparent goal of meeting or surpassing their nuclear competitors,” Bosco wrote in an email to The Epoch Times.

The Chinese regime has repeatedly rejected Trump’s arms control proposal, arguing that its nuclear force is “defensive” and “poses no threat.”

But senior PLA officers have previously issued threats that Beijing may launch nuclear attacks on the United States.

Zhu Chenghu, a PLA major general and dean of the Defense Affairs Institute for China’s National Defense University, told the Wall Street Journal in 2005, “If the Americans draw their missiles and position-guided ammunition on to the target zone on China’s territory, I think we will have to respond with nuclear weapons.”

He added that the Chinese “will prepare ourselves for the destruction of all of the cities east of Xi’an. Of course the Americans will have to be prepared that hundreds … of cities will be destroyed by the Chinese.”

In 1995, PLA general Xiong Guangkai told Chas Freeman, who was previously an assistant secretary of defense at the U.S. Department of Defense, that China would attack the United States—possibly with nuclear weapons—if a war over Taiwan broke out.

These were not just empty threats, according to Rick Fisher.

“The CCP’s lying and lack of remorse for the China Virus [commonly known as novel coronavirus] should remind us that the CCP…may have little regard for using nuclear or biological weapons on its enemies,” Fisher told The Epoch Times.

“Right now, the main enemies of the CCP are the nations now uniting to deny the CCP what it wants most: global hegemony, control of global prosperity and sovereignty,” he said.