US losing talent to recruitment program meant to help make China No. 1 in high tech 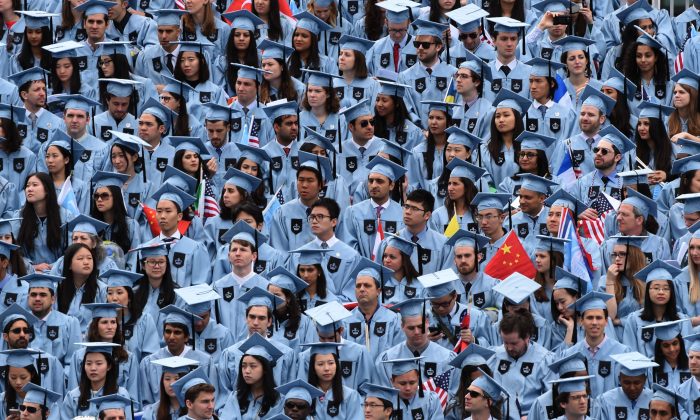 As part of an ambitious plan to become the world leader in advanced technology, China is wooing talent from abroad—both ethnic Chinese and foreigners—to help the country gain an edge.

The Chinese regime introduced the Thousand Talents Plan in December 2008 to aggressively recruit promising workers in the science and technology fields. Multiple parts of the Chinese regime are involved, including the Central Organization Department, Central United Front Work Department, Ministry of Foreign Affairs, Overseas Chinese Affairs Office of the State Council, and the Chinese Academy of Sciences (CAS), according to the program’s official website.

More than 7,000 top-level Chinese and foreign professionals, experts, and entrepreneurs who studied or lived abroad have returned to China under the program, reported the website in November, with most of them from top colleges and universities, research institutes, and international companies around the world. The program counts six Nobel Prize winners among its participants.

Should top Chinese talents return to China, they receive a one-time package of 1 million yuan ($151,140) and are guaranteed employment with a leadership or professional position at a university, research institute, or state-owned enterprise, to name a few.

Should top Chinese talents return to China, they receive a one-time package of 1 million yuan.

The program also targets non-Chinese experts, who receive, in addition to their salary, a lump sum of 1 million yuan in research subsidies and an additional 3 million to 5 million yuan ($453,450 to $755,400) granted through employers. They are required to work for more than nine months per year in China for three consecutive years.

In the late 2000s, the package it offered was bumped up to 2 million yuan for each of the roughly 100 candidates it recruited each year. According to China’s biggest search engine Baidu, the CAS program had successfully recruited about 1,200 individuals as of 2009, with 29 of them nominated to be academicians at CAS.

Foreign Stars and Love of the Motherland

The Thousand Talents program has recruited some star academics from abroad. Lee Chang-hee, a South Korean professor who currently heads China’s Liangjiang International College of Chongqing University of Science and Technology, was the former chief technology officer of fiber optics company Novera Optics Korea and a professor at Korea Advanced Institute of Science and Technology, which is highly ranked for innovation. He is a renowned researcher in optical communications systems and has authored more than 400 academic papers and registered over 130 patents. He was named a fellow of the U.S. Institute of Electrical and Electronics Engineers.

According to an Aug. 2 report by Chinese news portal Sina, Lee received a one-time payment of 1 million yuan, plus 8 million yuan ($1.2 million) in research subsidies. In addition to his salary, he will receive an allowance—an amount not exceeding 60 percent of his salary—for three straight years, and other preferential benefits in housing, medical care, insurance, taxes, and preferential treatment in clearing customs when traveling.

Many Chinese professors in the United States have returned to China under the Thousand Talents program. For example, Deng Weiwei, an associate professor with a doctorate from Yale University, whose academic career included five years as an assistant professor at the University of Central Florida and two years as an associate professor of mechanical engineering at Virginia Tech, returned to China in April. He has since taken up a position as professor in the Department of Mechanics and Aerospace Engineering at China’s Southern University of Science and Technology, a public school under the administration of the Guangdong provincial government.

While it is not known exactly how much in salary and benefits Deng has received under the program, his desire to work in China was loud and clear. According to the program’s recruitment website, Deng said he anxiously followed news on his mainland Chinese friends’ social media to witness the successful launch of Tiangong-2, a Chinese space lab, on Sept. 15, 2016.

“I am afraid that it would be too late if I don’t come back [to China] soon. I don’t want to be on the sidelines watching my motherland’s development,” said Deng, according to the recruitment website.

The recruitment effort is not limited to the central authorities and state-run institutes. Provinces, cities, and universities all have their own recruitment programs to bring back overseas talent, appealing to nationalistic sentiments to woo them into helping the country get ahead.

According to the Beijing-based English news website Sino-US.com and Zhejiang’s provincial government website, Cui Ping, the former head of the Ningbo Institute of Industrial Technology held many job fairs overseas to recruit Chinese talent, including two fairs in Silicon Valley in December 2013. Cu successfully recruited more than 200 people to work at the Ningbo institute.

On Oct. 17, the state-run newspaper China Daily reported that Wuhan University, which is administered by China’s Ministry of Education, sent out a delegation headed by the university’s president to a recruitment event at the University of California–Berkeley.

Many successful Chinese businessmen who returned to China on their own have since been given the position of special consultant under the Thousand Talents program, so they can help recruit more talent back home. One well-known example is Robin Li, who returned to China at the end of 1999 after a successful career in the United States developing programs for The Wall Street Journal and working as a staff engineer for Infoseek, a search engine company.

In 2000, Li founded China’s Baidu search engine. He then successfully recruited Xu Wei, who left his position as senior scientist at Facebook to join Baidu’s Institute of Deep Learning, an artificial intelligence research lab, in 2013, according to Baidu. That same year, Li’s recruitment effort also brought in Wu Ren, who left his job at Advanced Micro Devices, an American semiconductor company, as chief software architect of heterogeneous system architecture.

China plans to become the world leader in advanced microchips and AI technology. While China still has a long way to go in developing its semiconductor industry, it currently ranks second behind the United States as the country with the highest number of AI firms.